9 billion light years away, this is the furthest star we’ve ever seen

We’re used to telescopes bringing us a glimpse of distant galaxies, but just how far away can we actually see through the universe? According to NASA, the answer is “more than halfway across”: the American space agency has released a new photo from the Hubble Space Telescope, and it’s mind-blowing in more ways than one.

The image shows a blue star that has been nicknamed Icarus, and it’s the farthest individual star that we’ve ever seen. Officially known as MACS J1149+2223 Lensed Star 1, it’s approximately 9 billion light years away from Earth. Light from the star began emitting 4.4 billion years after the Big Bang that created the universe, scientists believe.

At that distance, by all rights, we really shouldn’t be able to see Icarus. However, a combination of unexpected factors – including the universe acting as an impromptu extra set of lenses – have given us a far more distant peek across the light years than we could’ve achieved with Hubble alone.

It’s called gravitational lensing, and it’s possible because there’s actually another galaxy cluster in-between us and Icarus. Called MACS J1149+2223, it’s approximately 5 billion light years from Earth. Because of its massive size, its gravity acts as a natural lens in space, NASA says, bending and amplifying the light from Icarus behind it. 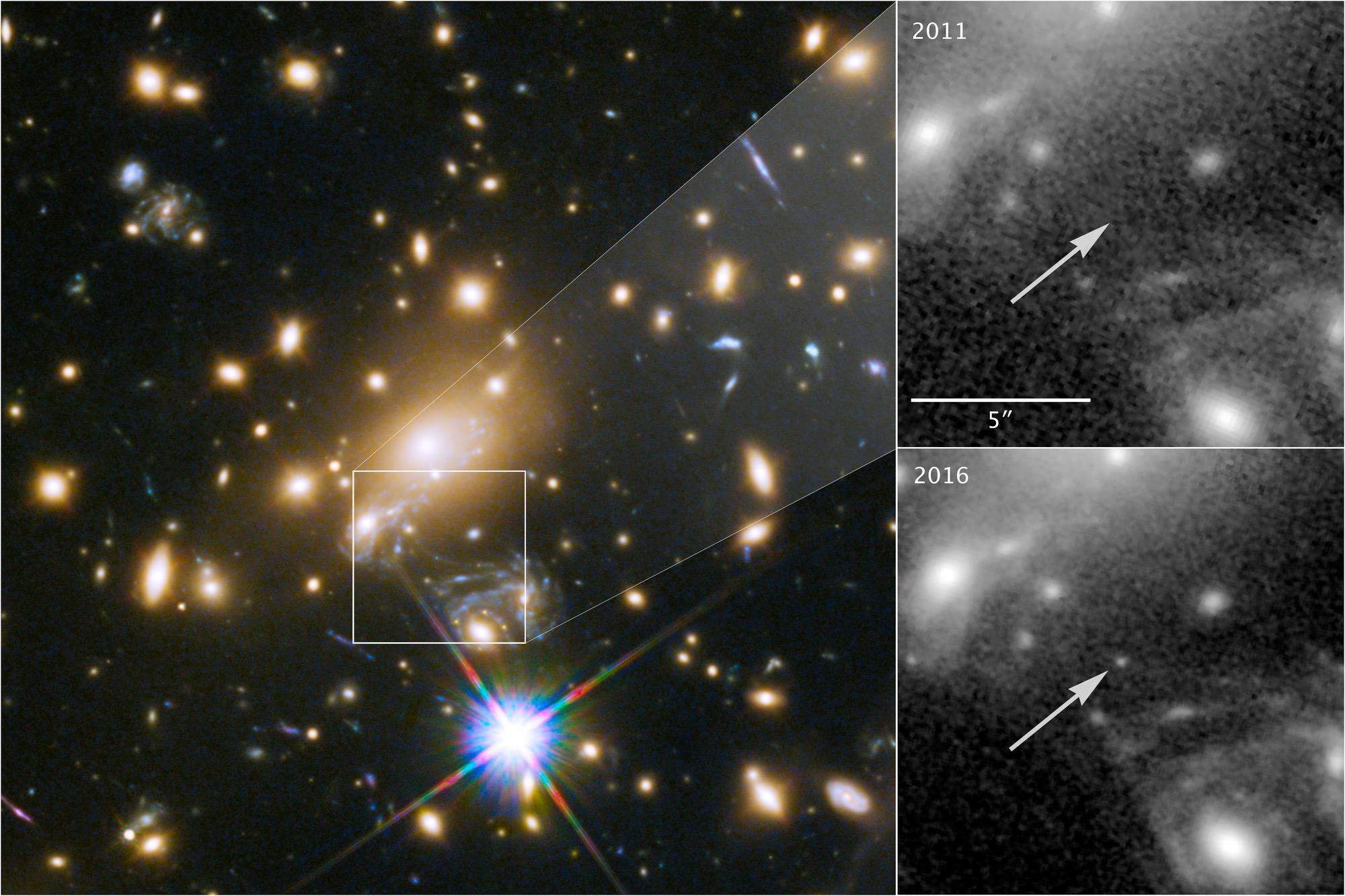 Combined with Hubble’s own optical excellence, the gravitational amplification of the light put out by the star allowed it to be studied for the first time. The first evidence came back in 2016, when a point of light was caught near a supernova in the galaxy cluster that the Hubble team was monitoring. However, unlike a supernova, the newly-spotted star wasn’t getting hotter or exploding.

Upon analysis, it was confirmed to be a blue supergiant star. Even though that could make it hundreds of thousands of times brighter than our own Sun, not to mention much larger and hotter, it still should be too dim, on its own luminance alone, to be visible with Hubble. That led the scientists to realize that it was being amplified by gravitational lensing.

It’s not just a neat observation, either. The astronomers could use the discovery of Icarus, and its amplification, to test the nature of dark matter. That’s the still-mysterious material that, though invisible, makes up the majority of the universe’s mass.

“By probing what’s floating around in the foreground cluster, scientists were able to test one theory that dark matter might be made up mostly of a huge number of primordial black holes formed in the birth of the universe with masses tens of times larger than the Sun,” NASA explains. “The results of this unique test disfavor that hypothesis, because light fluctuations from the background star, monitored with Hubble for 13 years, would have looked different if there were a swarm of intervening black holes.”

For the moment, Icarus is in a class of its own. However, the James Webb Space Telescope could well change all that. It will be considerably more sensitive than Hubble, and is expected to unlock even greater detail on distant stars, including whether they are rotating and more.