The Epson Moverio BT-100 is a pair of augmented reality glasses that, in the wake of the future success of Google Glass and the Occulus Rift, keeps itself unique with its own combination of abilities. This week SlashGear had a chat with Eric Mizufuka, Product Manager of New Markets at Epson and Scott Montgomerie, CEO and lead developer of Scope Technologies about the newest use of this still very developer-stage pair of futuristic glasses: augmented reality industrial product training.

As Eric Mizufuka explained this week, the Moverio BT-100 is “a wearable display – smartglasses – with a shade that’s removable.” What you’re seeing with these glasses is an image that can get as large as an 80-inch display depending on what you’re using them for, and they’re able to work with apps such as the one presenting 3D device augmented reality training that Scope AR is showing off this year. 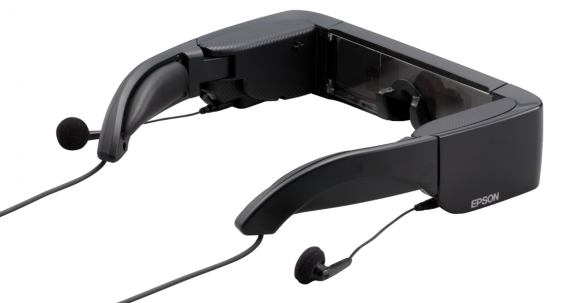 At it’s base, this device is powered by an Android control unit – it’s able to run and launch Android apps just like a smartphone would, so to speak. This product in its current form was launched over a year ago, and according to Mizufuka, the unit was and is “seen originally as more of a developer platform so developers could take the lead on creating apps that would eventually shape the device.”

Epson’s Moverio BT-100 glasses are not yet consumer market ready – they’re not yet in a place where they’re meant for the consumer market, instead concentrating on developer efforts to create “that one killer app” to start the machine that is the succssful launch of the platform.

As for how they fit into the augmented reality or “smart” glasses universe thats coming to light here in 2013, Mizufuka suggests that there’s a four-point set of categories that each unit in this new market fall into, each pair of said glasses working with two. 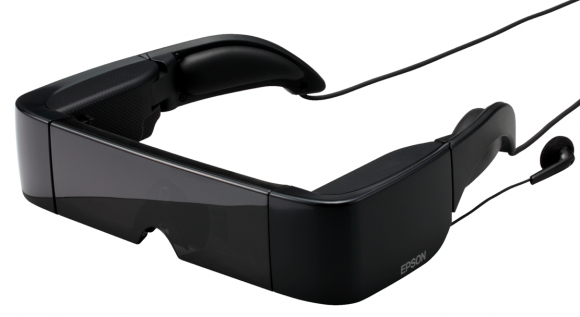 Epson’s product makes its way in the market with features that are, as Mizufuka suggests, rather unique. “[Moverio BT-100] is unique in that you can see 3D, and unique in that it’s in the center of your field of view so you can overlay 3D images over real objects.” This is what the company calls Real Augmented Reality.

[aquote]Glass is a beautiful product and it’s miniturized very well, but you still have some consumer kickback saying it’s too geeky.[/aquote]

Mizufuka let SlashGear know that they’d be creating the final consumer units as a product that people will want to use, one that they intend to be able to be worn by everyone. “Glass is a beautiful product and it’s miniturized very well, but you still have some consumer kickback saying it’s too geeky.”

CEO and lead developer of Scope Technologies Scott Montgomerie let us know that as soon as they discovered Epson’s augmented reality glasses, they knew they had to collaborate. Their need for such a solution for their idea to overlay machine parts in 3D for users training in the industrial market seemed like a perfect fit. “Industrial Augmented Reality for machinery, overlaying 3D images over real machines seemed impracticle at first – until the idea of augmented reality glasses, like Moverio BT-100, came up.”

Mounting a camera on top of the optics they’d already had, they created the device you see demonstrated here:

Montgomerie continued: “Our strategy is in the near term to focus on these verticle market applications. I think the consumer is just getting comfortable now with wearable displays, as soon as we’re able to find that killer app in the market, we’ll be there.” Sound like the right path to take to you? Epson’s Mizufuka let it be known that the final consumer product would be both affordable and made for the mass market – and we’re hoping for more soon!