Motorola’s DROID HD has been caught on camera, offering a sizable 4.5-inch touchscreen squeezed into a surprisingly slender chassis. Shared with Engadget by a lucky tipster that also spent some playtime with the DROID Bionic, the DROID HD has an 8-megapixel camera with autofocus and an LED flash, capable of 1080p Full HD video recording, and runs Android 2.3 Gingerbread.

There’s also microUSB and microHDMI connectivity, along with a microSD card slot. The screen resolution isn’t confirmed, but given the “HD” name it looks like qHD is a lock-in; similarly, there’s no suggestion of what processor Motorola has used, though the Bionic has a Texas Instruments OMAP 4430 1GHz dual-core.

Finally there’s a front-facing camera for video calls. Engadget guesstimates the DROID HD to be between 8.5mm and 9mm thick, which would make it just a little deeper than Samsung’s Galaxy S II. That would be an impressive feat, especially given the bigger display. 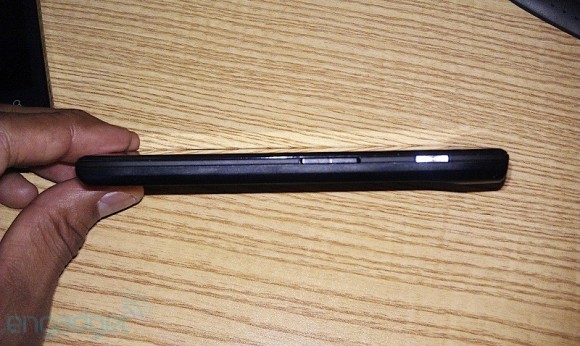