In a single post to a Google+ community, the newest Motorola “advisor” Guy Kawasaki has stoked a wildfire of suggestions for the upcoming so-called X Phone. This Kawasaki fellow was for many, many years an Apple/Macintosh evangelist, having “switched” to Android just this past year – and just this past month (February 27th, to be exact) – he joined Motorola as an advisor, focusing on, as he puts it: “product design, user interface, marketing, and social media.” He’s made a post today asking whether it’d be amazing to be able to custom-order a smartphone the way Porsche allows with their “Exclusive” series.

Of course as this suggestion was posted to Kawasaki’s own “Mobile Devices” Google+ community, it could simply be that the man is just asking interesting questions about the future in smartphones in general. If on the other hand he’s a social media specialist and doesn’t know that creating a post such as this with his current title would create a bit of heat for Motorola in the near future, then he’s no social media specialist at all.

So what’ve we got? The still very, very hypothetical Motorola X Phone, a mystical unicorn of a device that’s supposedly going to be Motorola’s first Google Nexus smartphone. This device will, it’s said, work with the following: 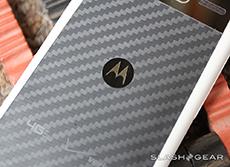 And that’s it. Really, there’s no confirmation on what this device will be, and we’re truly going on threads that lead to nowhere at the moment. But with Kawasaki’s suggestive post, we can add the following to the list:

At the moment you’re already able to get many smartphones in several different colors – the Samsung Galaxy S III comes in blue, black, white, red, brown, and sometimes pink! You’ve also got a choice of what size internal storage you’ll be working with for most of the major smartphone releases. So what’s left? Maybe some Apple-esque back-facing casing etching – fun!