Motorola is making its return to the flagship smartphone space, and the Motorola Edge+ pulls no punches. Headed to Verizon as an exclusive in mid-May, the new handset promises 5G, a big battery, near-pure Android 10, and a hefty 108-megapixel camera, all wrapped up with a sleek Edge Display screen. Question is, even then has Motorola done enough to stand out in a segment dominated by Apple and Samsung?

The Edge+ is certainly a handsome phone, though from the front all you really see is screen. Motorola is calling its 6.7-inch curved OLED “Endless Edge,” as it wraps 90-degrees around both sides of the smartphone. It’s FHD+ resolution and runs at 90Hz, with HDR10+ certification. 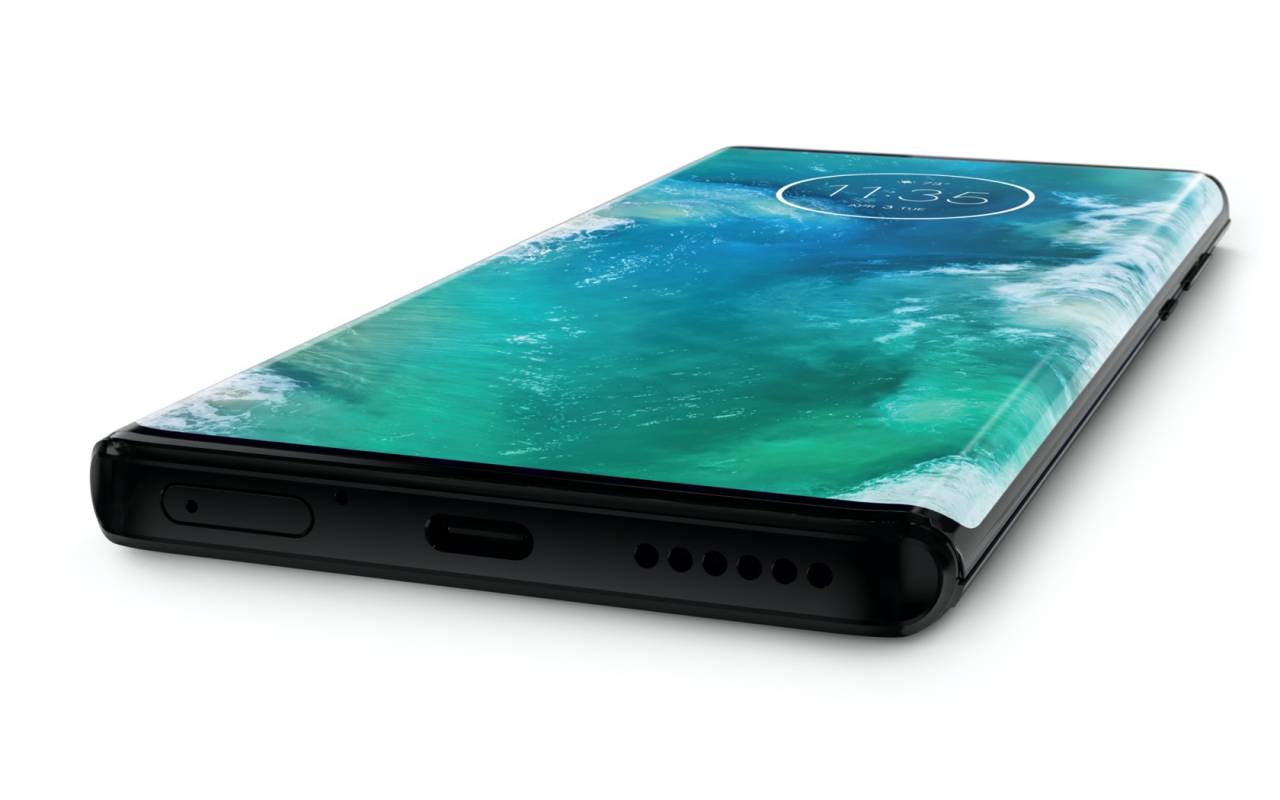 There’s also 10-bit, DCI-P3 color space support. According to Motorola, Endless Edge isn’t just there because it looks slick. The 21:9 aspect ratio, for example, makes it narrow enough for one-handed use, the company claims, and there’s grip/touch detection to avoid false triggers of the touchscreen. Motorola’s engineers did work to make sure none of the critical Android apps will have UI elements like buttons that slide off the sides, either, though you’ll be able to turn off the sides and have software just show as normal if there’s a problem. 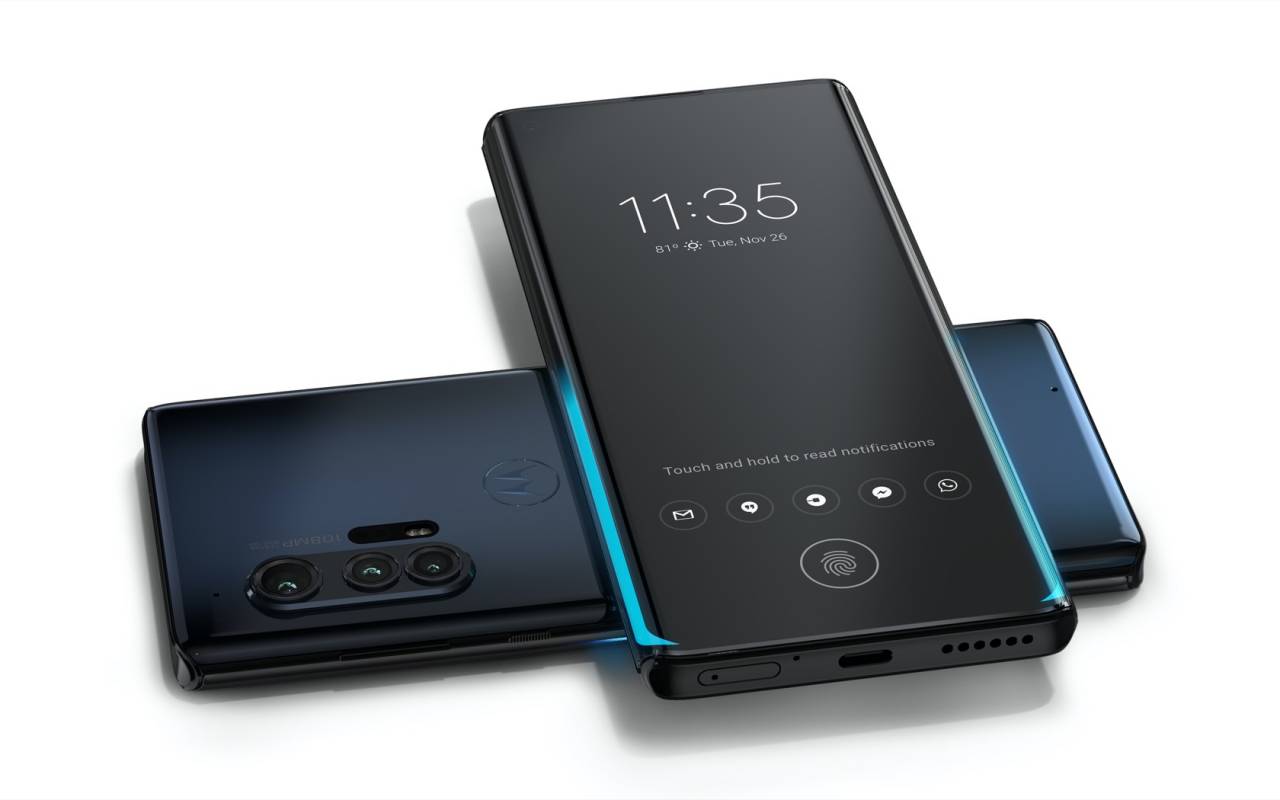 As we saw from Samsung with its curved edges a few Galaxy generations ago, the Edge+ has an Edge Display Mode which can show notifications from across the room. There’s also Edge Touch, with new ways to interact with the phone. Swiping down the edge once brings down the notification shade, for instance, while twice pulls open the settings. You can swipe in for app shortcuts, favorite contacts, or tools like the flashlight. Turn the Edge+ 90-degrees, meanwhile, and you can have virtual shoulder buttons appear.

Motorola is leaving nothing to chance when it comes to its primary camera, with the Edge+ bringing a whopping 108-megapixels to the party. The 1/1.33-inch sensor is almost three times larger than the 12-megapixel cameras the company has used on its previous flagships. 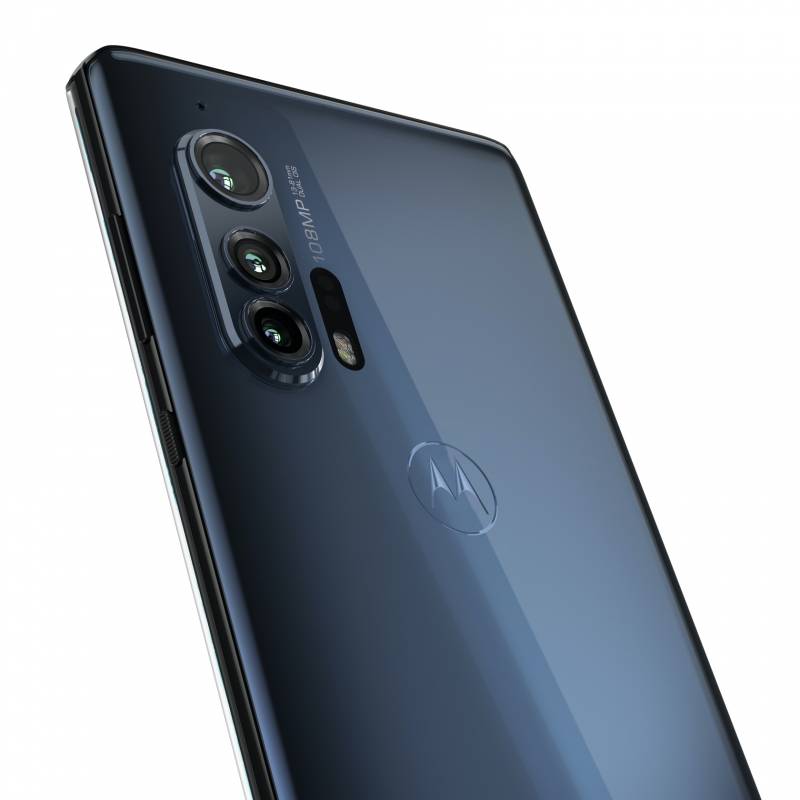 Normally, the Edge+ will produce 27-megapixel stills with the camera, using a QuadPixel approach. That combines data from four pixels into one. There’s also optical image stabilization for the f/1.8 lens, and it can shoot up to 6K 30fps video, 60fps Full HD, or 120fps FHD slow-motion.

Motorola then adds a 16-megapixel 117-degree ultra-wide (f/2.2), plus an 8-megapixel 3x telephoto (f/2.4). The latter also gets OIS, while the ultra-wide can be used for macro shots as close as 2cm. Finally, there’s a time of flight sensor, which Motorola is using for faster autofocus. You can see sample photos Motorola captured in the gallery at the end of the article. 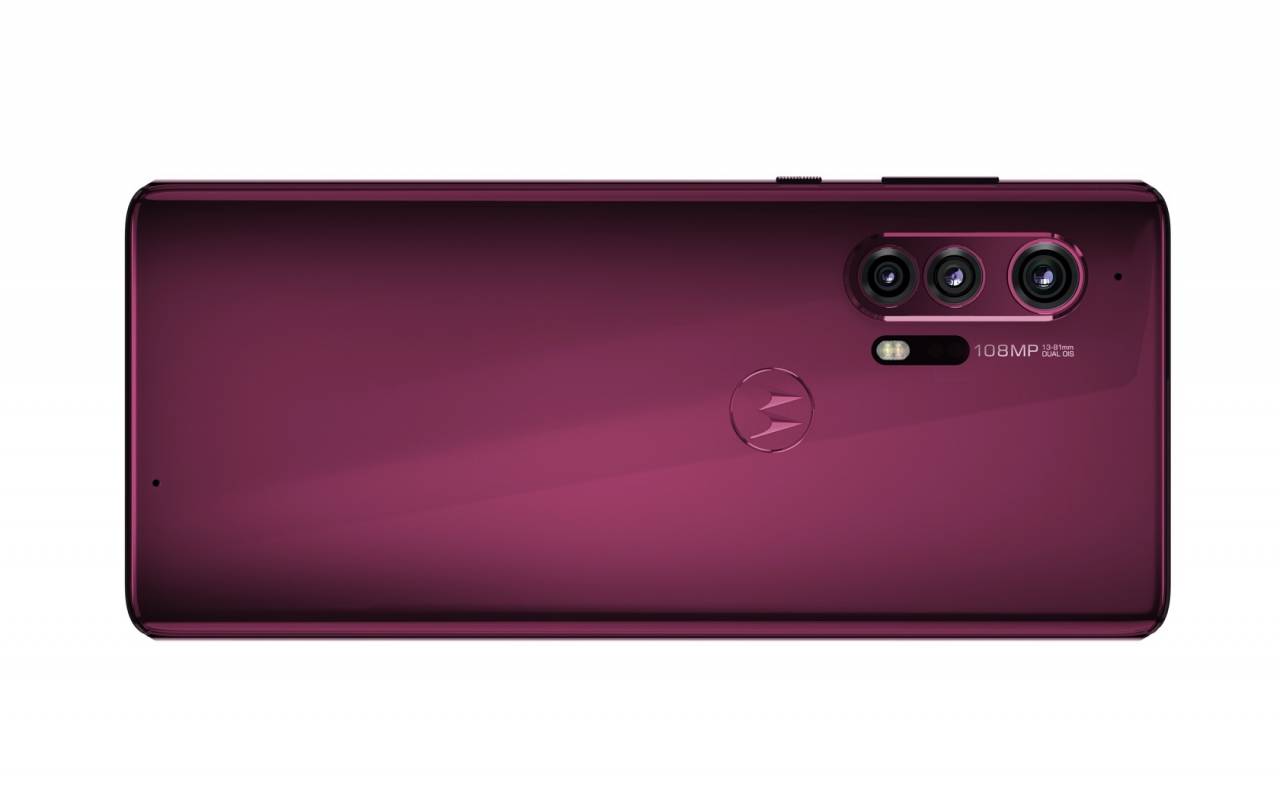 As you’d expect there are various software features too. Portrait mode is available in photos and video, with HDR bokeh in stills. There’s night vision support for both the main and 25-megapixel selfie camera. For video, Motorola is doing things like real-time horizon correction (+/- 5 degrees) and the ability to grab a 20-megapixel still while you’re simultaneously recording footage.

Audio worth listening to

Smartphone sound quality often seems like an afterthought on most handsets – no, LG, we haven’t forgotten you – but Motorola wants to make it a key part of the Edge+ story. While there’s still a 3.5mm headphone jack, however, Motorola’s research suggests that people use their phone’s speakers more than they do headphones. So, that’s where the Edge+ has focused. 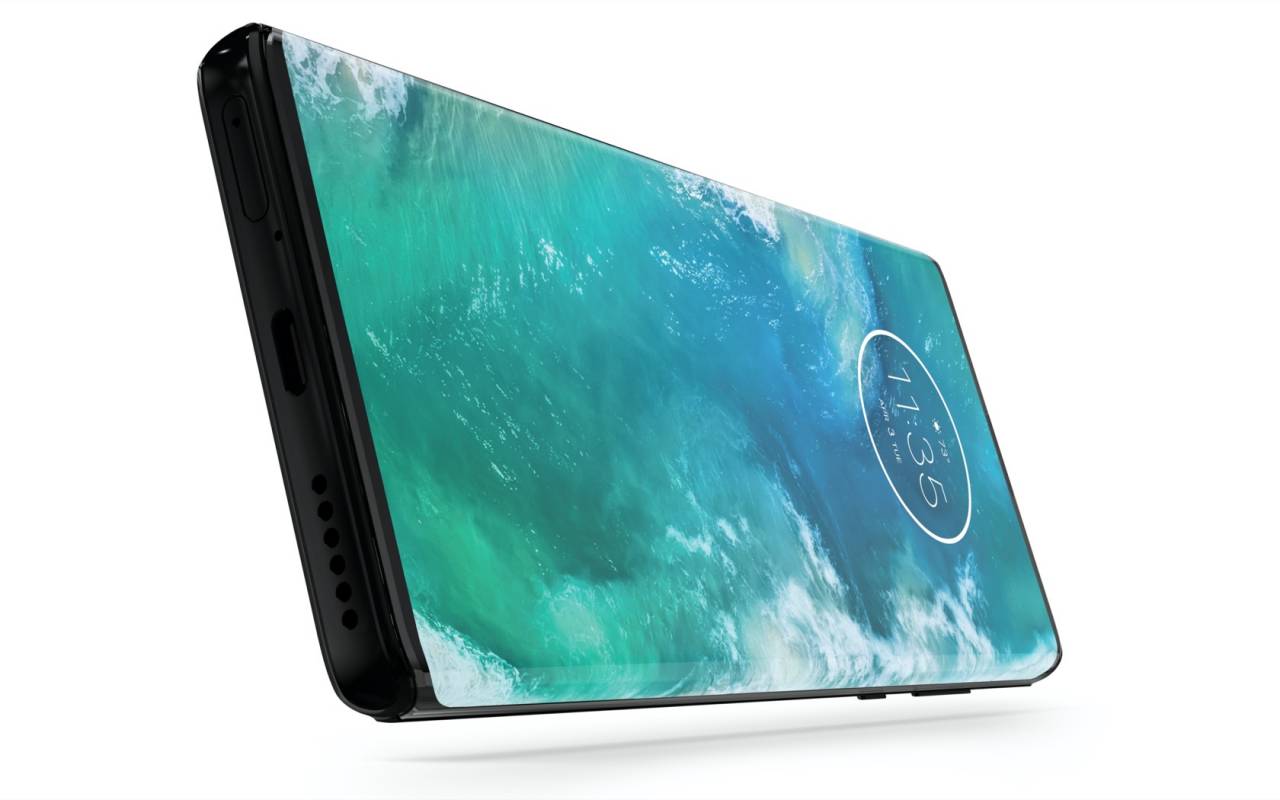 There are stereo speakers that, Motorola claims, deliver the highest output of any smartphone. They’re over 60-percent louder than on Motorola’s 2019 phones, the company says, and have been tuned by Waves for clarity, crispness, and general dynamism.

Three microphones have been used, too, and of course there’s Bluetooth 5.1 (along with WiFi 6) if you’re aboard the wireless headphones train.

Inside, a 5G powerhouse 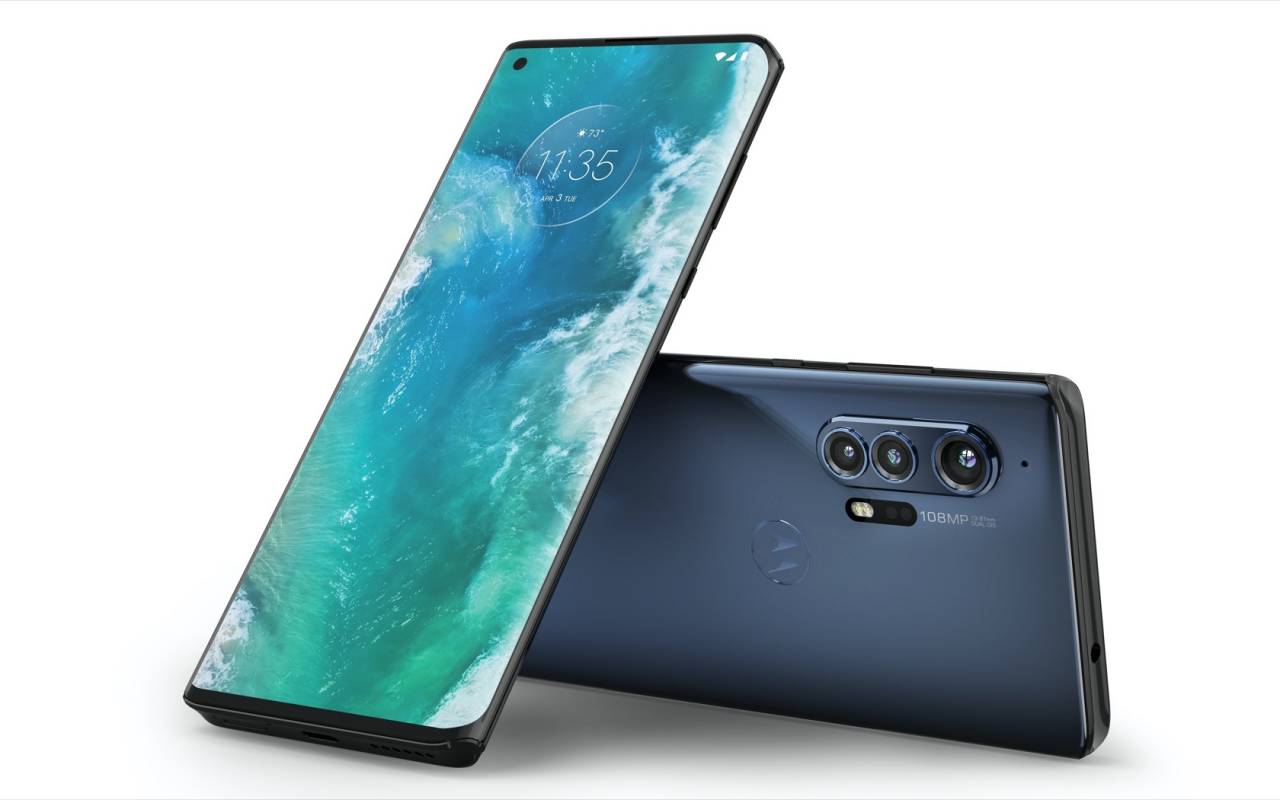 As you’d expect, there’s also 5G. Motorola is supporting both Sub-6 and mmWave, which makes sense given the Edge+ will be a Verizon exclusive in the US. The phone-maker’s early testing has seen over 4Gbps downloads on the carrier’s 5G network.

For software, there’s what Motorola claims is near-stock Android 10. There, rather than trying to reinvent the wheel and redo what Google does, the focus has been on making actually useful changes. Features from previous Moto phones, like the wrist-twist camera launch gesture, and the chop-chop motion to turn on the flashlight, are present and correct. 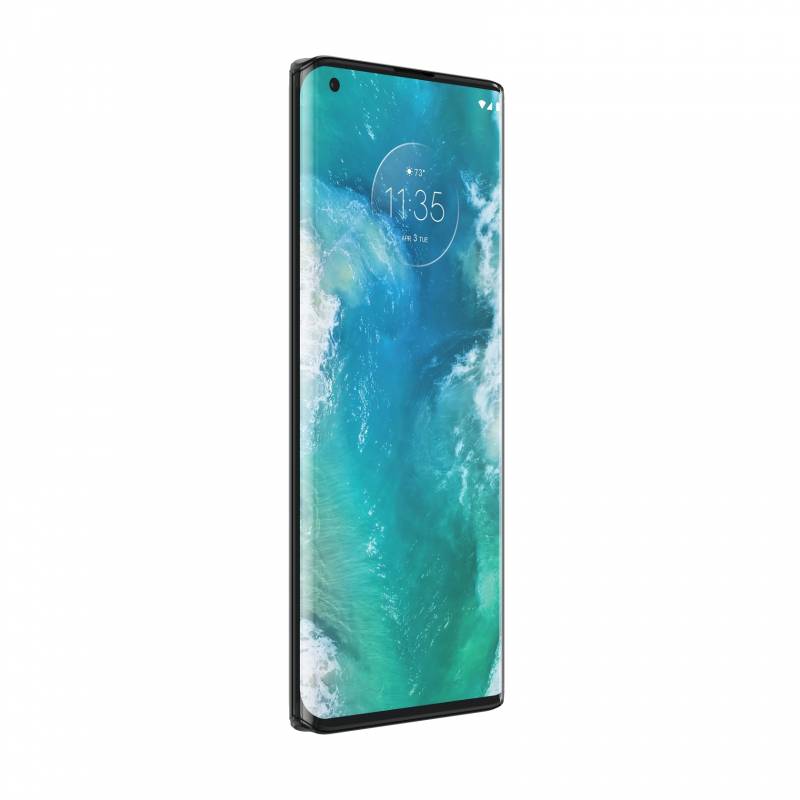 They’re controlled, as are Edge Display settings, from a new My UX Moto app, along with the audio settings and device themes (which can include custom colors, fonts, icon shapes, and even animations for the in-display fingerprint sensor). One potentially very useful setting will be Moto Game Time, which can automatically block interruptions like notifications while you’re playing a game.

Motorola is aiming to get Edge+ owners to Android 11 “as quickly as possible,” and committing to quarterly security updates for at least two years. 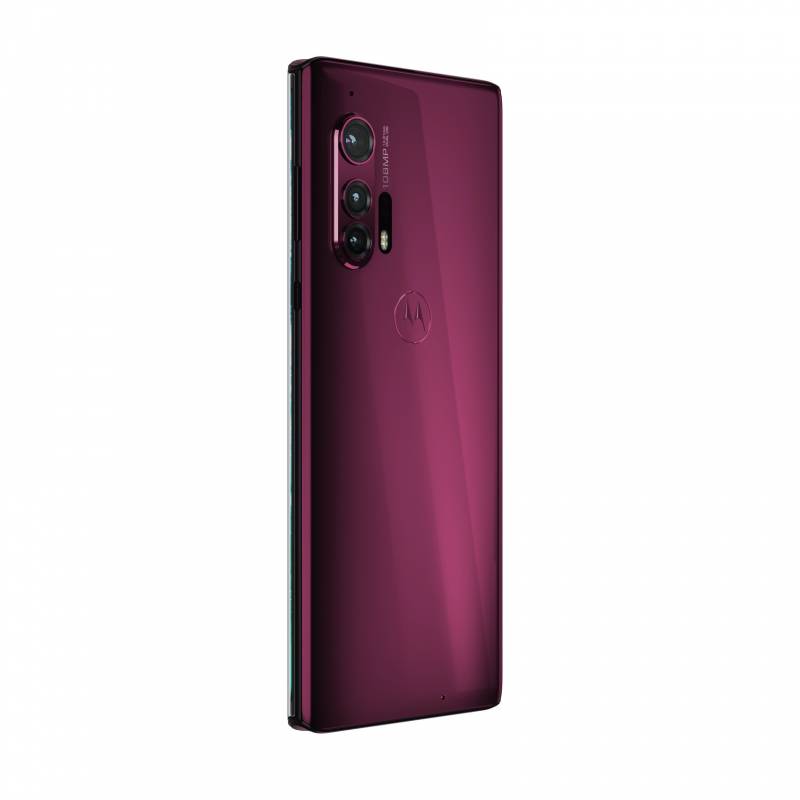 As for battery life, the boast is two days of power from the Edge+’s 5,000 mAh battery. That, Motorola points out, is the largest capacity battery on any 5G phone on the market today. It’ll recharge via up to 18W TurboPower wired charging, or 15W TurboPower Wireless. Put another Qi-compatible device on the back, meanwhile, and there’s 5W wireless power sharing from the phone.

Given the specifications, you’d be forgiven for expecting a Galaxy S20 Ultra 5G-like four figure price tag. Motorola has just avoided that – and we do mean just with the Edge+ coming in at $999.99. 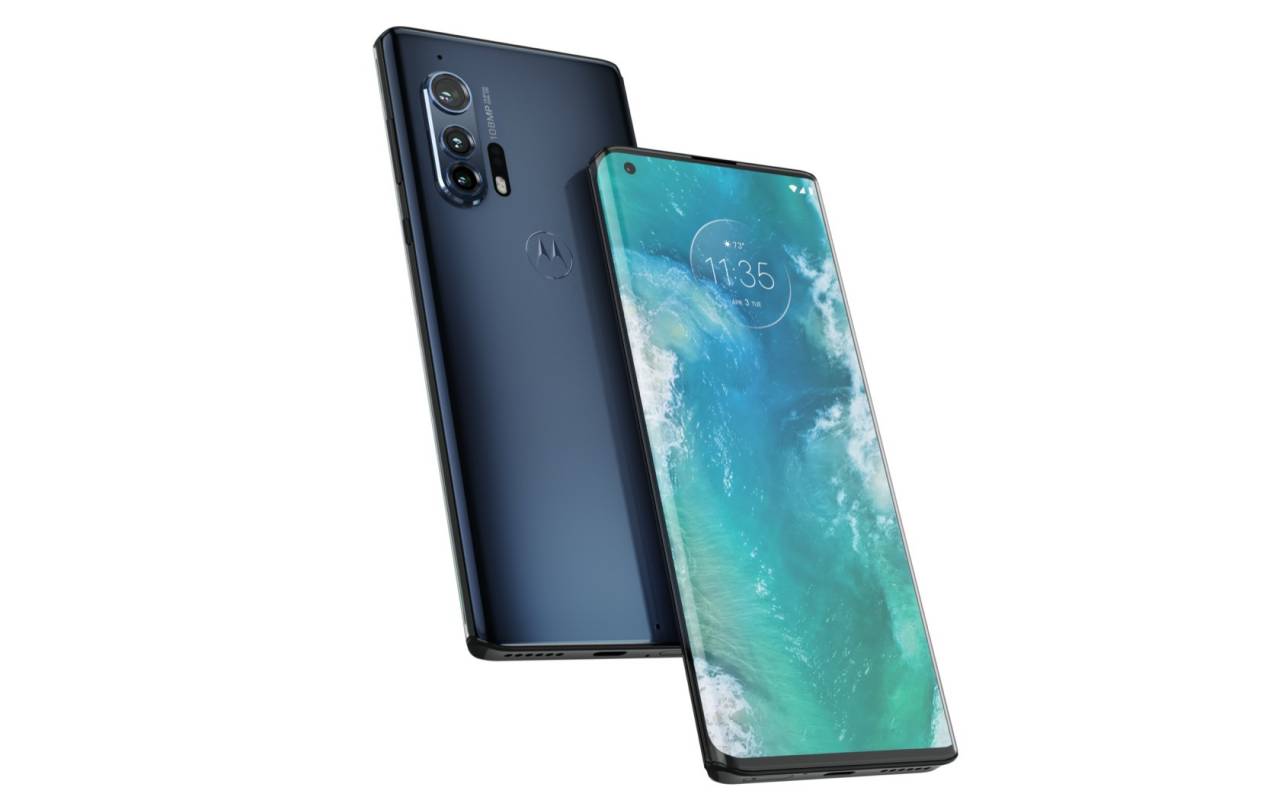 In the US it’ll be a Verizon exclusive, with sales kicking off from May 14. There’ll be no unlocked sales, Motorola says, though Verizon will have a payment plan option at $41.66/mo for 24 months. Sign up to a new Unlimited plan, plus trade in your old phone, and Verizon will knock up to $550 off the price. In Canada, meanwhile, it’ll be more broadly ranged across Bell, Rogers, TELUS. and Freedom Mobile.

Described as “water repellent,” the Edge+ will be offered in two finishes: Smoky Sangria and Thunder Grey.

The Motorola Edge is a budget option

If $999.99 is too rich for you, Motorola will have another, more affordable option. The Motorola Edge keeps the 6.7-inch display of its Edge+ sibling, complete with curving sides, 90Hz refresh rate, and HDR10 (though not HDR10+), but pairs it with Qualcomm’s Snapdragon 765 chipset instead. That comes with 4GB of RAM and 128GB of storage. 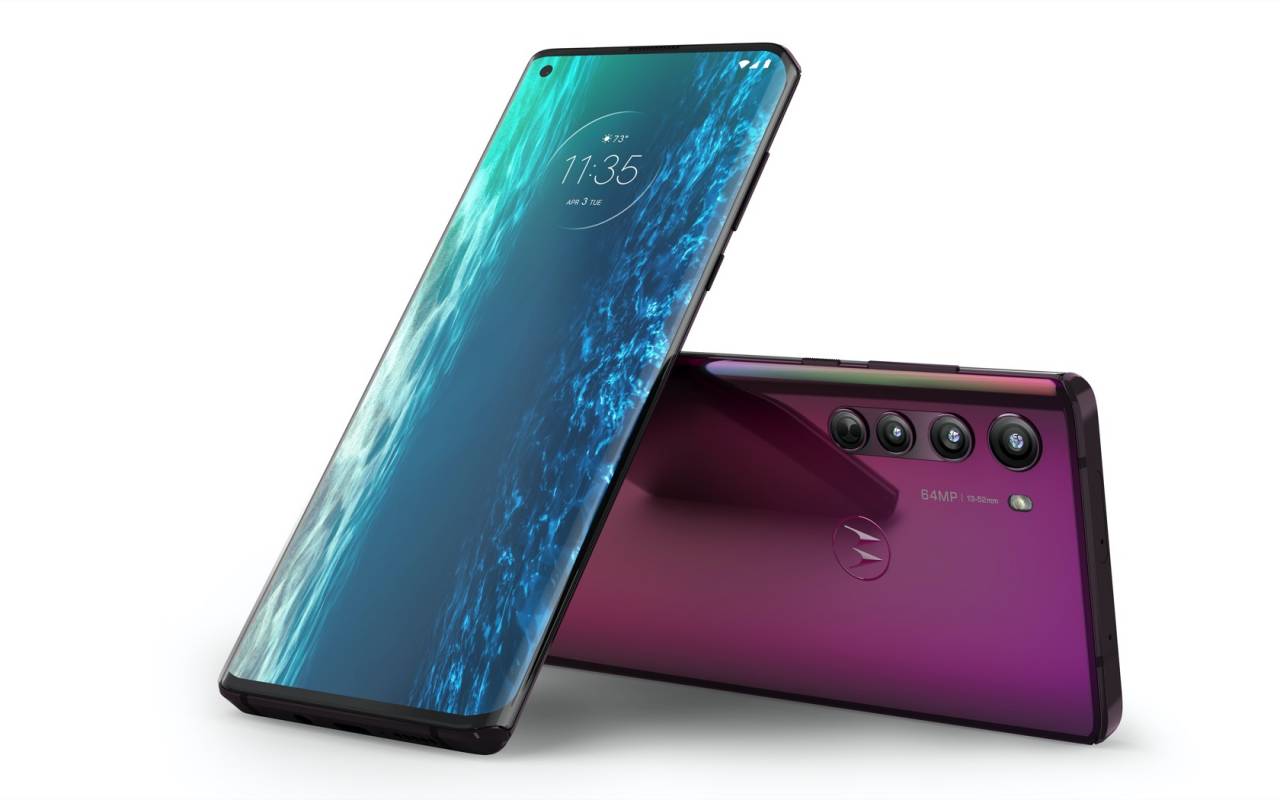 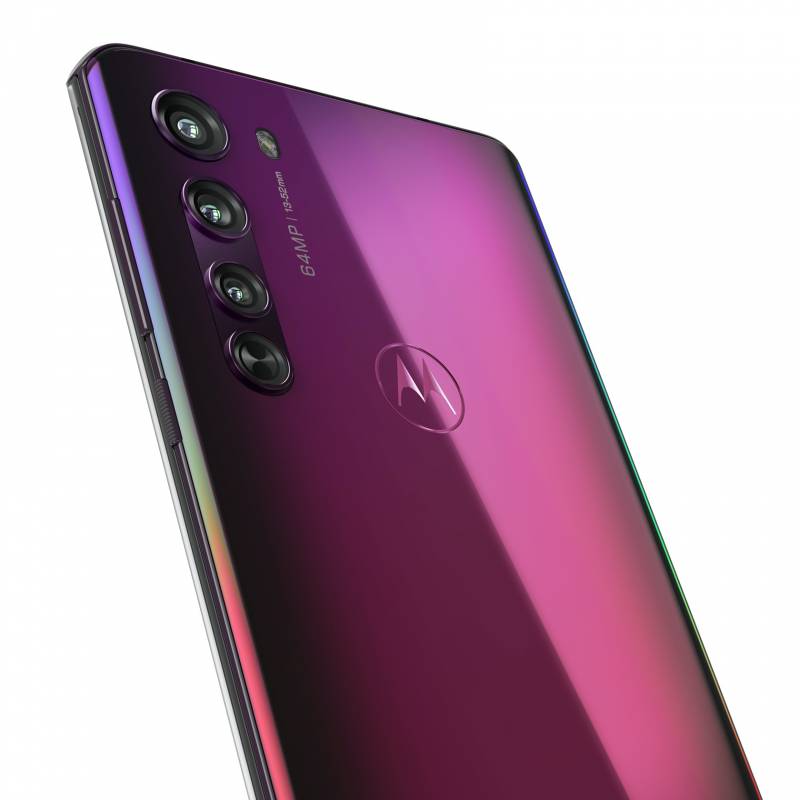 The Edge will record up to 30fps UHD or 60/30fps Full HD video with either the main or ultra-wide cameras, or up to 30fps Full HD with the telephoto camera. The 4,500 mAh battery charges – including offering 18W TurboPower – via USB-C, but there’s no wireless charging. 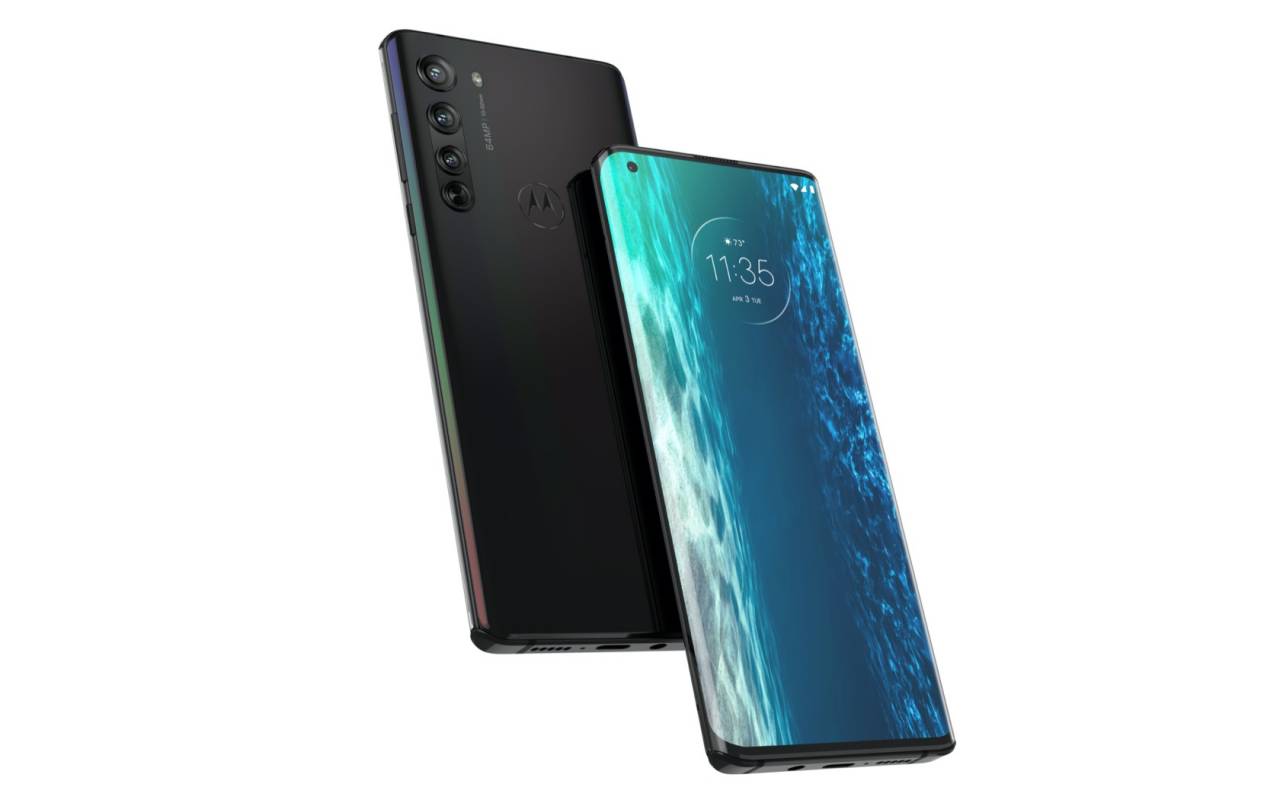 You still get a microSD card slot and a 3.5mm headphone jack, and there are dual stereo speakers tuned by Waves. The Edge is IP54 water-repellant, and it’ll be offered in Solar Black and Midnight Magenta. Motorola says that pricing and availability details will come closer to its launch over the Summer.