The first thing that struck me about the Moto 360 Sport is how together it felt. While the first Moto 360 seemed the epitome of style at the time back when it was launched in late 2014, it was also rolling with a replaceable watch strap system that was ever-so-slightly more difficult to work with than its competition. Here in 2015 you have the choice of a replaceable strap with the Moto 360 (2015 edition) with a more traditional set of watch strap arms or using the Sport, a watch with one strap that’s attached directly to the bulk of the watch.

What strikes me after 24 hours of use with this watch is the fact that it’s so comfortable to wear. Not that the Moto 360 (2015) isn’t comfortable, especially if you’re using a fine strap, but here the watch and the strap it comes with (built in) feels precise and well thought out for a person like myself.

I am not an especially active person. I spend most of my time during the day with a laptop computer, and my wrists are often resting against the surface of this laptop.

As such, metal straps don’t work – they scratch the surface of my computer and push into my arm in an uncomfortable way. Thick straps are similar – as are straps with metal latches.

The strap on this watch is silicone, and has a fairly soft plastic buckle holding it together in one of 12 adjustment holes. These holes continue up the 12-o’clock strap, making the watch lovely to look at from either side of your wrist. 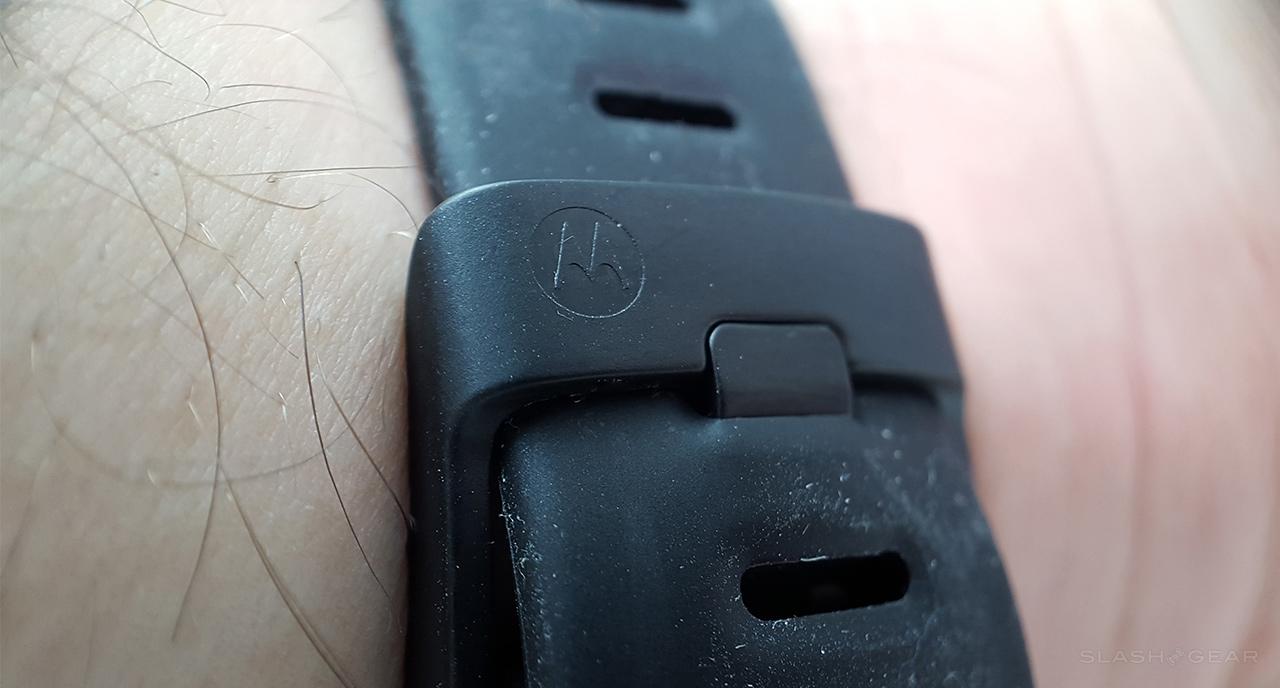 Again, yes, this strap is a bit of a dust magnet – though you wont end up noticing much unless you get real up close and personal.

I can rest my wrist on my laptop while I type for hours on end and my wrist does not cry out in agony. The silicone is forgiving, unlike most other straps on watches I’ve tried. 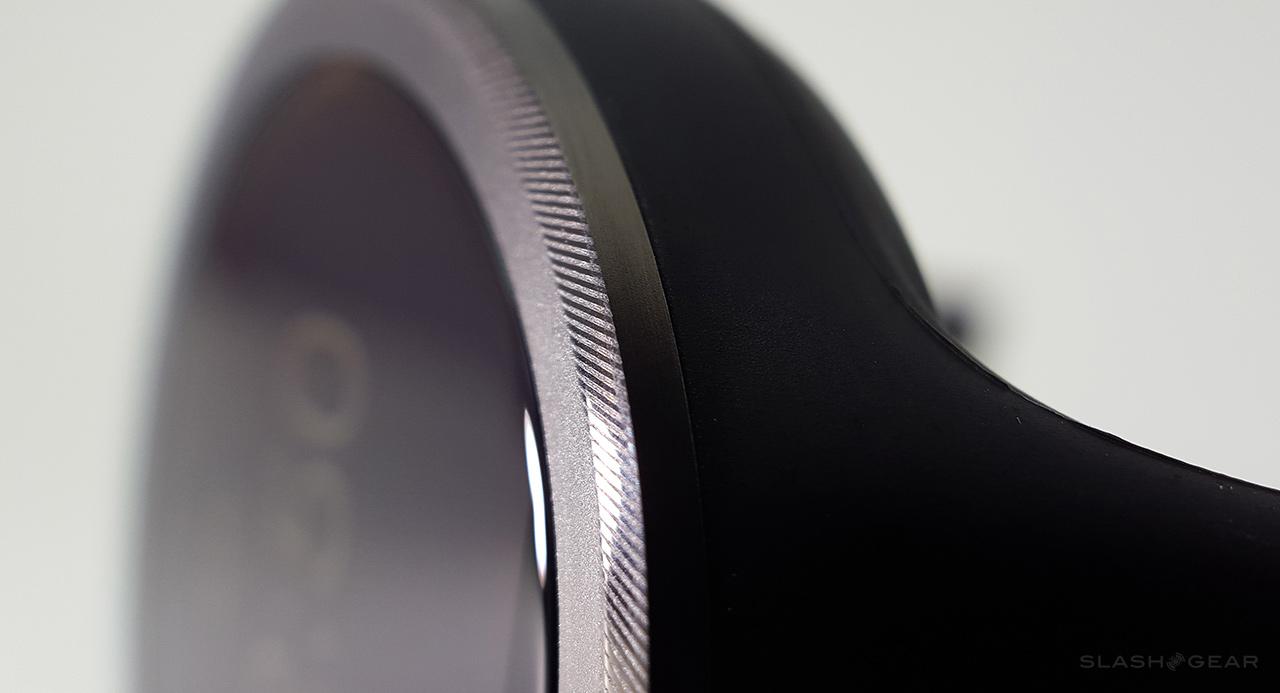 Above: the super tiny texture of the blade-like lines cut around the bezel of the watch face. These grooves are so slight that, though you’re able to feel them with your fingertip, light reflects from the surface in a way similar to if it were flat and polished.

Outdoors and on-the-go, the watch is – obviously – just as comfortable. The band and the watch sit on my wrist lightly, and I often forget that I’m wearing any sort of wrist gear at all. 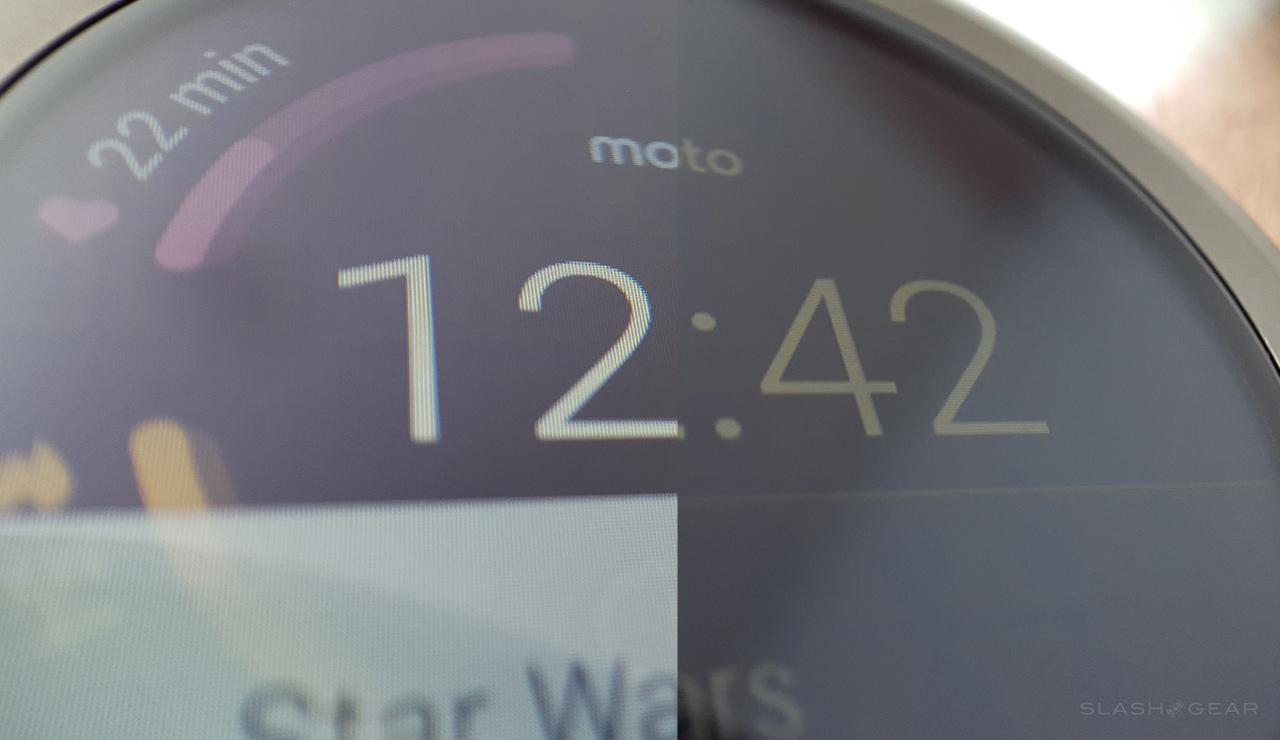 In our experience over the past 24 hours, the reflective nature of the technology here in the display means that means we’re getting visibility that borders on the qualities of e-ink. That’s very, very good. While it does get difficult when we near a 45-degree angle with this tech, backlit LCD activation brings visibility back up to top-class.

Stick around as our review series heads into software and usability in the near future. Follow SlashGear’s Moto 360 tag portal for more.