Native Union won’t give up on the idea of traditional handsets for modern smartphones, and their new Moshi Moshi MM03i even gives you somewhere to dock your iPhone. The new model has a MultiPoint Bluetooth-enabled handset and a special charge/sync cradle with a charging bay and an iPhone dock.

Thanks to the MultiPoint support, you can pair the MM03i handset with not only the iPhone but another Bluetooth-enabled device – such as your laptop – simultaneously, using it for regular and Skype calls, for instance. The base also has a 3.5mm audio output, for plugging in a speaker system.

The handset itself promises 6hrs of talktime or 120hrs of standby, and while there are dedicated call answer/end and volume buttons, it’ll also automatically answer an incoming call if you pick it up off the dock. It’ll go on sale for the not-inconsiderable price of £115 ($181) in December. 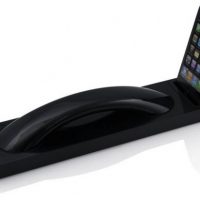 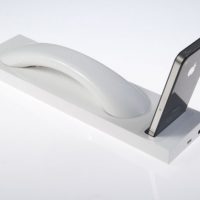 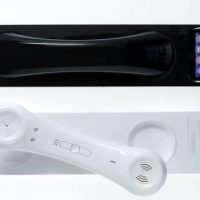 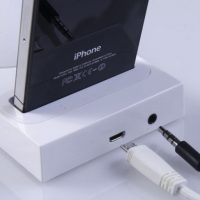 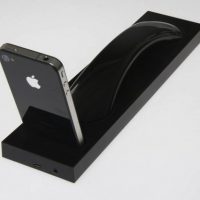 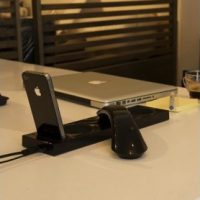 London, UK, 25th November 2010 — Native Union, creator of the Moshi Moshi range of mobile phone enhancing handsets, has today launched the second iteration of the MM03, a Bluetooth enabled handset now with an integrated charging and sync cradle dedicated to the iPhone – MM03i. Designed by award-winning designer David Turpin the MM03i is a slimline, stylish, sophisticated handset, which has been specifically manufactured with the iPhone user in mind.

Available as a set, including handset and weighted base unit with iPhone charge and synch functionality, the MM03i is finished either in white gloss or black high gloss to match the iPhone. Fitted with the advanced Bluetooth 2.1 chipset, this handset has a dual pairing function that will automatically pair with both the computer and the mobile phone. Skype calls and mobile calls are possible with the same handset. The 2.1 Bluetooth wireless chip also makes pairing very easy when the devices are in range of the MM03i so no fiddly pairing procedure is required.

In addition to practical benefits, the MM03i also delivers a compelling health benefit to consumers when used as a telephone handset by dramatically reducing exposure to the radiation emitted by mobile devices, which is linked to an increased risk of cancer. Medical research indicates that heavy, direct-to-ear mobile phone usage can potentially cause health damage and Native Union has addressed these concerns, by reducing mobile phone radiation from mobile phones through the use of its speakers and handsets. Independent testing by TUV, the world’s leading certification company, found that the Moshi Moshi 03 reduces radiation by 97 percent.

The MM03i boasts the following features:
· Using a MM03i reduces up to 97% of the radiation absorbed compared to direct use of your mobile phone
· Bluetooth V2.1 + EDR
· Bluetooth Multi-point – allowing simultaneous Bluetooth connections to two devices (i.e. mobile phone and wireless computer)
· Expands the talking areas at home by allowing you to place your mobile phone at the location where you have the strongest signal while using the MM03i as a handset mobile
· Talk-time 6h/ Standby time 120h
· Call answering by direct pick-up of handset from base
· Pick-up/hang-up buttons and volume buttons
· Dedicated iPhone charge and synch cradle with 3.5mm audio out to plug a speaker system
· Noise reduction system
· Can be paired with a Bluetooth wireless computer
· Connection status visual indicator
· Patented design

Compatibility
MM03i is compatible with all iPhones including 4. MM03i can also pair with most other mobile phones and PCs with Bluetooth compatability.