The Moon is not only still active tectonically, but shrinking, NASA says, generating “moonquakes” as it slowly contracts. The new findings combined data from multiple Moon missions that took place nearly five decades ago with the LRO Mission, the Lunar Reconnaissance Orbiter which is currently mapping out the surface of Earth’s satellite.

Four seismometers had been placed on the Moon by the Apollo 11, 12, 14, 15, and 16 missions, the instruments collectively running between 1969 and 1977. Although data was collected for less than a decade, it was enough to record what NASA describes as 28 “shallow moonquakes” over the period. Those quakes spanned from around 2 to 5 on the Richter scale.

Although we’re familiar with active tectonics causing new land to be formed on Earth, such as the Krakatoa Archipelago, in the case of the Moon it’s a contraction, not an expansion that’s at play. As its interior continues to cook, the Moon has shrunk more than 150 feet in diameter over the past several hundred million years, NASA says. That has a noticeable impact on its surface.

The brittle crust of the Moon contracts and breaks, forming what are known as “thrust faults” across the surface. Resembling small, stair-step shaped cliffs, they’re portions of the rock where overlaps have been created. Typically, NASA says, they’re tens of yards in hight, but can stretch across multiple miles.

While the seismometer data has been held for decades, combining it with the LRO Mission mapping is new. Thomas Watters, senior scientist in the Center for Earth and Planetary Studies at the Smithsonian’s National Air and Space Museum in Washington, led a study which collated the Apollo findings with a new algorithm to better pinpoint the epicenter of each moonquake. It then compared that data with high-resolution images of the Moon from the orbiting spacecraft.

“We think it’s very likely that these eight quakes were produced by faults slipping as stress built up when the lunar crust was compressed by global contraction and tidal forces,” Watters says, “indicating that the Apollo seismometers recorded the shrinking Moon and the Moon is still tectonically active.” The team was able to isolate the specific seismic signatures of moonquakes from other quake-provoking incidents, like the impact of meteoroids. 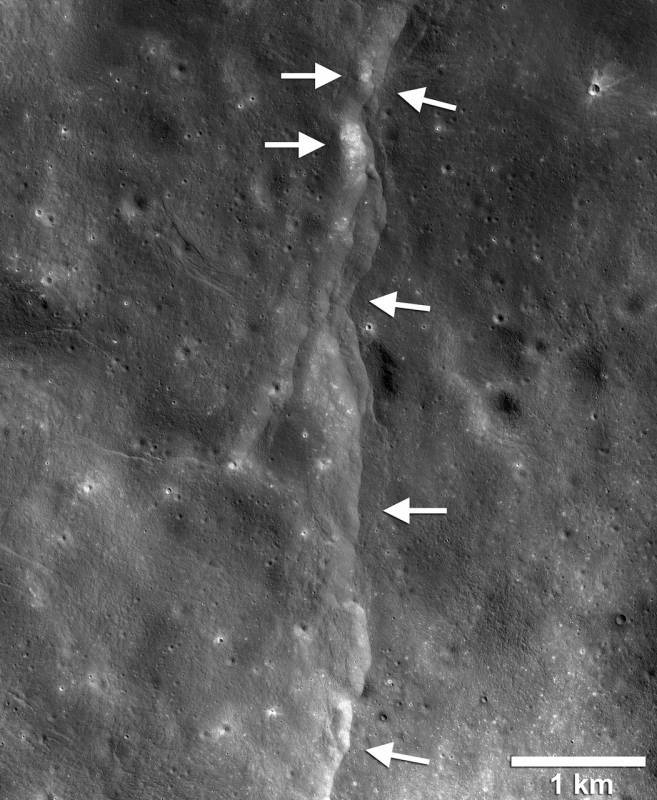 The LRO photos added to that confidence. Using images of more than 3,500 of those stair-shaped cliffs, known as fault scarps, researchers were able to identify landslides or boulders nearby. Different levels of darkening – caused by solar and space radiation weathering – helped confirm the relative age of each section.

“Other LROC fault images show tracks from boulder falls, which would be expected if the fault slipped and the resulting quake sent boulders rolling down the cliff slope,” NASA suggests. “These tracks are evidence of a recent quake because they should be erased relatively quickly, in geologic time scales, by the constant rain of micrometeoroid impacts on the Moon. Boulder tracks near faults in Schrödinger basin have been attributed to recent boulder falls induced by seismic shaking.”

The hope now is that new seismic measurements can be taken, to build on the understanding of what’s going on under the surface of the Moon. A new manned mission is expected to take place by 2024, with sustainable missions hoped to begin from 2028. The experiences there will help shape NASA’s eventual manned missions to Mars.