Back in June last year, SlashGear was invited to spend time with animation studio DreamWorks and see the work they and HP had done on Kung Fu Panda.  At the time, it was difficult to imagine a more complex and processor-intensive setup, but DreamWorks have managed to one-up themselves in 2009 with Monsters vs. Aliens.  Set to hit theaters across America this weekend, Monsters vs. Aliens is the first full-length production from the team in 3D.  SlashGear was invited back to find out exactly what’s involved in making 50ft monsters leap out of the screen.

Video and gallery after the cut

As with Kung Fu Panda, it starts with a whole 3,500 square foot room packed full of blade servers.  HP provided over 9,000 cores spread across multiple racks of individual HP ProLiant BL460c blades, each rack demanding 18kw of power.  Over 500 artists and animators worked directly in 2D and 3D on HP xw8600 dual-Xeon quadcore workstations and with HP DreamColor monitors.  It required hundreds of blades for each individual character; B.O.B., for instance, is made up of 12,000 unique bubbles, but with this current generation hardware DreamWorks could render a frame in a few seconds, rather than several minutes with previous-gen machines.

In all, thirty sequences were created, a total of more than 120TB of data and taking over 920,970 manhours.  The standout mothership destruction scene alone amounted to 6TB for the single shot.  Each is created in multiple versions: both 2D analog and 2D digital, for the bulk of movie theaters, each of which are taken from a 3D master using the new DreamWorks InTru 3D system.  Every frame is HD resolution, and there are over 100,000 frames in the 2D versions and twice that amount in the 3D film.

As with previous 3D films, Monsters vs. Aliens requires special glasses to be viewed properly.  Where InTru 3D differs from the older systems is in its use of digital synchronization: by perfectly matching the separate left- and right-eye images (which are combined into one, 3D image by the brain) not only are ghosting, motion blur and eye-strain bypassed, but animators have far greater control over the depth of the shot.  Working with Phil Captain 3D McNally (who legally changed his name – no, really) DreamWorks’ animators use depth in front of, and behind, the screen to draw the viewer’s interest. 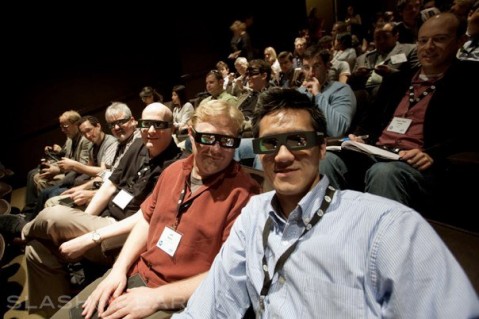 Along the way, they tested out just about every 3D display, auto-stereo screen and headset on the market, developing their own proprietary system of full-pipeline 3D authoring, not just of individual scenes but of scene-to-scene depth continuity.  Most of the available systems are either too expensive, too bulky or two individual-user focused (or a combination of all three) to scale up to theater-size glasses-free viewing.  DreamWorks revealed, however, that they are currently in talks with eyeglasses and sunglasses manufacturers regarding building the polarization technology required to view InTru 3D into standard lenses.

As for Monsters vs. Aliens as a film, it’s another great DreamWorks family film with enough action and comedy for the kids together with in-jokes for the adults.  We’d say it’s definitely worth finding your nearest 3D-capable theater to enjoy it, though; now that we’ve watched DreamWorks animation in 3D, there’s no way we’d want to go back to 2D! 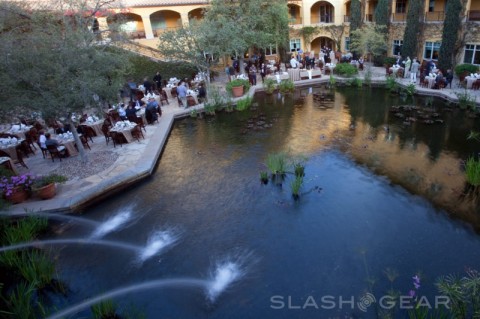 We’d like to thank DreamWorks and HP for their hospitality and for sponsoring the InTru 3D event.