Just under one year ago, the story of a $1 million dollar Tyrannosaurus Rex made its way across newslines due to its rarity and the fact that it’d been stolen from Mongolia. Fast forward to now and this Tarbosaurus Bataar thunder lizard is finally headed back to its home, the until-recently holder of this collection of fossils headed to court with a collection of charges against him. Eric Prokopi is not having a good day today.

This looted beast was spoken about by professionals and the scientific public alike, petitions having been signed and professors making the case for the impossibility of legality in the auction that was to take place in the Spring of 2012. Back then it was Dr Mark A Norell, Chairman and Curator, Division of Paleontology at the American Museum of National History who made one of several compelling cases for this construction of bones to have been looted illegally. 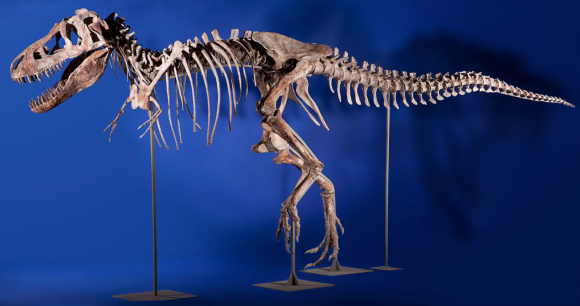 “In the current catalogue Lot 49317 (a skull of Saichania) and Lot 49315 (a mounted Tarbosaurus skeleton) clearly were excavated in Mongolia as this is the only locality in the world where these dinosaurs are known. The copy listed in the catalogue, while not mentioning Mongolia specifically (the locality is listed as Central Asia) repeatedly makes reference to the Gobi Desert and to the fact that other specimens of dinosaurs were collected in Mongolia.

As someone who is intimately familiar with these faunas, these specimens were undoubtedly looted from Mongolia. There is no legal mechanism (nor has there been for over 50 years) to remove vertebrate fossil material from Mongolia.” – Dr Mark A Norell for American Museum of National History

The “unusually complete” skeleton is set to be returned to Mongolian representatives today by Homeland Security officials in a ceremony near the United Nations. Prokopi meanwhile is currently free on bail and faces up to 17 years in prison. According to the NY Times, Prokopi agreed to a guilty plea with the court on December 27th of 2012 along with a forfeiture of several other skeletons that he’d apparently come into possession of illegally as well.