So you’re starving for more Mandalorian TV show, but Disney’s not yet delivered the trailer or the premiere of the next season? The folks at Mondo have a physical music disc product at which you might want to take a gander. Mondo is a company that creates limited edition collectible products of several sorts. In this case, they’ve created an 8XLP set, eight individually-pressed vinyl records with the music from the streaming TV show The Mandalorian, season one.

To be extra clear, here, these are not Blu-ray discs, they are not DVDs, they are vinyl records. Each contains the music of the show The Mandalorian. The “premiere physical release of Ludwig Göransson’s complete Season One soundtrack” for The Mandalorian is included in one box set. 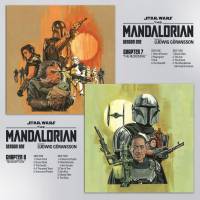 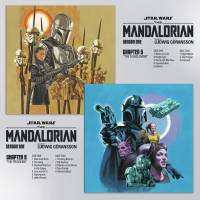 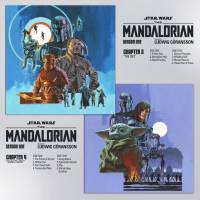 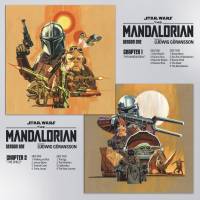 As Mondo suggests, this is a one-time pressing of the set. That doesn’t mean there’ll never be another physical-form iteration of the soundtrack, ever, it just means that this specific set, with this artwork, sold by Mondo, will only be released in one limited edition.

Each record is pressed into 180 Gram vinyl, and each in a slip cover with its own specific episode-based artwork. All the artwork you see on the covers of each record was created by artist Paul Mann. All 8 discs are housed in a “heavy duty slipcase” which, in turn, is adorned with The Mandalorian’s own mudhorn Signet.

This set, called “The Mandalorian – Season One – Original Soundtrack 8XLP Box Set” from Mondo is on pre-order right now. You can pre-order this set for a cool $200 USD, if you do so wish to find it at Mondo. You’ll be able to buy one limited edition set per person, per household, and the expected shipping range is inside the month of November, 2020.

If you’d like to find The Mandalorian Season 1 on Blu-ray or DVD, you’ve been able to do so since November of 2019. You can also buy the Star Wars: The Mandalorian (Original Soundtrack) in a sort of… compact way with far, far fewer music tracks on a “The Child” picture disc (also vinyl), straight from Walt Disney Records – that’ll be released tomorrow (the 28th of August, 2020.)