Mobinnova have announced one of the first NVIDIA Tegra-based smartbook/netbook/shrunken-laptops at Computex, the élan.  With an 8.9-inch display capable of playing back 720p video, the élan weighs just 1.84lbs and measures a mere 0.8-inches thick, but still manages to pack in 3G and WiFi, 5-10 hours of continuous HD video playback or up to 24 days of audio playback (assuming the screen is turned off).

There’s obviously Tegra’s clever hardware Flash acceleration, which means full web access and speedy HD videos from YouTube and Hulu, together with a 3D GUI and webcam.  Somehow, Mobinnova have managed to make all this fanless.

In addition to the élan there’s another Mobinnova Tegra device, the T8, which throws in a 10.1-inch touchscreen and GPS, plus HDMI and VGA outputs.  According to the company these are just the first two of several Tegra-based netbooks set for launch; no word on pricing or availability yet, though. 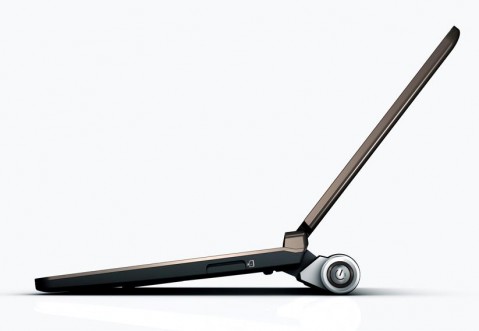 A NEW ERA IN MOBILE COMPUTING

June 2009, Taipei, Taiwan-A mobile computing revolution arrives June 2, at the Computex 2009 show in Taipei, where content providers, carriers and consumers get their first look at what may be a whole new category of high performance communication devices. The élan is first in Mobinnova’s line of ultra-portable computing devices powered by the NVIDIA® Tegra™ Computer-on-a-Chip. The 2 lb. élan is like a netbook in that it’s small, has a keyboard, and offers easy access to the Internet. However that’s where the similarities end. The élan powers up instantly, connects directly to a 3G wireless network, offers hours of continuous use, full page web browsing, and delivers graphics performance never seen before on a mobile computing device–all packaged in Mobinnova’s stylishly thin design. “This truly portable device is a pleasure to hold and to use. It offers 720p high-definition video playback, full Internet browsing and an impressive battery life,” says KC Kuo, Chairman and CEO of Mobinnova. “We like to say it ‘runs on fun’. It’s a real game changer.”

The size of a hardback book and weighing less than 2 lbs., the Mobinnova élan is compact, quiet and cool. “It’s the most powerful mobile Internet device you can easily pack in your purse, backpack or briefcase. You can use the élan for hours, even days between charges,” says Mike Holland, Vice President of Business Development for Mobinnova. You can also use it anywhere–on a plane to Nepal, at a café in Paris, on the sidelines of a soccer game, in a college dorm room, or sitting in bed. “The élan’s advanced power management means hours of viewing pictures, HD videos, Internet browsing, and reading and responding to email,” says Holland. The Mobinnova élan offers:

Mobinnova’s élan is the first in a family of mobile devices based on the Tegra platform from NVIDIA, the inventor of the GPU. Also being shown at Computex is the Mobinnova T8, which combines the same powerful platform with a 10.1″ touch screen, GPS, and HDMI and VGA video output. “Mobinnova has designed several interesting Tegra-based, mobile Internet devices that will surprise the market with their sleek, lightweight design and long battery life,” said Mike Rayfield, General Manager Tegra Business at NVIDIA. “Tegra adds the secret sauce to deliver a desktop-like Internet experience and cell phone-like battery life in these new designs.” “The Mobinnova élan and T8 answer the portable communications challenge,” says Mobinnova’s Chairman and CEO, KC Kuo. “We are honored to partner with NVIDIA to create products that make people’s lives easier, more productive, and more enjoyable.”