In a revelation that surprised no one, Minecraft lead developer Jens Bergensten has said that a port of the mobile edition of the popular game is already working on Windows Phone with a launch coming at an undisclosed date in the future. This could very well be the first fruits of Microsoft‘s acquisition of game dev studio Mojang, which handles Minecraft’s development among other things. Whether it is just the least that fans of the game and the studio should be worried about remains to be seen.

Microsoft’s acquisition of Mojang wasn’t exactly a shock given the numerous leaks that came before it, but neither was it totally expected. That Microsoft would buy a game developer isn’t news either, but its interest in Minecraft was slightly unheard of. Whatever Microsoft’s reasons and visions are for the game, the inevitable happened and Mojang and Minecraft got assimilated into Redmond.

Given Microsoft’s history, there were some worries about the company closing the door on other platforms other than its own eventually. Microsoft promised that Minecraft would remain cross-platform, though sometimes promises are broken. For now though, it seem that Microsoft is sticking to its word, at least as far as its own platforms are concerned. Minecraft has already been available on Android and iOS but Windows Phone has not been part of the party. At least until now. Now you no longer have any reason to miss out on the world-building fun just because you’re not on either one of the world’s leading mobile operating systems. 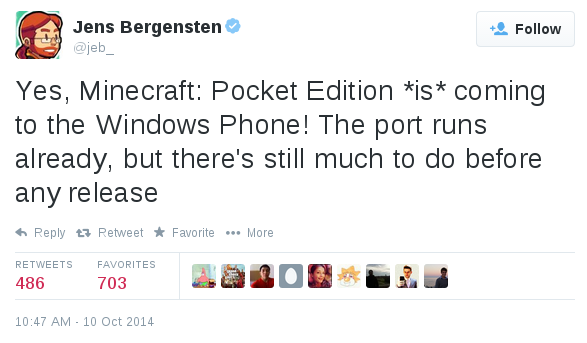 Microsoft’s interest in Minecraft might seem puzzling but consider the numbers involved. 21 million copies of the game has said to have been sold on iOS and Android, almost half of the game’s total 54 million sales. That said, those figures are probably nothing compared to the rumored $2.5 billion that Microsoft used up to acquire it. It remains to be seen how else Microsoft plans on milking this cow and what other directions it plans to take it. One can only hope that it will do good by Minecraft’s loyal followers.