So you’re the sort of person who works best if you know there’s a reward at the end of the battle – or better yet, you do best when you know you’re competing against someone else for the biggest amount of stars, goals, or flags – you’re in luck if you’re a developer working to create Microsoft-based applications! What’s going on here is that Microsoft is bringing forth a plug-in for their app-development software Visual Studio. This plug-in, aptly titled Visual Studio Achievements, has you the developer unlock badges and compete with your fellow coders on a leader board.

Your spot on the leader board is based on the code you’ve written – how sophisticated it is, and which Visual Studio capabilities you’ve used to make it so. This is an attempt by Microsoft to help you to gain some recognition for all the work you do in a way that all your friends and family members can see. Where otherwise you’ll be coding all night and into the day forever, here you’ve got a new situation:

“Developers finally have the ability to actually show their friends, colleagues, project managers, spouses and customers how good they are at what they do all day and sometimes into the night. … Built on ideas from the developers themselves, it is intended to be a humorous community-building game as well as a path to the many, and, to some, unknown features offered in Visual Studio. This is one of several initiatives Microsoft is undertaking to recognize developers for their tireless and indispensable work.” – Karsten Januszewski of Microsoft 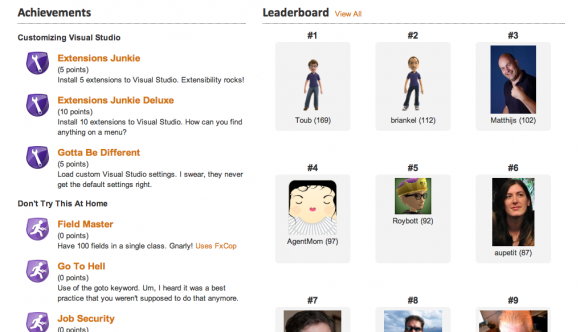 You can see the leader board begin to fill up over at MSDN’s Channel 9 where Visual Studio already has such awesome categories as Don’t Try This At Home, Good Housekeeping, and Power coder. You can also grab a widget for your webpage to show off your statistics, and you’ll be connecting and sharing on your favorite social network soon if you wish as well.