Microsoft plotting Skype Teams as a competitor to Slack

Earlier this year, we heard that Microsoft had considered putting in an $8 billion offer for Slack, a group messaging service that has quickly grown in popularity over the last few years. Then, remembering that it had already shelled out billions of dollars for Skype, Microsoft pulled out of negotiations with Slack. Now it seems Microsoft is planning to use the Skype platform to develop a Slack competitor, calling it Skype Teams and offering a fair amount of functionality that Slack doesn’t have – namely Office 365 integration.

That’s according to MS Power User, which points out that Office 365 integration and compatibility with services like OneDrive could be the features that make Skype Teams stand out from the rest, especially for businesses that use these services. Skype Teams won’t be entirely different from Slack, though, as it’ll still offer persistent chat channels for teams to use, along with granting users the ability to direct message one another.

Microsoft is said to be breaking away from the way Slack does messaging though, allowing for threaded conversations within channels. This means that users will be able to respond to a message with a chain of comments that resemble a thread of Facebook comments. It sounds like Skype Teams is trying to do away with the disjointed conversations that form as groups attempt to discuss different things at once, which is a nice thing to hear.

Of course, Slack does a lot of things right, and Microsoft plans to borrow some of those well-working features for Skype Teams. Perhaps most notably will be the inclusion of a sidebar, which features different tabs that allow users to jump between teams, access files, and view all of their direct message conversations. 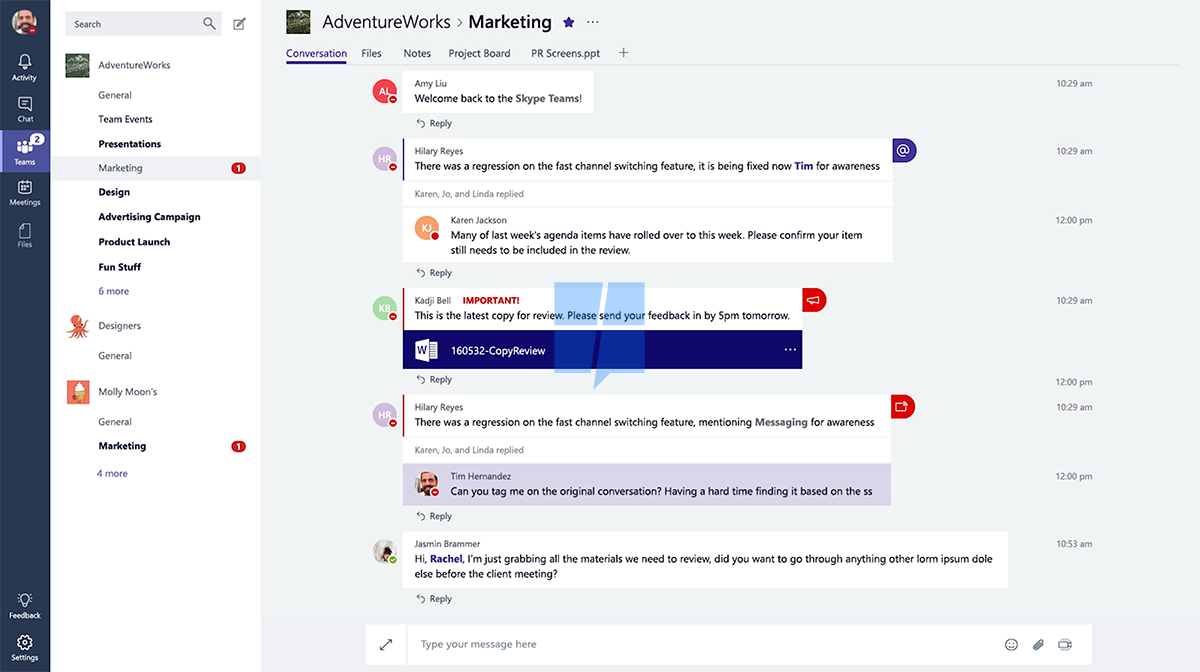 All in all, it sounds like Microsoft isn’t trying to iterate where it’s not needed – instead, it wants to add onto what Slack already offers, and you can bet things like Office 365 integration will make Skype Teams an attractive alternative to Slack for businesses that need to use a messaging platform in their day-to-day work.

Obviously, remain somewhat skeptical of these claims until Microsoft comes out with an official announcement, but keep in mind that Microsoft did intend to purchase Slack at one point in time, so to hear that it has plans to develop a team-based messaging platform of its own isn’t entirely surprising. MS Power User says that Microsoft is planning to roll out Skype Teams to Office 365 subscribers once its own internal testing is finished, and then at some point after, we should see it arrive with in-browser functionality and a Windows app, along with mobile apps for iOS, Android, and Windows Phone. Stay tuned.