Microsoft Modern OS: What we know about the anti-Windows

Microsoft gave some hints about their next operating system during this year’s Computex conference. It could still be called Windows, maybe Windows Lite, but probably (and hopefully) it’s got a name that’s completely new. This next-generation operating system will utilize the omnipotence of the internet to create a secure, solid experience that’s better than what’s expected by users.

Microsoft suggested that all devices* are “aware and connected to each other.” *Specifically they said “all of a user’s devices…” which we hope means there won’t be a necessary connection and/or awareness between ALL devices, but just one user’s alone.

Microsoft imagines a world where most or all devices are cloud-connected and utilize AI to stay updated and grow smarter as the user grows and changes. The new Microsoft modern OS will enable a variety of ways to interact with devices: pen, voice, touch, gaze, keyboard, mouse, and more.

The term “form factory agility” was used by Microsoft in their description of their modern OS. They’ve keyed in on sensor support as well as “posture awareness” to make this a reality. That means that if a manufacturer wants to make a device with 12 screens that turn blue when they face upward, this modern OS can make that happen.

Microsoft spoke about Security – which is great, and welcome. They used the key term “secure by default” and suggested that their modern OS would be sandboxed. They wrote, “the state is separated from the operating system; compute is separated from applications.”

No matter which device you use, your application will have your account, your login, your data, your most recent state of work. Applications will be the conduit through which work is done – all things will be apart, kept safe by degrees of separation.

This new modern OS experience seems to be relying heavily on the near-future of always-connected or at least always-available internet. “Always connected -with a modern OS Wifi, LTE 5G will just work – and users never have to worry about a deadspot.” They’re suggesting that 5G will change everything – that everything will work so quick, the term “loading” will seem outmoded.

Microsoft’s blog on the subject pointed to the following keys to this new modern OS: Seamless Updates, Secure by Default, Always Connected, Sustained Performance, Cloud-Connected, AI (Artificial Intelligence), Multi-Sense, and Form Factor Agility. One would hope that the similarities in key points between this proposition for a new operating system and Windows 8 do not point toward another less-than-fantastic first outing. 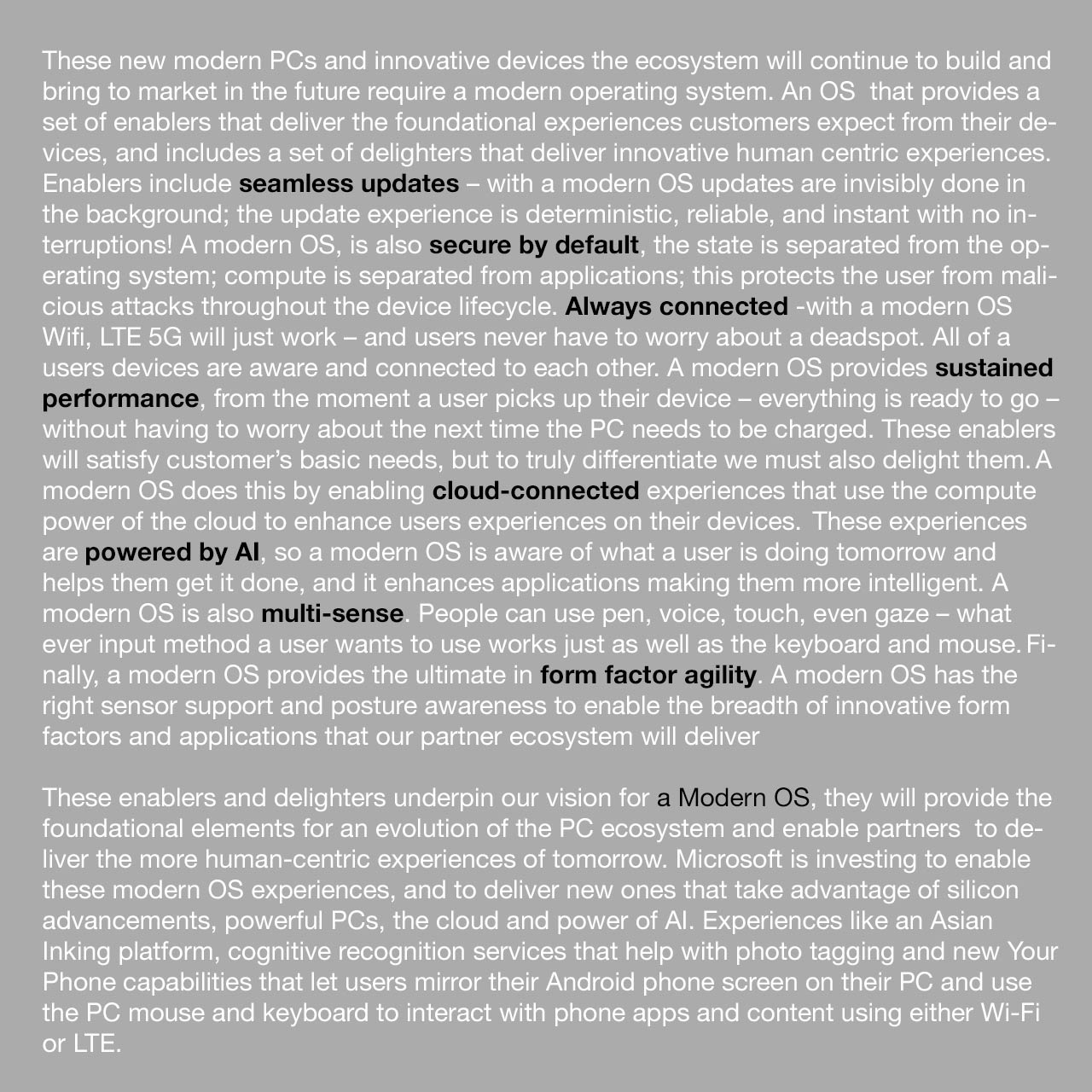 Is it really a new OS?

That’s a good question – it would SEEM that Microsoft’s presentation seems to avoid using the word “Windows” on purpose. Or if not, the paragraphs presented on the modern OS did not include the quintessential Microsoft operating system branding in a very strange coincidence.

It should be clear at this point that there’s enough interest in a new sort of operating system to a degree that Microsoft SHOULD be considering making something delightfully different from Windows. It’ll certainly still need to function in a way that eases in to a new era – running old Windows apps and such for a while – but we’ve slogged along with this old paradigm long enough. Cross your fingers Microsoft has the gumption to be the one to pave way past the age of the desktop.