Following its leak last night, Microsoft has made its self-branded Lumia 535 smartphone official, making it the first Lumia handset to eschew the “Nokia” name. The Lumia 535 is a decidedly entry-level smartphone, but it is well-rounded as far as features go, giving budget-conscious users a device that covers most of the bases they’ll care about most while drawing them nicely into the Windows Phone experience. As expected, the handset features a 5-inch IPS display with a 960 x 540 qHD resolution and Corning Gorilla Glass 3.

The modest display is accompanied by a Qualcomm Snapdragon 200 quad-core 1.2Ghz processor, 1GB of RAM, and 8GB of internal storage, as well as a microSD card slot that supports up to 128GB. This is joined by the selfie-centric 5-megapixel front-facing camera and the 5-megapixel rear camera with an LED flash. Sensors include an ambient light sensor, accelerometer, and proximity sensor, and connectivity is fleshed out with Bluetooth LE.

Microsoft promises the Lumia 535 will always have the latest version of Windows Phone with “regular over-the-air updates”, and that it’ll arrive with 15GB of free OneDrive storage. There’s Cortana and Word Flow, Action Center, and, of course, Live Folders. Right of the box, both the 3G Single SIM and the 3G Smart Dual SIM models will have the Lumia Denim Update.

The Lumia 535 will be arriving first in China, Hong Kong, and Bangladesh later this month, followed by other regions at an unspecified date later on. The price is set at 110 Euros, says Microsoft. The handset will be available in bright green, bright orange, cyan, dark grey, white, and black. 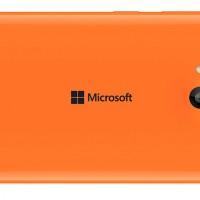 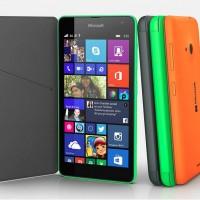