Wearable cameras like GoPro do a great job of giving a first-person view of extreme sports and other activities, but their often jerky footage can also end up doing a good job of triggering nausea. That’s where Microsoft Research’s new Hyperlapse system comes in, timelapse videos that run smoothly and pretty much jerk-free, despite coming from raw footage that jumps around madly.

Hyperlapse is the handiwork of a three person team in Microsoft’s research division, Johannes Kopf, Michael Cohen, and Richard Szeliski, who cooked it up in time for SIGGRAPH 2014 this month.

Rather than just speeding up the video and then trying to drop some of the glitchier frames doesn’t work, they point out, because doing so only magnifies the shake. Instead, they use a smarter algorithm to first create a 3D route through the footage. 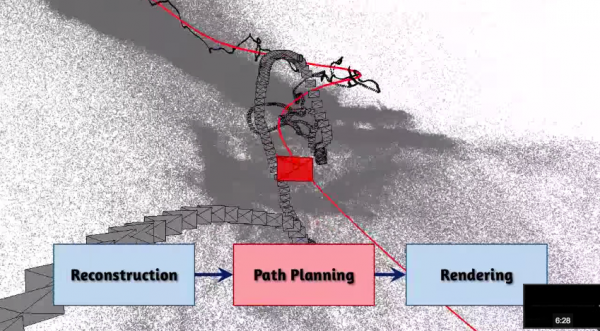 That path balances views that are smooth but at the same time ensure the virtual Hyperlapse camera is always pointing in the direction that the source footage can provide a view for. Individual frames then get rendered, and stitched together with blending to make sure the transitions are as smooth as possible.

In a sense, it’s similar to the analysis Microsoft’s Photosynth does for photos, but done with video instead.

The Microsoft Research team is working on a Windows app which would allow GoPro and other sports camera users to work out their own Hyperlapse videos too.