The folks at Microsoft appear to be taking several opportunities to give away Windows Phone devices on Twitter with a clever usage of the hashtag term #droidrage – thus far the response has been a mixed bag of respondents having real problems and a gigantic collection of obvious user errors gone wild. Taking the opportunity to gather in those Android users who aren’t able to fix problems on their own into the Windows Phone 7 and Windows Phone Mango fold is Microsoft’s latest tactic in showing off how simple the platform can be – what we’ll be waiting for here is the response from the people who though they weren’t able to figure out how to use an Android phone were then able to use a Windows Phone without a hitch. It’s likely that the storyline ends here, on the other hand, tracking further likely impossible.

Will you join in on the fun? Do you have an Android phone that’s been giving you so much trouble you could spit? Or in the case of the recent malware outbreak (which, mind you, happens on the regular for those foolish enough to download applications they haven’t properly vetted), have you found yourself in a hairy situation? Microsoft here banks on you finding your way into the Windows Phone world where everything is squeaky clean much in the same way Apple has been inviting people into the Apple fold because, as they are prone to note, viruses are supposedly non-existent on the Mac OS X platform.

You can follow along with those folks that’ve got nothing but problems with their Android phone by heading to the #droidrage tag on Twitter. Be sure to note though that you’ll be more than ridiculed by a fair share of Android fanboys OR may well find yourself inundated by people willing to help you with your problems before you get sucked into Microsoft’s mobile OS. That said, feel free to leave your Android OR Windows Phone horror stories below so we can get a full-on complaint festival going on here instead of going to the proper helpers, those being your friendly carrier Q and A friends! 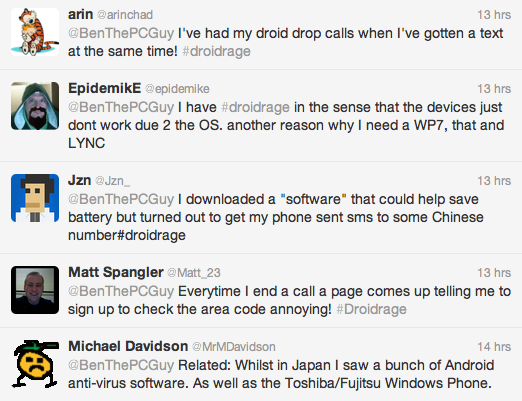