Microsoft’s CES 2010 keynote is only just starting – plagued by power cuts and temperamental on-stage PCs – but already Steve Ballmer’s surprise tablet unveil has been scooped.  The culprit is, ironically, Microsoft itself, prematurely posting the press release to their media site.  As for that mystery tablet, despite pre-show rumors its turned out not to be the Courier; instead, it’s turned out to be an as-yet unnamed HP touchscreen device. 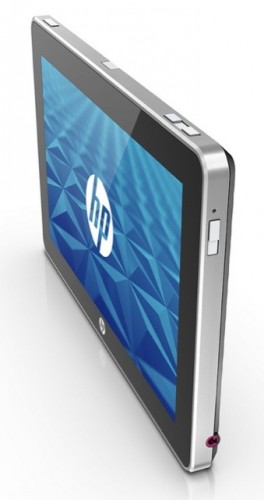 There’s a little more detail about the tablet on HP’s Next Bench site.  HP have also pushed out a statement regarding the keyboardless slate, which confirms that it will be launching sometime later in 2010 and based on Windows 7:

“An innovative slate product developed by HP was shown on stage by Microsoft’s Steve Ballmer during his 2010 CES keynote. It builds on HP’s pioneering work in touch as a natural user interface and uses the powerful Windows 7 operating system.  The HP slate product – yet unnamed — will be available this year. Pricing and specs will be disclosed near its commercial availability.” HP statement

As for the rest of the announcement, Microsoft CES Steve Ballmer is confirming that Project Natal will arrive in time for the 2010 holiday season, and has also been showing off the HTC HD2.  That’s confirmed for T-Mobile USA, as we heard from the carrier themselves shortly before the Microsoft keynote began.

Over 110,000 manufacturers, content providers, corporate buyers, engineers and media people converge each year in Las Vegas to identify the latest trends in consumer technology. More than 2,500 exhibitors show off their gadgets and technologies — from e-readers and 3-D televisions to free-standing solar panel systems.

During his keynote Ballmer highlighted the unprecedented innovation in the consumer electronics industry during 2009. Despite the economic turmoil the industry continued to deliver exciting new products and services at pace and, in Ballmer’s view, is set up for continued success.

2009 was a big year for Microsoft according to Ballmer, and he was optimistic about the opportunities to continue the success in 2010. From Windows 7 and Bing to Xbox LIVE, Microsoft has rolled out products that have won praise from reviewers and strong acceptance from consumers, and the company has a pipeline of exciting new products planned for 2010.

Ballmer highlighted recent success, starting with the latest sales numbers on Windows 7, and showcased some of the innovative new hardware manufacturers continue to roll out.

• Windows 7 is by far the fastest selling operating system in history. PC sales jumped nearly 50 percent the week Windows 7 launched.
• On Black Friday, retailers sold 63 percent more PCs than they did the year before.
• According to NPD, the 2009 holiday season saw greater than 50 percent year-over-year growth for Windows PC sales.
Current and future hardware shown on stage included:

• A new touch-enabled slate PC from HP
• The Sony VAIO L all-in-one laptop built for HD entertainment and multimedia content creation, and including a 24-inch touchscreen
• The Lenovo A300, one of the thinnest PCs yet at just 18mm, but with a 21.5-inch HD widescreen LED display
Bing

In addition, Ballmer announced that Microsoft and HP are teaming up on search and portal experiences. Bing will be the default search engine, and MSN the default homepage on HP PCs in 42 countries.

Ballmer looked back at 2009 and confirmed that Xbox and Xbox LIVE set new records:

• There are now over 39 million Xbox 360 consoles around the world, and more than 500 million games have been sold.
• Between Christmas and New Years Day, Xbox LIVE experienced its busiest week ever, adding a new member every second and a record of more than 2.2 million concurrent members online.
• Nearly 10 million people have logged into Xbox LIVE’s nongaming applications — Facebook, Twitter, Netflix, Last.fm, Sky, Canal and Zune — using their Xbox as a way to stay connected to friends and family.
• Xbox LIVE membership is now an active community of over 20 million people.
Windows Phones

Following the release of Windows Mobile 6.5 in October, Ballmer announced the upcoming exclusive availability of the HTC HD2 in partnership with T-Mobile USA, Inc. and HTC. Like other Widows phones on the market, the HD2 offers great customer experiences through an easy-to-use interface, extensive browsing capabilities and access to valuable services.

Delivering on the Connected Entertainment Vision

In an interview before CES, Bach discussed the potential of technology to change the entertainment experience. “We’ve reached a point with technology where it’s very feasible to listen to or watch whatever you want, whenever you want, whether on your smartphone, laptop or a connected TV in the comfort of your living room,” he said. “That concept of greater control is compelling to many people. It’s all about tying together these disparate technologies into a digital entertainment experience that’s consistent, easy to use and relevant to consumers’ needs.”

Xbox plays a multifaceted role in Microsoft’s digital entertainment strategy from gaming to changing the face of social entertainment, and Bach highlighted exciting plans for 2010:

• An lineup of what promises to be blockbuster exclusive games including Tom Clancy’s Splinter Cell: Conviction, Crackdown 2, Mass Effect 2, Alan Wake, and Fable 3
• The release of what will likely be the biggest game of the year, Halo Reach, continuing the Halo saga
• The new Game Room on Xbox LIVE, which will be the place to relive the glory days of arcade games, with over 1000 games being released throughout the next three years.
Then Bach gave a behind-the-scenes look at the work behind “Project Natal,” the controller-free gaming experience that tracks movement of the body and facial expressions, and even responds to your voice.

Scheduled to be available in holiday season 2010, “Project Natal” is only the most recent example of Microsoft’s work creating natural user interfaces. Other examples include Microsoft Surface, Windows Touch and Ford SYNC, the voice-controlled, in-car communications and entertainment system that Microsoft jointly developed with Ford.