Today we’re looking at and listening to the brand new album from the people who make Meow Mix. The folks at the J.M. Smucker Company released an album with 5 remixes of their eponymous Meow Mix Jingle. “The Meow Remix Sessions” is a real vinyl album you can purchase from Amazon right this minute for around $10 USD, and it comes with a coupon for a bag of cat food, too.

First, take a peek at the cover of this album. It’s iconic in its own right. It’s influenced by some of the greatest album artwork of all time – and we’re still trying to figure out the combination used by the designer. It’s like a tunnel into the kitty mind. 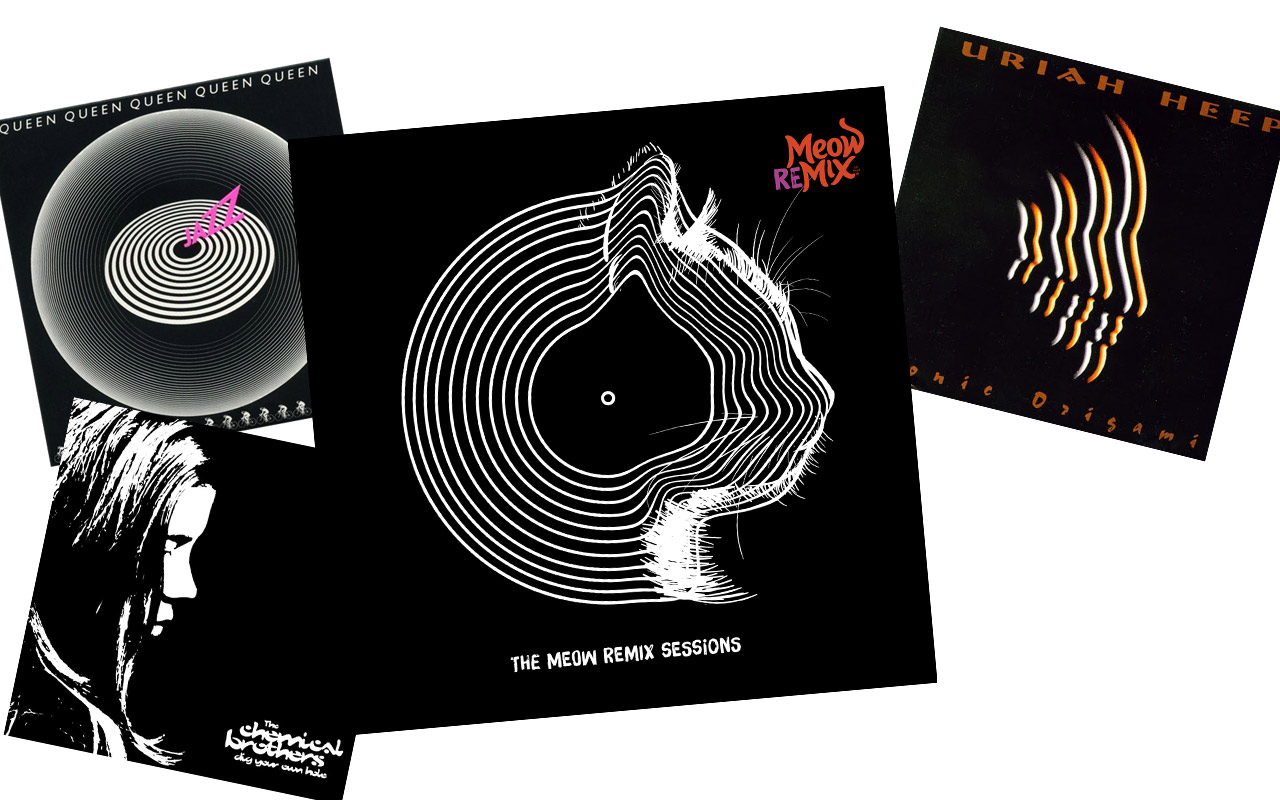 The songs on the album can all be found in digital form on YouTube. Take for example “Meow Mix Jingle of Sorrow” by the band ENDLESS HISS! This is sort of like a black metal sort of iteration of the jingle. It is epic.

This album includes a few other bits from the Official Meow Mix YouTube channel, too. It’s all part of a campaign that also rolls over to the Meow Mix Remix website. It is there that you’ll find another avenue down which the PR group responsible prove their genius – or their madness – with pages and pages of articles written about fictional(?!) cat bands with “Celebrity Catsightings”.

That same page shows “music reviews” for the cat bands included on the vinyl album we have today. Reviews cover Luna, Gatocito ft. Pata Suave, Endless Hiss, Hearts & Paws, and Sweet Teddy Pepperpaw! They’ve released the songs (back in February of 2020) and put the collection in a Spotify playlist for your perusal. 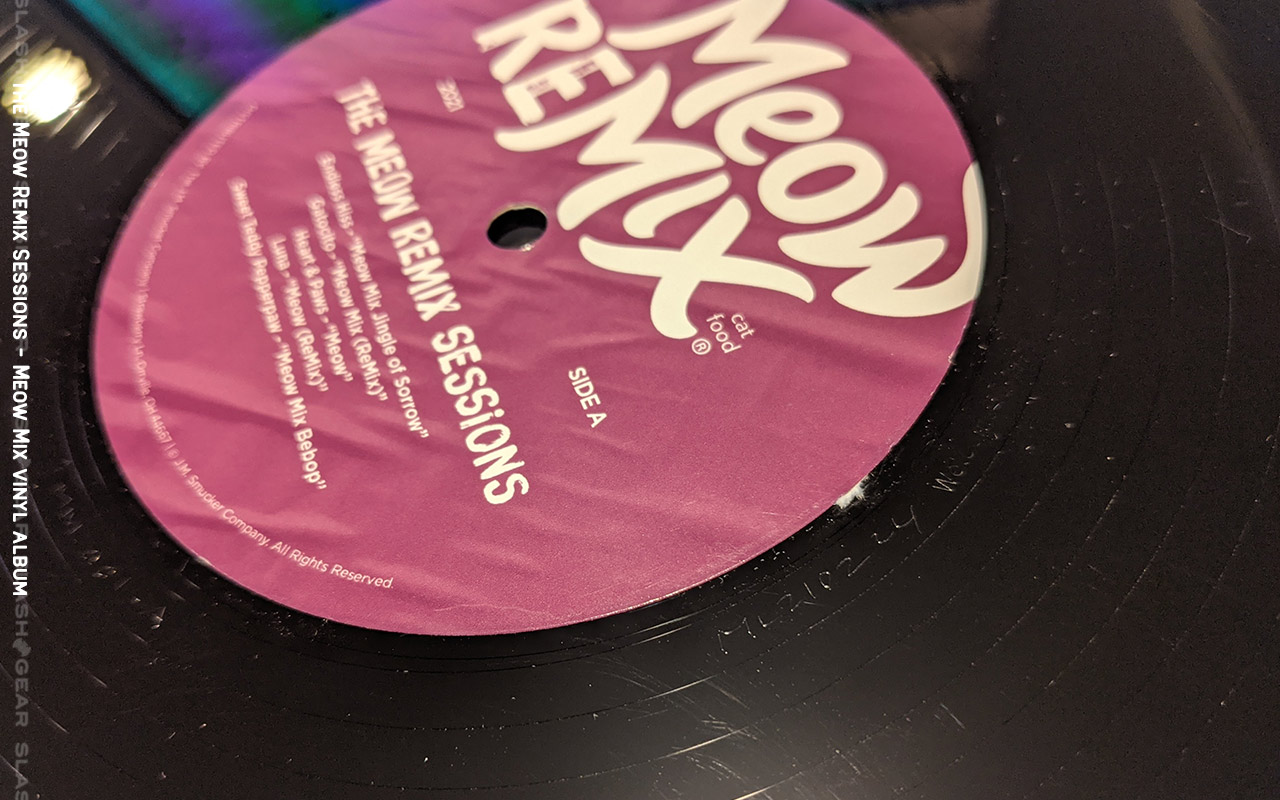 The vinyl album released this week is a very strange piece of ephemera. On one hand it would appear to be the most absurdly attractive vinyl album release any cat owner could hope for. On the other hand, it only really has approximately 2 minutes and 30 seconds worth of music on it.

One side of the vinyl has very, very little of its entire capacity filled. “Side B” is entirely blank. Like, flat, never pressed, blank. They were kind enough to put the Side B label on this side of the album, but there’s nothing there for your record player to play. 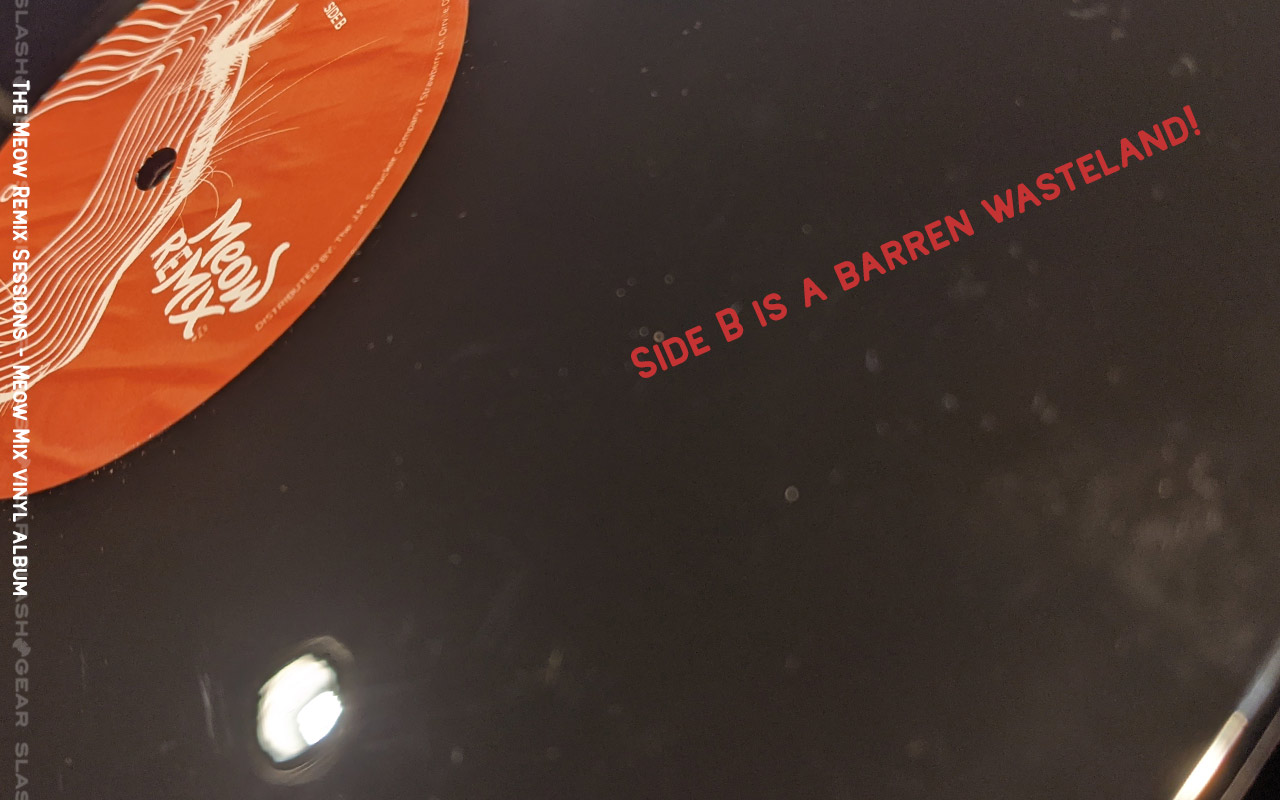 The album was sent in a 12-inch x 12-inch carboard mailer, substantial enough to keep the album and its cover safe all the way to our door – but the album cover isn’t particularly substantial. It’s more like a 24 x 12-inch piece of paper folded over once to appear like a standard album sleeve. 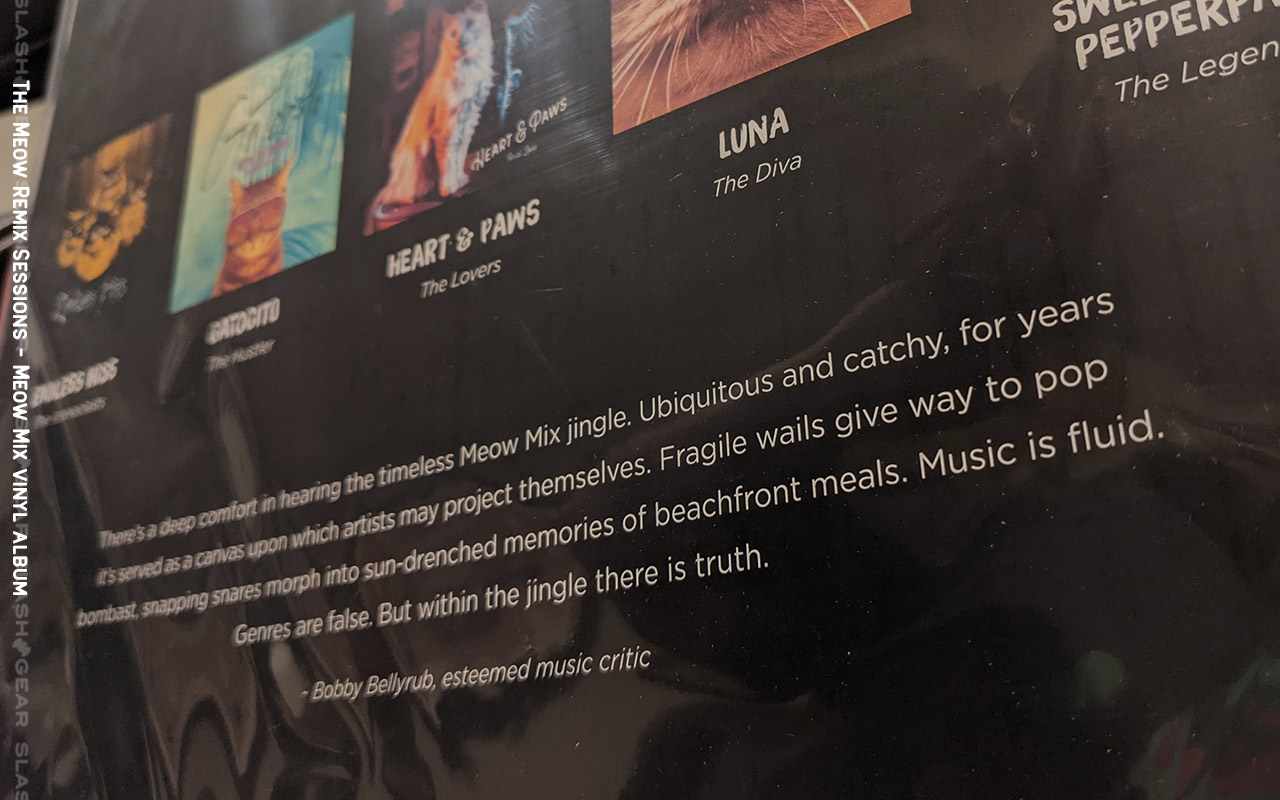 There is a secondary white paper sleeve inside, likely standard for any record pressing ever, anywhere, so it’s not like it’s in there completely unprotected. The printing quality on the “sleeve” and the album Side A and Side B stickers is good, and the vinyl is substantially thick. 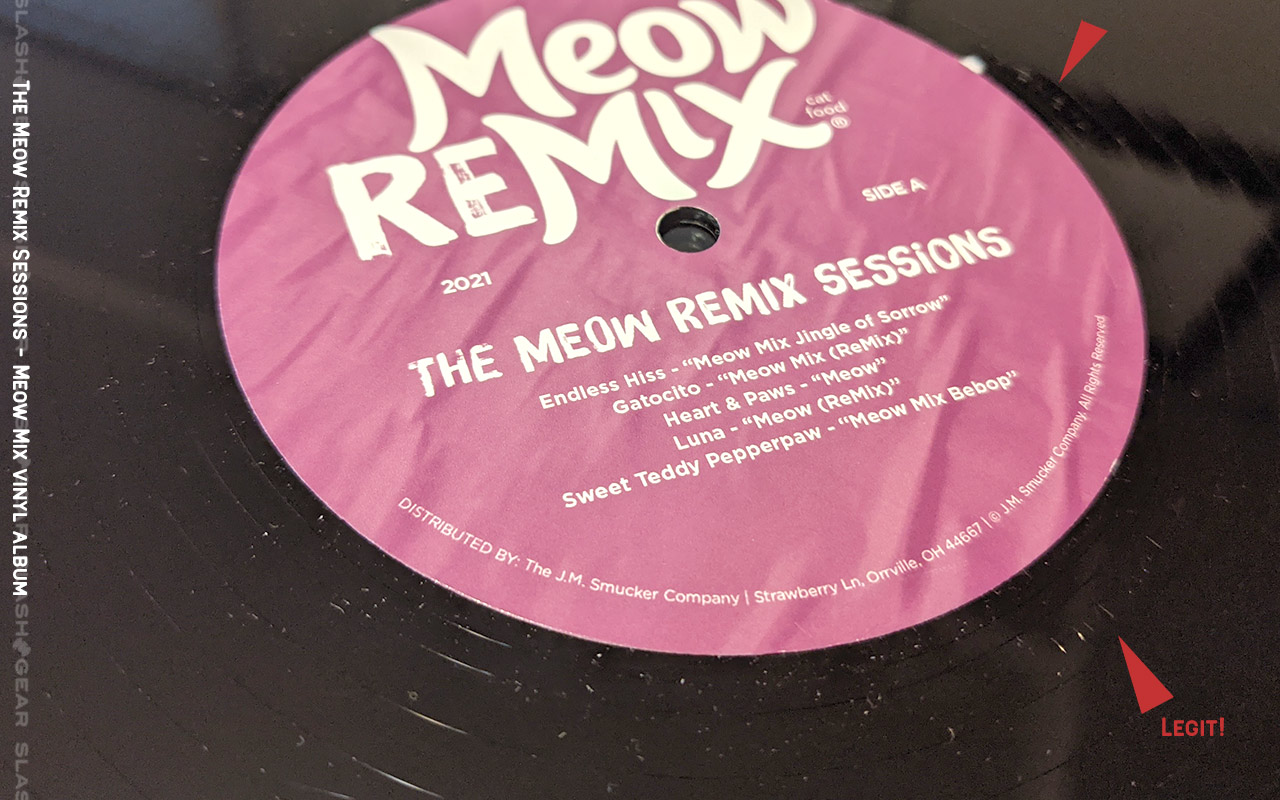 You’ll find the standard hand-scratched approval codes around the rim of the sticker on the vinyl, too – whoever handled that part of the creation process wasn’t about to let the strange nature of this release affect their product quality. 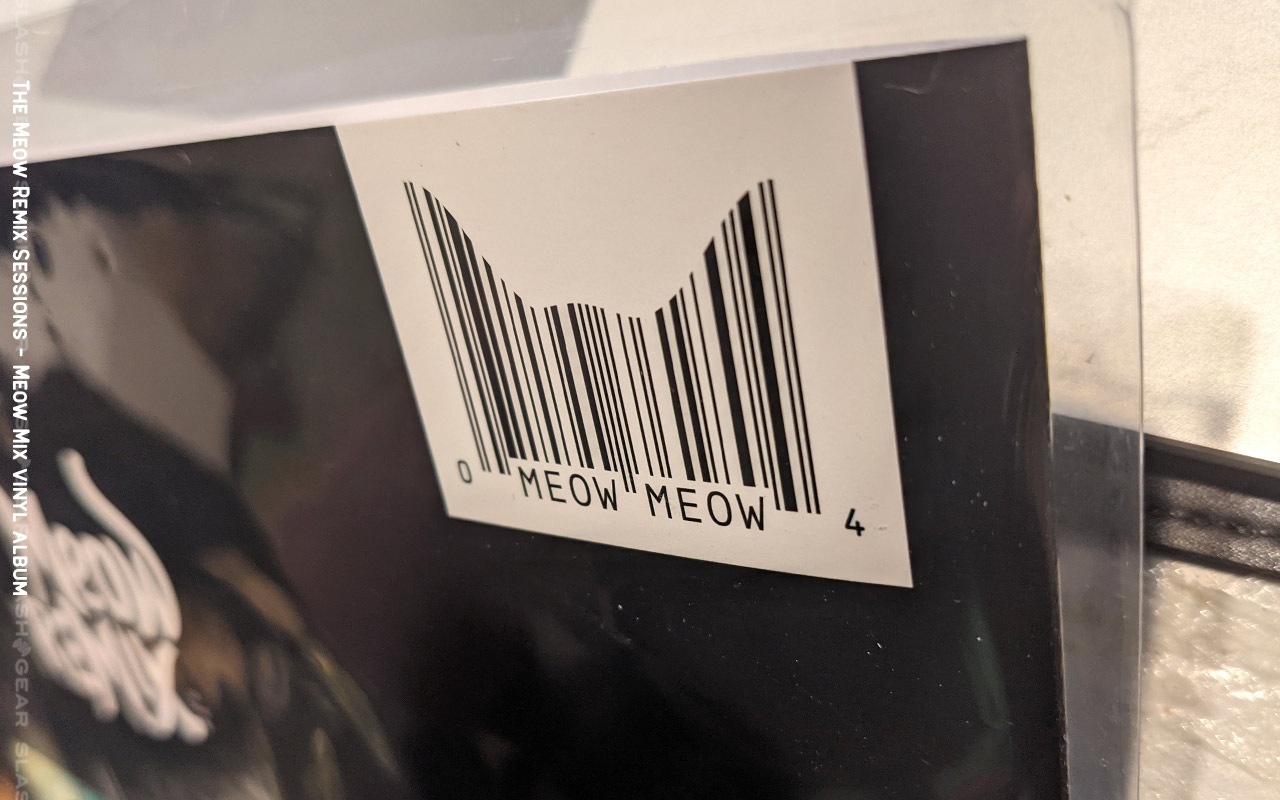 Is this the perfect cat loving hipster birthday gift? It might very well be. They’ve suggested that they’ve made a limited amount of albums, so they MIGHT be gone by the time you read this article – fair warning on that! They’ll be sold on Amazon while they’re available.