Apple has unexpectedly increased the price of a RAM upgrade on the entry-level 13-inch MacBook Pro, quietly doubling how much it takes to equip the notebook with 16GB of memory. The change only comes less than a month after the company actually launched the new notebook, with changes like the new Magic Keyboard first seen on the 16-inch MacBook Pro.

The entry-level 13-inch MacBook Pro actually doesn’t stray too far from its predecessor. While more expensive models in the range get Intel’s newer 10th Generation Core processors, the more affordable models stick with the same 8th Gen Core as the last version.

The standard memory with the entry-level notebook is 8GB of 2133MHz LPDDR3. However Apple was offering a $100 upgrade, to double that to 16GB. Apple ships those upgraded orders direct, rather than offering them as off-the-shelf configurations you could buy straight away in an Apple Store. 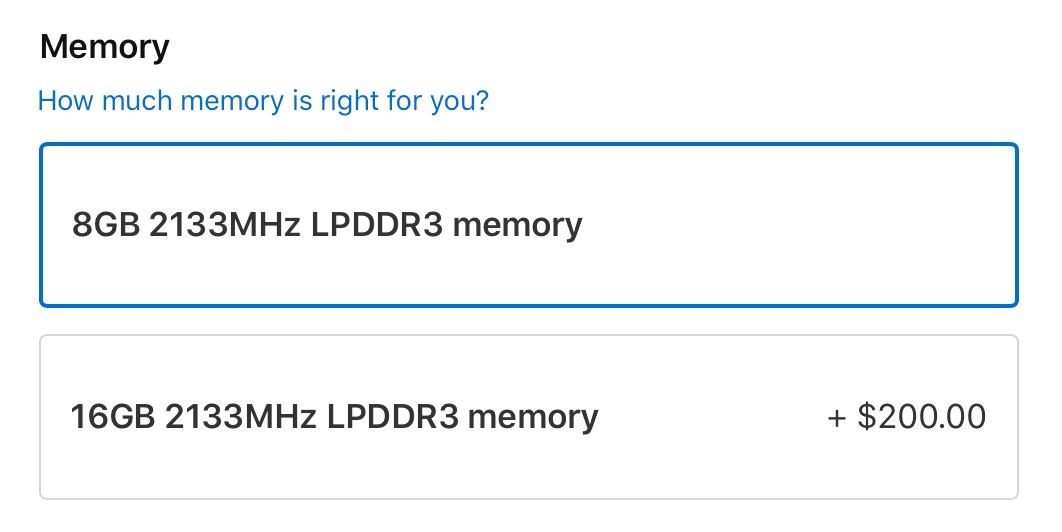 Now, though, that same upgrade will cost you $200. MacRumors spotted the change, which seemingly only impacts this one version of the MacBook Pro.

It’s unclear why the change took place, but a likely reason is that the supply chain has forced Apple’s hand. Prices for things like memory and storage can fluctuate dramatically, the market being swayed by numerous factors including demand for certain types of chip. Larger-scale issues, like the Coronavirus pandemic or, before that, other natural disasters, can also have an effect on what factories of computer hardware parts can produce, and thus the prices those parts command.

What’s more typical is that manufacturers like Apple either absorb the changing cost – including in the cases when it becomes cheaper for a certain component – or for them to stop offering those options altogether until affordable supplies become more readily available. With the 16GB memory upgrade being such a mainstream option, however, the latter was presumably not possible.

Instead, it looks like Apple has made the decision to pass the costs on to consumers, at least on a model where its margins are presumably among the thinnest. Other 13-inch MacBook Pro models – such as those using the 10th Generation Core processors – are unaffected at this point, presumably since they rely on a different type of memory.