Meizu MX4 sees ambitious Chinese upstart innovate on its own

Meizu has revealed its latest Android smartphone, the MX4, packing a 5.36-inch display and switching to aluminum alloy so as to make the slimmest phone the ambitious Chinese company has launched to-date. Coming in at 7.9mm thick, the MX4 has a Full HD display with 500 nit brightness, an octacore Mediatek MTK6595 2.2GHz processor, and packs a 20.7-megapixel Sony camera.

That camera, so Meizu claims, has 250-percent higher pixel quality with a 1/2.3-inch CMOS that increases each pixel to 1.2um. As a result, on paper at least, “useful sensitivity” is up 90-percent.

Meizu has paired it with an image processing engine it calls Loop Focus, and which focuses in 0.3 seconds. A dual-tone LED flash adjusts to scene conditions, while the front camera is 2-megapixels

Meanwhile, the display’s technology isn’t limited to brightness. The 5.36-inch panel also has a 1,100:1 contrast ratio and an 85-percent increase in color gamut. It’s driven by a PowerVR G6200 MP4 GPU, and Meizu has bonded the Gorilla Glass 3, the screen, and the CNC machined alloy body together. 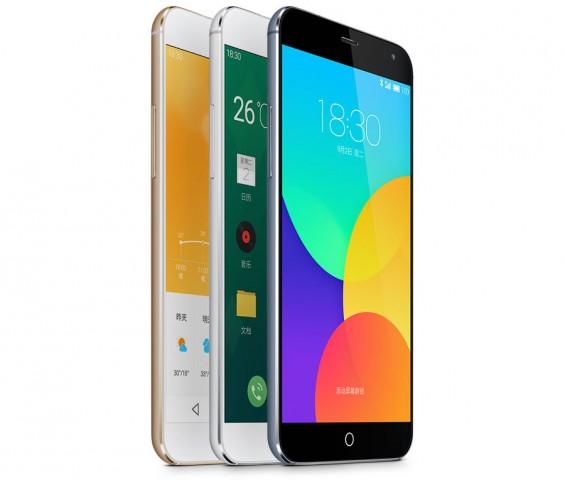 In fact, the system – which also uses the 0.32mm layer of adhesive involved as a shock absorber, soaking up minor knocks to the display – is so unusual, Meizu is trying to get it patented. Screen bezels are 2.6mm wide.

Flyme 4.0, Meizu’s custom skin on top of Android, has been updated, and gets 2GB of RAM to play with and either 16, 32, or 64GB of storage. Connectivity includes LTE, WiFi a/b/g/n/ac (2.4/5GHz), and Bluetooth 4.0, and there’s GPS/GLONASS and a barometer among the usual sensors.