The 813hp McLaren Senna GTR is a track day fever-dream

If you thought the McLaren Senna couldn’t get any more extreme, you were wrong: the Senna GTR is here to prove that fact. The most potent track car that the British automaker has ever created, it takes the DNA of the Ultimate Series flagship and gives it the sort of performance that should make it unstoppable around a circuit.

McLaren had dropped heavy hints that it was working on something special when it revealed the Senna GTR concept in Geneva last year. Now, the production version has been given its official debut, all 813 horsepower of it. 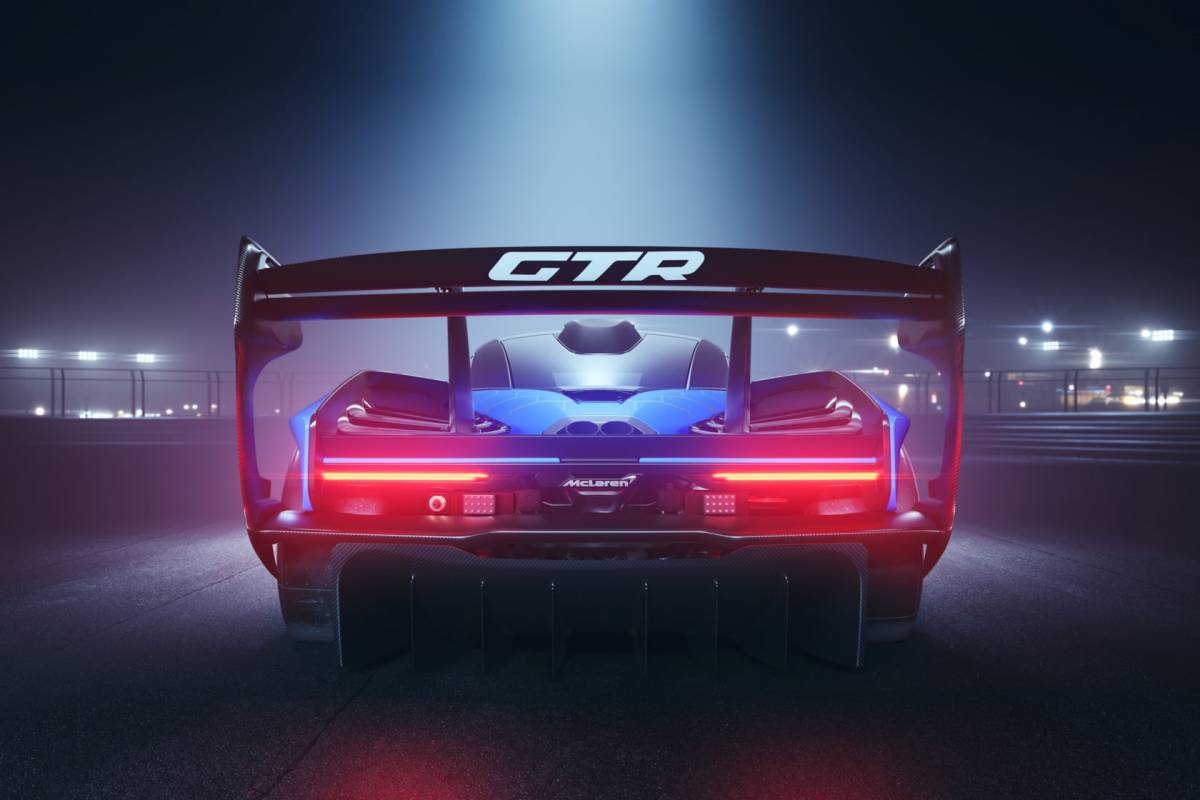 Without that pesky road car legislation to think about, McLaren has been free to turn the Senna GTR up to eleven. That means less weight, more power, and GT3-derived engineering, including the new suspension system. No two cars should be alike, either, given the McLaren Special Operations (MSO) division will be lending a hand to customize everything from paint through to cabin.

The Senna GTR engine is a specially-tuned version of the 4.0-liter twin-turbo V8, dubbed the M840TR. It gets 814 hp – top 25 hp over the regular Senna – with 590 lb-ft of torque. McLaren recalibrated the engine’s ECU, and then remove the secondary catalyst altogether so that back pressure could be reduced (not to mention leaving the whole thing sounding a lot more wild). It weighs just 2,619 pounds dry, and that hunt for the lightest possible car was what led McLaren to reroute the tailpipes. In the concept, they poked alluringly from the sides; the production car positions them in the more common position at the rear. According to the automaker, “the side exit pipes may have looked the part, but the rear exit pipes provided the shortest, quickest route for exhaust gases to exit, saving weight and reducing complexity.”

The powertrain can be switched between three modes: Wet, Track, and Race. Wet is new, with more support for the ESP and ABS to handle wet tires. The 7-speed plus reverse SSG transmission has been carried over, with a Launch Control option.

The Senna was slippery through the air and not lacking in downforce, but the Senna GTR goes even further. Peak downforce exceeds 2,205 pounds, in fact – 442 pounds more than the road-going car – at 155 mph. Arguably even more important, the GTR matches the road-going Senna’s downforce at 15-percent lower vehicle speeds. 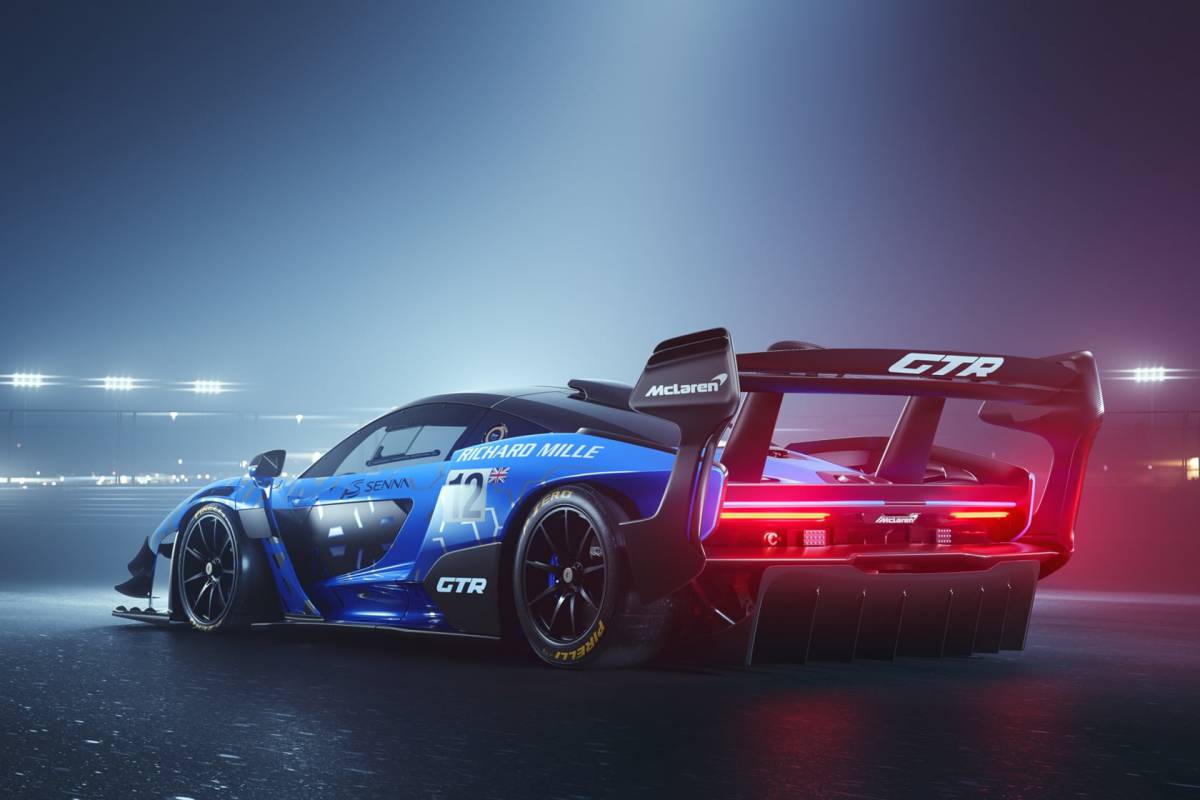 The front splitter is reprofiled, and the rear diffuser actually reduced in size from the concept. New dive planes on the front corners, along with vortex generators, work to make airflow under the car more stable. A new rear wing – with LMP1-style endplates – has been added, and the trailing edge now sits outside the car’s footprint.

Active aerodynamics include an articulated rear wing – which can be automatically “stalled” for maximum speed – and active aero blades either side of the Low Temperature Radiator. In all, McLaren says, the Senna GTR should be not only grippier in high-speed corners but at lower cornering speeds, and during braking.

McLaren starts with its McLaren Monocage III-R central structure, complete with an integrated roll cage and harness mounting points. To that it adds an aluminum front subframe and aluminum engine frame, with composite crash beams front and rear. The car sits 1.3-inches lower than the regular Senna, while front track is up 3-inches and the rear up by 2.7-inches. 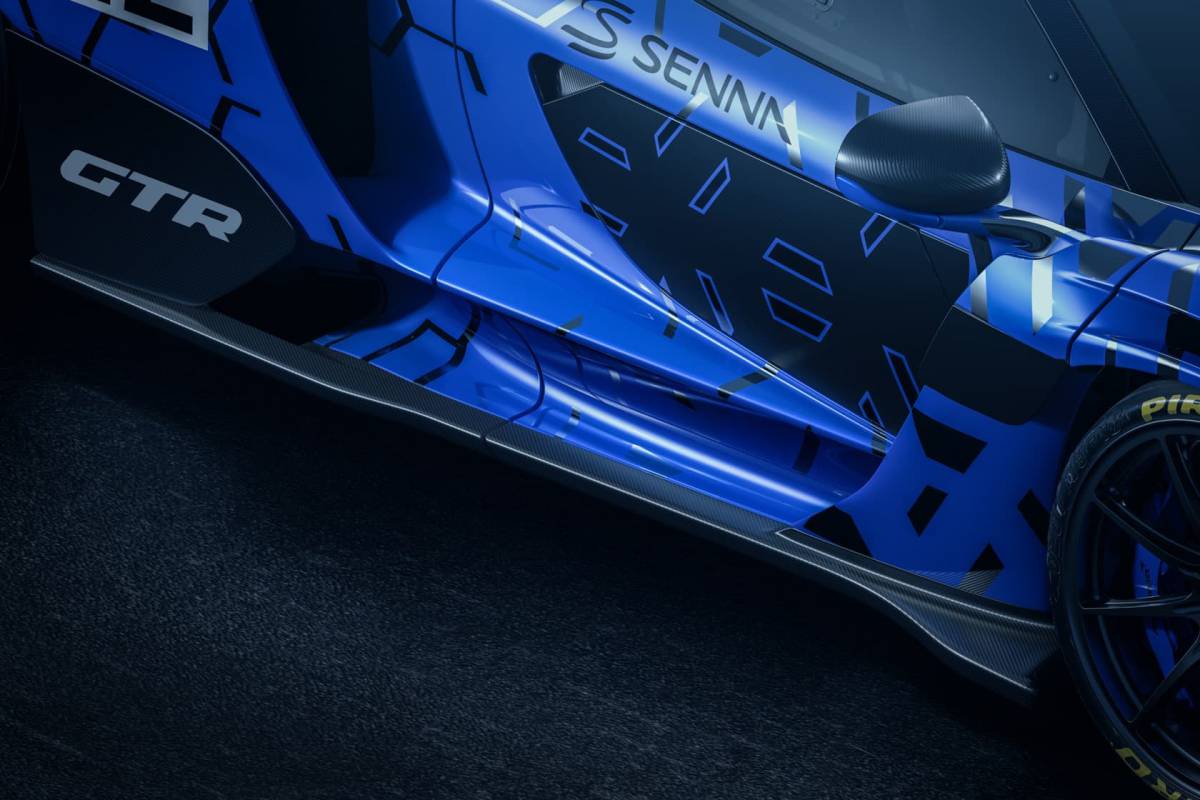 Variable ride control suspension is ditched, replaced with aluminum double wishbones, springs, uprights, and anti-roll bars developed for McLaren’s GT3 cars. Four-way adjustable dampers are fitted, as are solid bushes and adjustable camber. For slowing down, there are forged aluminum monobloc six-piston calipers at the front and four-piston at the rear, each clamping on 15.4-inch layered carbon-ceramic discs with machined cooling vanes.

Wider fenders surround 19-inch center-lock wheels with Pirelli slicks. There are also pneumatic air jacks, a pit radio, a fire extinguishing system, and a data logger. A polycarbonate windshield is accompanied by polycarbonate windows in the soft-close dihedral doors; the fuel filler is a race-style dump-churn type. Glossy exterior carbon fiber is standard.

A cabin fit for racing

Inside, the McLaren Senna GTR looks a little different from the road car. Gone is the infotainment system, and indeed the audio system has been junked, too. Air conditioning remains, but the airbags are removed.

Left-hand drive is standard, and McLaren won’t be making a right-hand drive version. An FIA-approved, lightweight carbon-fibre racing seat and six-point FIA harness is fitted; a passenger seat is a no-cost option. McLaren wraps the sills in black carpet but nowhere else; the headlining is Alcantara. 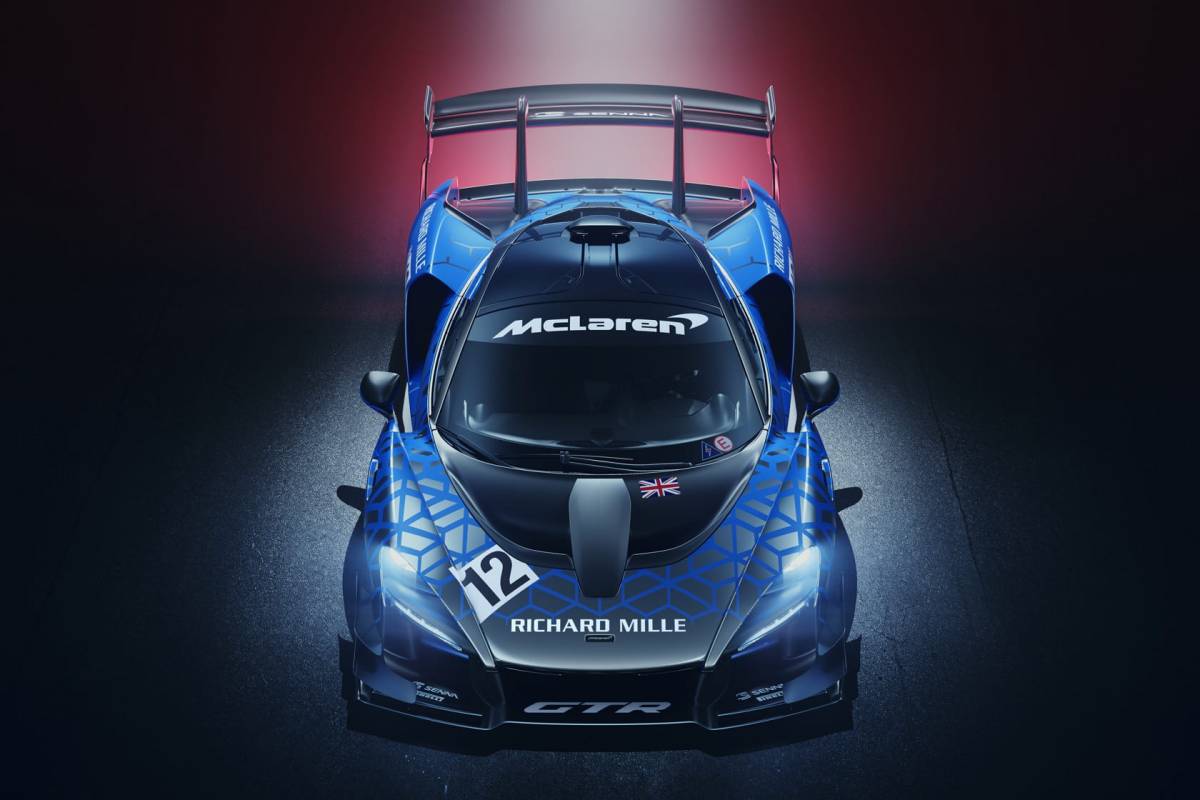 Race-spec instrumentation has been added, with gearshift LEDs along the top of the driver screen. More LEDs along the sides show the closing distance of cars behind, using an anti-collision radar system as in endurance racers. A simple center display shows the rear camera view, and there’s a race-spec steeling wheel with remapped buttons, quick release, and integrated paddle-shifters.

Only 75 of the Senna GTR will be produced, McLaren says, with pricing standard at £1.1m plus taxes ($1.44m). If you were hoping to treat yourself to one, though, think again. McLaren says all of the cars were snapped up by buyers “within weeks” of the concept being previewed last year.