A new comic called Silver Surfer: Black #5 was released this week with new insight into the origins of the Marvel Universe. At this moment in time it’s important to note that the following article requires a SPOILER ALERT for the comics in the “Silver Surfer: Black” series. Once you read this article, there’s no going back to a time when you didn’t know the deal. The details of this series are too important to not report on here – or at least they’re important if you’re the sort of person who enjoys knowing the most KEY details of the history of Marvel Comics.

If you head back to the origins of this comic series, you find that you’ll need to start before the Silver Surfer: Black comics began, back to Guardians of the Galaxy Annual #1. In said book, some very bad villains called the Black Order created a very dangerous black hole that had potential for ultimate ending of the entire Marvel Comics. Instead it sorta triggered the opposite.

In said Guardians of the Galaxy comic, our hero Norrin Radd of the planet Zenn-La (aka The Silver Surfer) destroyed the black hole. As we know, not a whole lot is truly known about black holes. As such, black holes are GREAT plot devices for stories of space adventure and science fiction. In this reality, when the Silver Surfer destroyed this black hole, he also entered said hole, like a portal, and was dropped back in time. He awoke billions of years in the past.

In the past, our friend Silver Surfer met with the entity known as Knull. You might not know Knull if you’ve not been reading Marvel Comics in the past half-decade. He appears first in the book Thor: God of Thunder 006 (March 13, 2013) in a flashback (without a name, at said time), and made his first real appearance (with name) in Venom 003 (June 27, 2018). 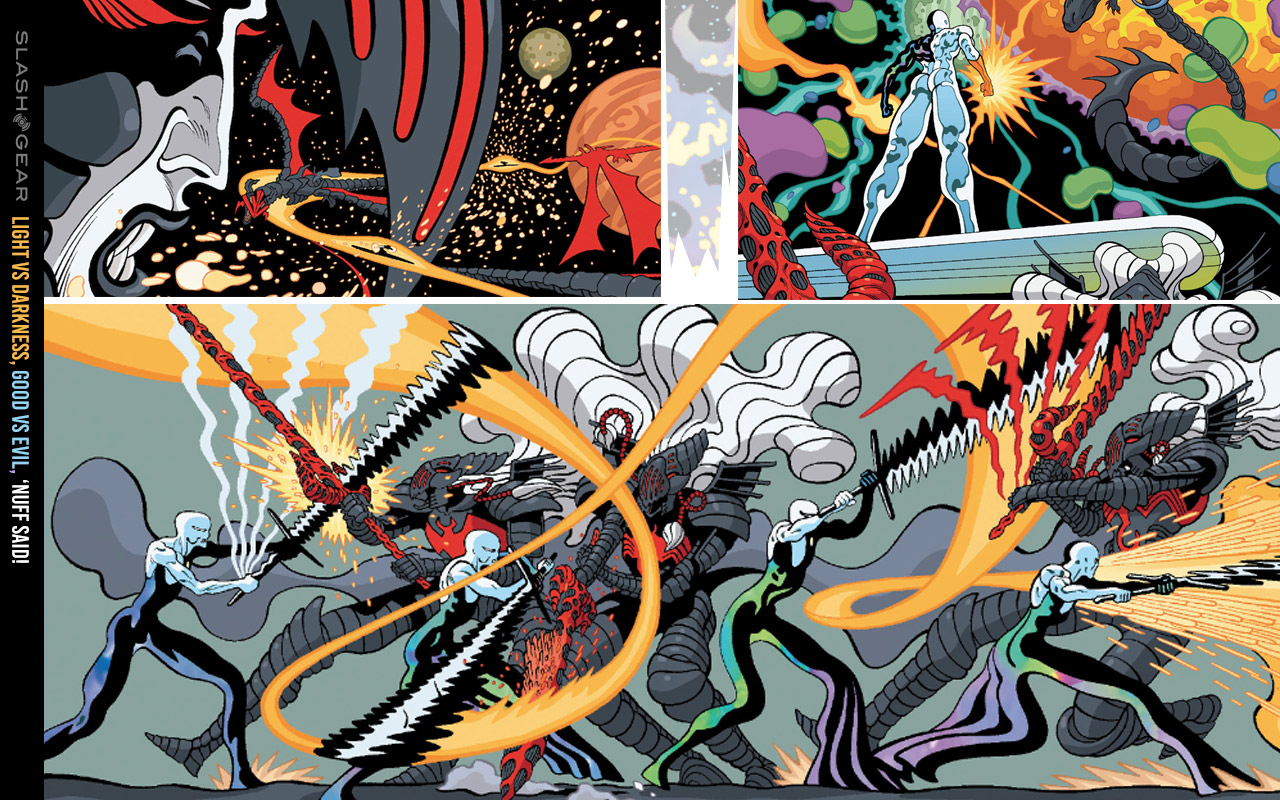 This far back in time, not a whole lot exists. But there is Knull, “God of the Symbiotes” (yes, that includes Venom and Carnage and all that good stuff). Silver Surfer clashes with Knull, and must escape. He meets Ego, The Living Planet (played by Kurt Russell in the movie Guardians of the Galaxy Vol. 2).

As so often happens in Marvel Comics (and in comic books in general), there are multiple stories that go with the origins of any one character. With Ego, here, he’s not necessarily the same character he is in the Marvel Cinematic Universe, or even really the same character he was when he first encountered Thor back in The Mighty Thor #132 (September 1966).

In this case, Ego is somewhat of a good guy, as he assists the Silver Surfer to “reach out across the cosmos to every living force to draw strength” to create a weapon. This weapon is also said to be made from “the infant life of the universe”, and will ultimately defeat (or at least beat back) the “God of Dark” Knull.

Silver Surfer and Knull do a little battle, including a bit of a fight where the Silver Surfer’s board is transformed into a sword! The Surfer holds “A silver blade of cosmic power. Made of its creator’s broken, living flesh.” Knull holds a sword called “All-Black the Necrosword!”

Knull attacked and essentially defeated the Silver Surfer, but just before death, our hero unleashed an “infant sun” of energy created with “the last of” the Surfer’s cosmic power. Knull is knocked back and away – for how long, we do not know, but certainly not forever.

In the process, the Silver Surfer also takes what he describes as “the weapon I retrieved from ego” and falls to a “nameless barren planet.” He then takes that weapon and “forges” the “infant life of the universe” into “galactic seeds.”

The plant that grows is the first life of the planet that’ll eventually become Zenn-La, the planet where The Silver Surfer will (one day) be born. The Surfer then explodes into light, into atoms, and those atoms travel across existence.

“Over eons” those atoms “fall like seeds across the galaxy” and allow the Surfer to be forgiven for all his transgressions*. Per the Surfer, these seeds gave “life to those planets I watched die.”

*Remember, The Silver Surfer entered the Marvel Universe as a bad guy! He was the Herald of Galactus, and witnessed the death of many worlds!

Some of the planets and places named in this creation process are The Ice Giant Massikron, Elynore-143, and Draven-Barr. And countless others. And it is at this point that we (once again) recognize that the Silver Surfer is basically the most awesome character in the Marvel Comics universe and indeed the history of comics – because he’s super shiny!

SIDENOTE: Knull has a “dragon” in this comic. The dragon isn’t really explained, so much – he’s basically just the equivalent of the Silver Surfer’s surf board, at this moment, something that looks really awesome and allows the character to ride into battle, rather than just fly (like every other dang superhero/villain in the universe).