This week a paper published in Nature Geoscience showed the potential for a whole lot of oxygen on the planet Mars. Within the salty waters under the surface of the planet, Mars may well have enough oxygen to support life, planet-wide. These scientists suggested that “our findings suggest that there can be near-surface environments on Mars with sufficient O₂ available for aerobic microbes to breath.” That’s “even at the limits of the uncertainties” they calculated in time and space – the possibility is there.

“Little attention has been given to the role of O₂ on Mars, due to its scarcity,” said the research paper this week. “However, geochemical evidence from Martian meteorites8 and manganese-rich rocks points to highly oxidizing aqueous environments on Mars in its past, implying that O₂ played a role in the chemical weathering of the Martian crust.”

HERO PIC: Aram Chaos, a 280 kilometer-diameter ancient impact crater that lies within in the Southern Highlands of Mars. NASA/Mars Exploration

Of note is the fact that the calculations this team ran were only on surface and shallow subsurface liquid brines. That’s where brines “are assumed to communicate with the atmosphere.” Basically they’re assuming there’s no 3rd-party in play, like a human-made machine that pulls water from the lower layers of the planet and disperses in a manner that’d allow habitability for the planet. That’s science fiction stuff, for now.

ABOVE: This May 22, 2015, view from the Mast Camera (Mastcam) in NASA’s Curiosity Mars rover shows the “Marias Pass” area where a lower and older geological unit of mudstone — the pale zone in the center of the image — lies in contact with an overlying geological unit of sandstone. NASA/Mars Exploration

This team focused on the masses of salty water that might well be on the surface or near-surface on Mars. “We find that, on modern Mars—accounting for all uncertainties, for our best estimate and the worst case, both with and without super-cooling and also for temperatures above 273 K where our solubility model has been validated—the solubility of O₂ in various fluids can exceed the level required for aerobic respiration of ~10⁻⁶ mol m⁻³ for microbes by ~1–6 orders of magnitude,” said the researchers.

“In Ca- and Mg-perchlorate brines, O₂ solubilities can reach values comparable to the concentrations of O₂ in Earth’s oceans today”

They suggested in the paper that here on Earth, before the Great Oxygenation Event around 2.35-billion years ago, the solubility of O₂ in seawater (assuming modern salinity and 293 K) was “probably ~10⁻¹³–10⁻⁶ mol m⁻³”. As such, “the dissolved O2 levels on early Earth were primarily below the minimum concentration of dissolved oxygen needed to support aerobic life.”

Because temperatures on Mars are colder than that of early Earth, Mars enables greater O₂ solubilities. Mars also has trace amounts of O₂ in its atmosphere that we’re already aware of. “Thus, in principle, Mars could offer a wide range of near-surface environments with enough dissolved O2 for aerobic respiration like that seen in diverse groups of terrestrial microorganisms.”

So, even if we don’t find enough oxygen in the brine on Mars, we could potentially find a way to bring our own from home. Or something along those lines. We can dream! 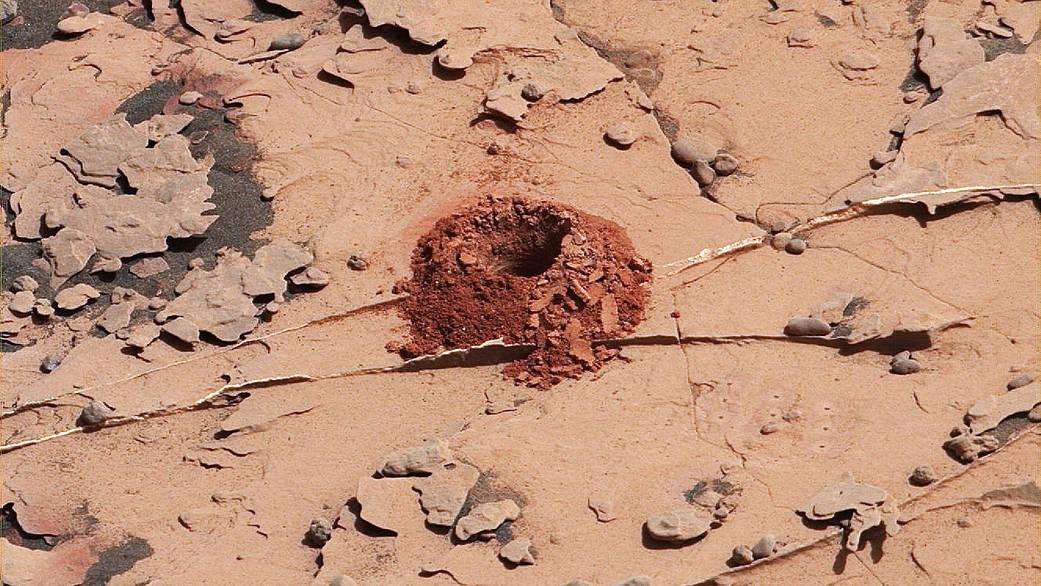 ABOVE: This close-up image is of a 2-inch-deep hole produced using a new drilling technique for NASA’s Curiosity rover. The hole is about 0.6 inches (1.6 centimeters) in diameter. This image was taken by Curiosity’s Mast Camera (Mastcam) on Sol 2057. NASA/Mars Exploration

For more information on this subject, see the publication Nature Geoscience. There you’ll find the paper “O₂ solubility in Martian near-surface environments and implications for aerobic life” published online on the 22nd of October, 2018. This paper was authored by Vlada Stamenković, Lewis M. Ward, Michael Mischna, and Woodward W. Fischer. This paper can be found with code (URL) https://doi.org/10.1038/s41561-018-0243-0 right this minute.