If you were wondering why the photos coming back to us from NASA‘s Curiosity rover on Mars were so small, you certainly aren’t alone. As Curiosity’s camera project’s manager Mike Ravine explains to the Digital Photography Review, it’s not a matter of being able to put a more high quality camera aboard, it’s the data transfer. While your smartphone is capable of transferring gigabytes of memory a day if you really want it to, the Mars mission is limited to 250 megabits per day – that’s 31.25 megabytes (MB) and NASA certainly wasn’t about to dedicate that whole amount to photographs only.

The Curiosity rover is sending data to Earth in several ways, but only its UHF transmitter is able to push a large enough amount of data back to send images. The next issue was the fact that the same sensor had to work for four different cameras onboard: MAHLI, two Mastcams, and the camera set to capture the machine’s descent to the planet – MARDI. Each of these cameras were built around one single platform so that each of them would not have to be re-tested and qualified for the mission. This way of accomplishing NASA’s goals makes everything less expensive and more dependable in the end.

“We developed all four cameras around a common architecture so the choice of sensor was hedged across all of them. We wanted to be able to capture high frame rates, particularly with the descent camera. We also looked at a 4MP sensor but it would have run around half as fast. And the state of CMOS sensors wasn’t credible in 2004. They’re an interesting option now, but they weren’t then.” – Ravine 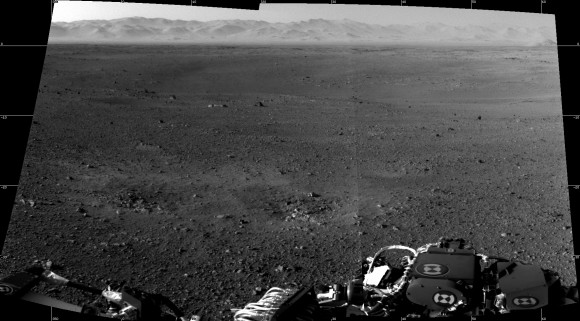 Ravine also explains that they were not able to get some of the equipment they’d hoped to be working with approved and on-board in time for the launch, including the 3D video cameras spoken about over a year ago with and by James Cameron.

“They were going to be 6.5-100mm zoom lenses, which would allow us to set them both to the same focal length for capturing stereo images. … We’re going to get some great mosaics with the focal lengths we’ve got, but we’re not going to get the wide-field cinematic moments or the 3D movies from Mars that Cameron wanted” – Ravine

Stay tuned as the Mars mission continues through the coming weeks and into the vast future of space! Check out our timeline below as well to keep up to date on all of Curiosity’s doings, drivings, and photography too!