Military Humvees with lasers capable of shooting down drones should be ready for field-testing by 2016, preparing for a new age of warfare where unmanned, remotely-controlled weapons platforms attack from the skies. The Ground-Based Air Defense Directed Energy On-the-Move program (GBAD) aims to equip US Marines with highly portable anti-drone weapon systems, significantly miniaturized versus the lasers the US Navy will test on battleships later this year.

The goal is a truck-mounted laser capable of at least 25kW output, with the likely power to be 30kW when the Office of Naval Research begins trials in a couple of years time. Its prediction is a rise in UAVs being used for covert surveillance and reconnaissance, or even drones that can launch their own unmanned offensive on ground-based troops.

It’s not the first time we’ve seen attempts at portable lasers, though the bulk generally involved has limited their availability. Back in 2009, Boeing modified one of its Laser Avenger systems and mounted it on a Humvee – shown above – demonstrating how it could acquire and track three small UAVs in front of a complex background of mountains and desert.

The Boeing laser also shot down one of the UAVs, from what the company described as an “operationally relevant range.” 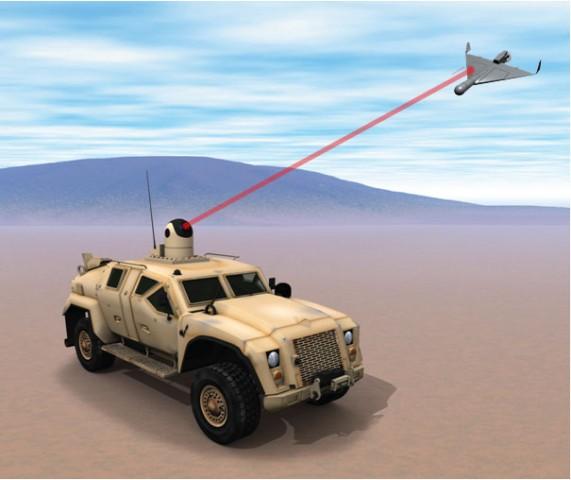 Now, attention turns to making such systems practical, with the ONR awarding contracts to partners developing production versions of the technology. In addition to the core laser, that also means elements like the beam director, batteries to power it, along with radar, communications, and command and control.

“We’re confident we can bring together all of these pieces in a package that’s small enough to be carried on light tactical vehicles and powerful enough to counter these threats,” Brig. Gen. Kevin Killea, vice chief of naval research and commanding general at the Marine Corps Warfighting Laboratory, said of the scheme.

One such private sector partner is Raytheon, which will be supplying the laser for the weapon. Its planar waveguide (PWG) laser technology promises better efficiency and less beam scattering than other approaches, in a form-factor the size and shape of a 12-inch ruler.

Among the advantages of lasers rather than more traditional ordinance is that they’re difficult, if not impossible, to track when used covertly. That would mean ground forces could neutralize drones without necessarily giving away their own position.