Apple finally gave ambitious road-warriors with excellent vision the Retina MacBook Pro they’d been demanding, a 13-inch model to join the existing 15-inch Pro at the pinnacle of the company’s mobile range. Promising the same eye-watering visuals with the sort of processing power the Pro line-up is known for, the 13-inch version also makes some concessions so as to slim down to suit more frequent travelers. Is this the perfect notebook for your bag? Read on for our full review.

Side by side, the two Retina-class notebooks are almost identical in their thickness. The 13-inch model is actually slightly thicker – we’re talking a millimeter’s difference, mind – but the disparity in weight (3.57 pounds versus 4.46 pounds), width (12.35 inches versus 14.14 inches), and depth (8.62 inches versus 9.73 inches) are the most noticeable changes. If the original Retina MacBook Pro is a long, thin slice of computer, then the smaller model is a tiny powerhouse that can easily be dropped into a bag without demanding the sort of performance compromise of, say, a MacBook Air. Next to the old-style 13-inch, meanwhile, the differences are considerably more obvious. The new Retina model is thinner, lighter, narrower, and even less deep.

Still, there are some compromises to be made for reducing bulk (and for starting $500 less) from the 15-inch Retina Pro. The 13-inch MacBook Pro with Retina loses the discrete graphics option of its 15-inch sibling, making do with Intel HD Graphics 4000, though you can still power two external displays – via a combination of the two Thunderbolt ports and the single HDMI – and run the notebook’s own display simultaneously.

All the ports, wireless connectivity, and 720p webcam are the same as we saw on the 15-inch, as is the backlit keyboard and sizable trackpad. That means you get a pair of Thunderbolt connectors (which can double as Mini DisplayPort), two USB 3.0, a headphone jack, SDXC memory card slot, and an HDMI output. Inside there’s WiFi a/b/g/n and Bluetooth 4.0, and a pair of microphones are on the left edge. 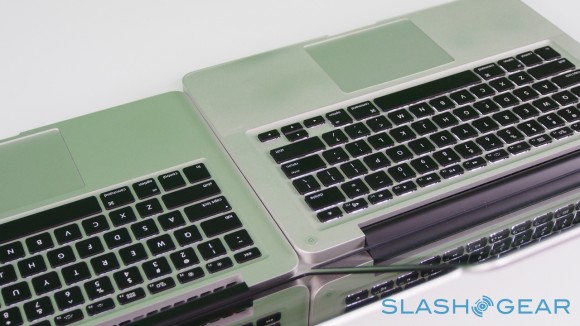 Apple’s industrial design continues its gradual evolution toward thinner, pared-back computing, and the new MacBook Pro is no different. From the side, it’s like the old model but flatter; you can also glimpse the new “side gill” vents which are part of the reworked cooling system. In use, it’s quiet, with the fans only rising to a concentrated hum during the heavier moments of our benchmarking. The compromise to be made is one of repairability and room for improvement: the memory is soldered to the logic board, so as to shave away bulk, as is the processor, and the flash storage uses a proprietary connector so it’s sensible to buy the biggest drive you can afford initially.

The 13-inch MacBook Pro Retina display is, at 2560 x 1600, slightly lower than the 2880 x 1800 of the 15-inch, but because of the smaller size its pixel density is even higher: 227 ppi compared to 220 ppi. With both in front of you, though, you don’t see any difference – the whole point, after all, is that the pixels aren’t supposed to be individually identifiable – only the mesmerizing detail and smoothness of the graphics that leave other notebook displays, no matter how bright or colorful, looking crunchy and jagged. Viewing angles are broad enough that you might have to worry about those next to you on the plane glancing over and seeing what you’re working on. 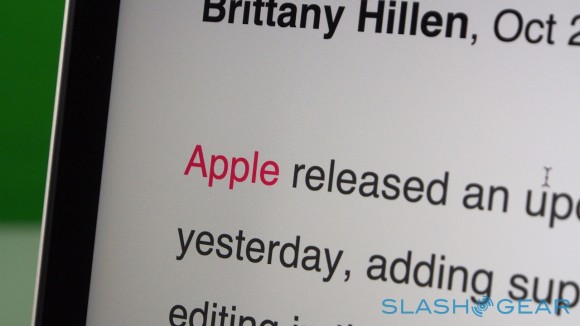 As before true Retina mode on the MacBook Pro doesn’t actually give you 2560 x 1600 resolution. Instead, you get a simulated lower resolution which is smoother all round, since each pixel is in fact a cluster of smaller pixels.Yyou can optionally switch out of Retina mode and pick a higher effective resolution, though the 13-inch misses out on the 1920 x 1200 of the larger machine; instead, the maximum is 1680 x 1050, still impressive (and impressively detailed) for a relatively small notebook. Third party applications are available which will force the display resolution even higher, though are not officially supported by Apple.

Apple is quoting a 75-percent reduction in glare from its new Retina display, versus the previous MacBook Pro 13. In practice, there’s certainly fewer reflections, which adds up to more flexibility in where you can use the notebook. It’s not a true matte finish, mind, though by ramping up the brightness you can use it outdoors and still see what’s going on.

We started with Geekbench, a synthetic test of processor and memory performance. The Core i5 machine scored 6507 overall, while the Core i7 pushed that to 8238. It’s worth noting that the increases weren’t solely in the processor categories: the Core i7 model also recorded better memory scores, suggesting that it makes better use of the 8GB it has. Still, each is a fair step behind the 15-inch Retina model, which scored 12,970 with its 2.6GHz quadcore Core i7-3720QM and 8GB of memory. Performance was roughly on a par with the mid-2012 13-inch MacBook Air. 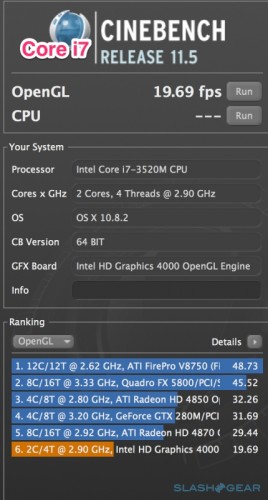 We then turned to Cinebench, which benchmarks processor and graphics performance with a mixture of 3D rendering and OpenGL testing. It’s a good way of examining how a system will handle intensive tasks such as video processing, or gaming.

The Core i5 model scored 2.12 CPU points, while the Core i7 scored 2.81 CPU points, or roughly half the result you’d expect from a quadcore processor. Unsurprisingly, with no discrete GPU, graphics performance showed the biggest hit, with the Core i5 managing 14.81fps and the Core i7 squeezing out 19.69fps.

By way of comparison, the 15-inch MacBook Pro with Retina’s NVIDIA GeForce GT 650M GPU saw it record a score of 34.30fps in the same category. The MacBook Air managed 16.41fps.

If you’re planning use your new Mac for serious graphics or video editing, our suggestion would be to stick to the larger Pro, as the standalone GPU pays dividends. Of course, it also requires more power, though it includes the same Intel HD Graphics 4000 chip for more everyday use.

While the battery in the MacBook Pro 13 Retina may be smaller than before – 74-watt-hour, or versus the 95-watt-hour of the 15-inch – the fact it’s driving a smaller screen and less extreme components means Apple rates it for the same runtime: up to seven hours of wireless web browsing, or 30 days standby. However, the 60-watt MagSafe 2 power adapter is slightly smaller and thus continues the theme of the 13-inch MacBook Pro with Retina being easier to transport.

In practice, with a mixture of web browsing over WiFi, some music playback, a couple of YouTube videos and some emailing, and the display set to a usable half brightness, the Pro lasted just over six hours. Scaling that back to solely browsing and we broke past Apple’s seven hour estimate by a couple of minutes. In contrast, a more ambitious use of the notebook for video playback and some brief video processing in iMovie saw the battery expire in around four hours.

Increasing storage isn’t cheap – you can boost the entry-level model to 768GB, yes, but it’ll cost you more than a MacBook Air to do so – but the $200 extra for the Core i7 dualcore strikes us as a worthy upgrade given the impact it has on performance overall. Apple still offers the non-Retina 13-inch MacBook Pro, which starts at $1,199 with the same 2.5GHz Core i5 dualcore, though to specify the same memory and a 128GB SSD you’re looking at $1,499. You also get a gigabit ethernet port, FireWire, and an optical drive, though you miss out on the lighter chassis and far improved Retina display.

While the Air might be the smallest of Apple’s notebook line-up, the 13-inch Pro hits a more palatable sweet-spot for balancing power, performance, and functionality. At $1,699 and up, the 13-inch MacBook Pro with Retina display sits at the premium end of the notebook market ($500 less than the entry-level 15-inch model, mind, although you do get extra performance for that) but it does offer features that, right now, you can’t get elsewhere. Those for whom sheer power – particularly multimedia editing – is essential should probably opt for the bigger model, but those road warriors looking to pare back weight and bulk without unduly sacrificing usability will find a lot to love in the 13-inch MacBook Pro with Retina display.