So we were contacted by no less than GelaSkins themselves to see if we’d like to take a look at their brand new MacBook Air protective skins. What did we say? Of COURSE we’d like to take a peek. So they did indeed let us take a peek, and since I just happen to have had a brand new MacBook Air 11″ right here to go with my ancient iPod Touch 2nd gen, I decided to grab a skin for both. For the iPod Touch 2nd gen I decided to go with a massively complex London illustration by my favorite group of pixel illustrators in the world: eboy! Then for the MacBook Air 11-inch, I decided to take the DIY route and have them print my own design.

The design I decided upon for the MacBook Air 11″ was a photo of the army-issue backpack in which I carry all of my accessories and books to and fro. In this way it would not only be protected from scratches, but from nefarious intentioned characters as well. Why? Because if it were printed well enough, it would be totally camouflaged!

When we received the package in which the skins were mailed, we did not instantly know the contents. This is important as these skins are highly sought-after as they work on many different products, even if they aren’t sized correctly. Of course GelaSkins does suggest you use them on the products they intended them for, but weird stuff happens! 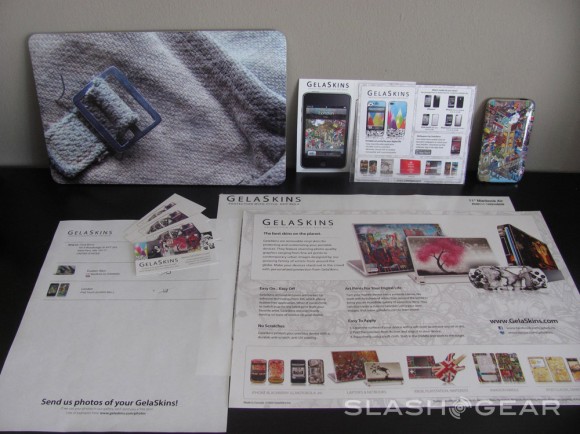 Once we we’d opened the first envelope, the excellence was instantly known. High quality plastic sleeves surround two sheets each -one of them an informational sheet, the other containing the skin. These sleeves opened just like you would a comic book sleeve. Newbs- be careful. You don’t want to wreck your comics by having them stick to the sticky part. Once you’ve got the sheets out, you can see the majestically colorful brightness of whatever printers GelaSkins is working with.

Top notch, all the way. 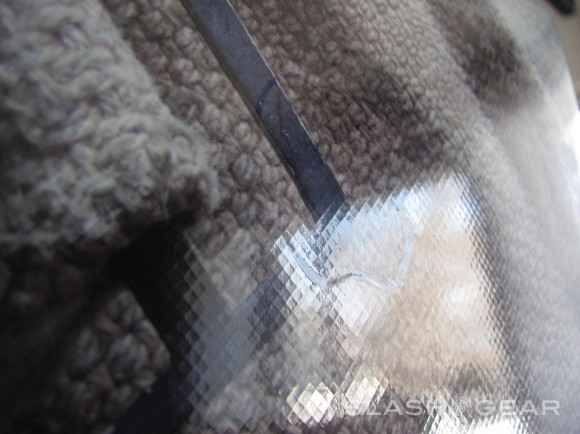 The first of two skins we unwrapped was the MacBook Air 11″. Although the top of this computer is relatively small, especially when compared to the rest of the comparable computers on the market, it seems gigantic when you peek the sticky side up from the GelaSkins backer. This protective skin is almost rubbery on the printed side, slightly less sticky than a vinyl sticker you’d put on your car on the sticky side. It’s almost like it’s between a window cling and a bumper sticker, if you know what I mean. I was able to place the skin on the computer PRECISELY after a few tries, but if you’re not a master craftsman, (taught in the fine arts of bookmaking by the Minneapolis masters,) you might want to consider working with two people – one to hold part of the sticker up, the other to place it down. The sticky side is a level of sticky that’s able to be stuck more than once, but the amount of times you can peel it up is finite (though we didn’t need more than 3 or 4 tries to get it perfect.) 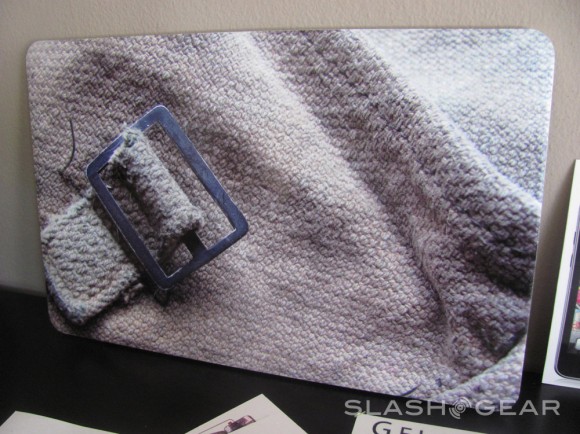 The printing on this skin is marvelous. You’ll hear me say the same thing about the iPod Touch skin because it’s a design by people who know how detailed the printers can be here, but I had no idea, and thustly submitted a high-res photograph to test the capability of the GelaSkins colors and sharpness. Completely top notch. I’ve never seen something printed so perfectly on a non-paper surface. I don’t know how they’ve done it, but they’ve done it extremely well. When placed next to the backpack from whens the photograph came, supposing it’s in the same light, they look basically identical. A little bit different in size, obviously, but identical nonetheless.

This laptop goes with me basically everywhere since it is an ultraportable and I do like to bring it along. Therefor it is witness to some medium punishment. I do have an Incase sleeve that I put it in for travel between locations, but once I’m at a place like a coffee shop or a library or on a plane, some damage is bound to happen. While I have had this skin on for over a week now, bringing this laptop with me everywhere, I cannot see a scratch and the skin has not begun to peel off in any spot whatsoever. 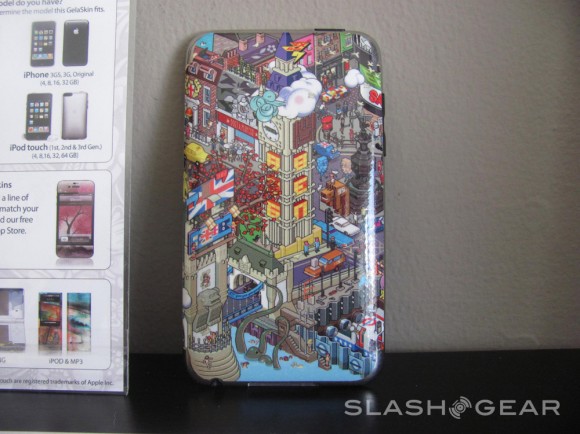 It doesn’t matter especially that this iPod Touch is a 2nd Gen rather than the newest model since the same factors in deciding if the protective skin is good go into play. Is it easy to apply? Extremely. Obviously much moreso than the laptop. Does the skin protect the back of my device? Of course it does – not a scratch in the week I’ve had it. Does the skin peel at all? Not even a little bit. Needless to say (have a peek for yourself) the printing is basically perfect. The pixel illustration group eboy have clearly positioned their illustration here (and on a bunch more skins) to work perfectly with the size of the skin, and they’ve done an excellent job. I’m more exciting to show off the skin than I am to show off the new apps I’ve purchased. 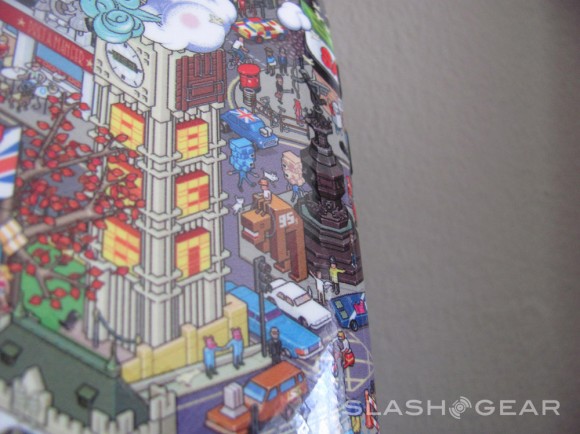 I’ve written much more than I really should have even had to – all I should have said was that these skins do exactly what they say they do, protect the surface they’re covering, and that they’re printed magnificently. You’re dealing with an absolutely professional group here (just look at the artists and designers involved for proof) and they’re making a really rocking product.

Head over to http://www.gelaskins.com/ and grab a bunch!