Will extreme lightness be enough to score a win for ultrabooks? That’s the strategy Mouse Computer is taking with the LuvBook X, using a carbon-fiber chassis to dip under the 1kg mark despite. One of the relatively rare 11.6-inch models, it runs Sandy Bridge rather than newer Ivy Bridge processors but, as PC Watch discovered, doesn’t necessarily suffer in terms of performance.

Mouse Computer reckons users will see up to 5.5hrs of runtime out of the battery, but since the unit is sealed up there’s no replacing it. You also lack a backlit keyboard, unlike the current-gen MacBook Air – with which the LuvBook X is shown back-to-back in the image below – but you do get 985g weight which undercuts the Air by 95g.

Pricing is expected to come in at 89,800 yen ($1,110) when the LuvBook X goes on sale in Japan, for the Core i5 model, though international availability is unlikely to be on the roadmap. Considering Ivy Bridge for ultrabooks is fast approaching, that’s perhaps not necessarily a bad thing; we’ll happily wait for the second-gen version with updated chips for a little extra CPU and GPU grunt. 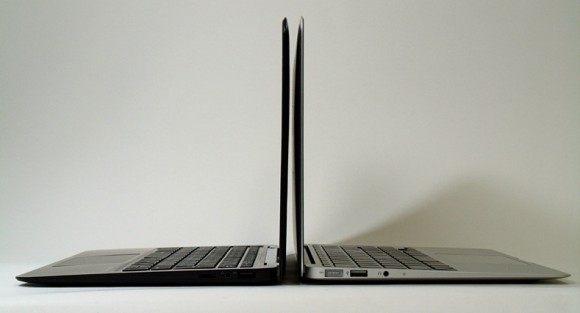