Today we’re having our first look at the Microsoft Lumia 950 on the review bench, showing you just one – perhaps the most compelling – feature of the bunch: Continuum. When Microsoft first created Windows Phone, it wasn’t any secret that they wanted the software to look and feel like a mobile version of what was on the way for their desktop operating system. Almost as if desktop begat mobile. Now, several years down the line, Microsoft attempts to tie the two together implicitly with a feature called Continuum.

In Continuum you have the ability to connect your Lumia 950 to a monitor which, using a tiny metal box as an intermediary, allows you to have a desktop interface powered by your mobile device. The idea is certainly compelling. What better way to carry your work around with you than to literally carry your work around with you, making it big or small whenever you need to?

Our first impressions with the Lumia 950 weren’t all that unlike the last several Lumia smartphones – going back to before the smartphone line was owned by Microsoft, made instead by Nokia. Now its all Microsoft’s business, and it’s clear: they want you to focus on Windows 10 software and Microsoft-made hardware. 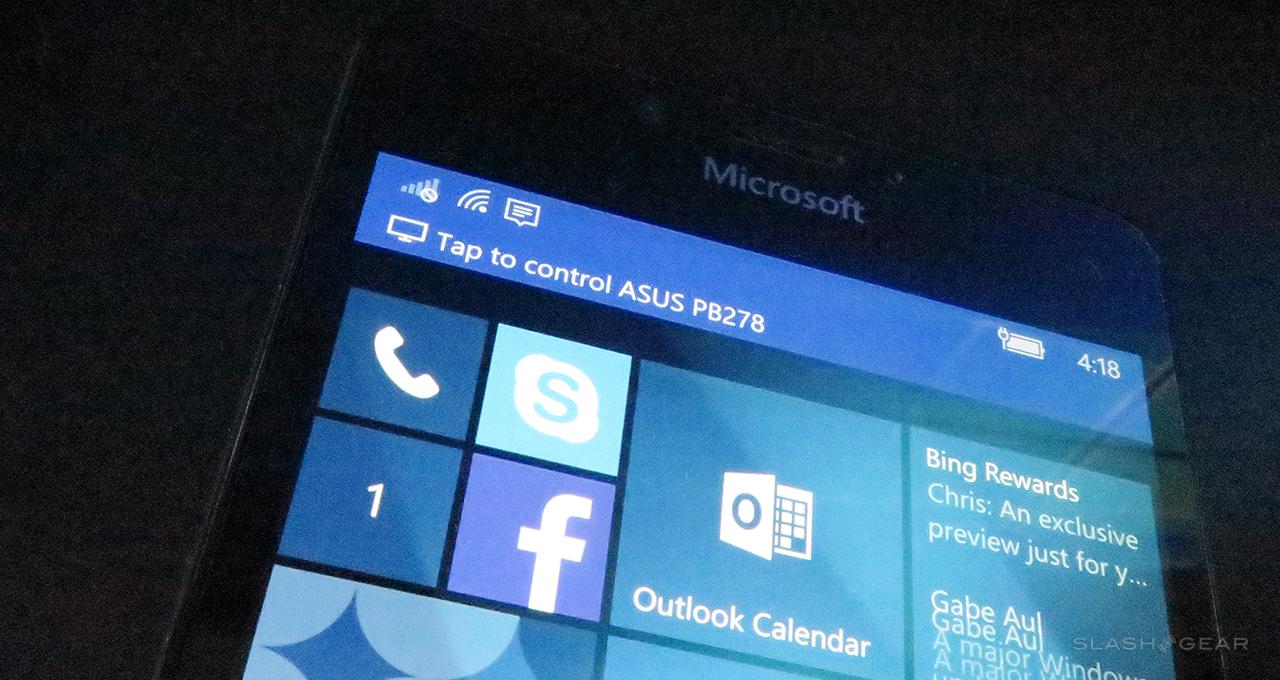 When I use this Lumia 950, I feel like I’m working with a derivative of the Windows operating system for desktop machines.

The very first commercials for Windows Phone played at the idea that Microsoft was creating a smartphone OS that would get you in and back out as fast as possible. You’d see a text message, for example, respond to it, and go back to your day. 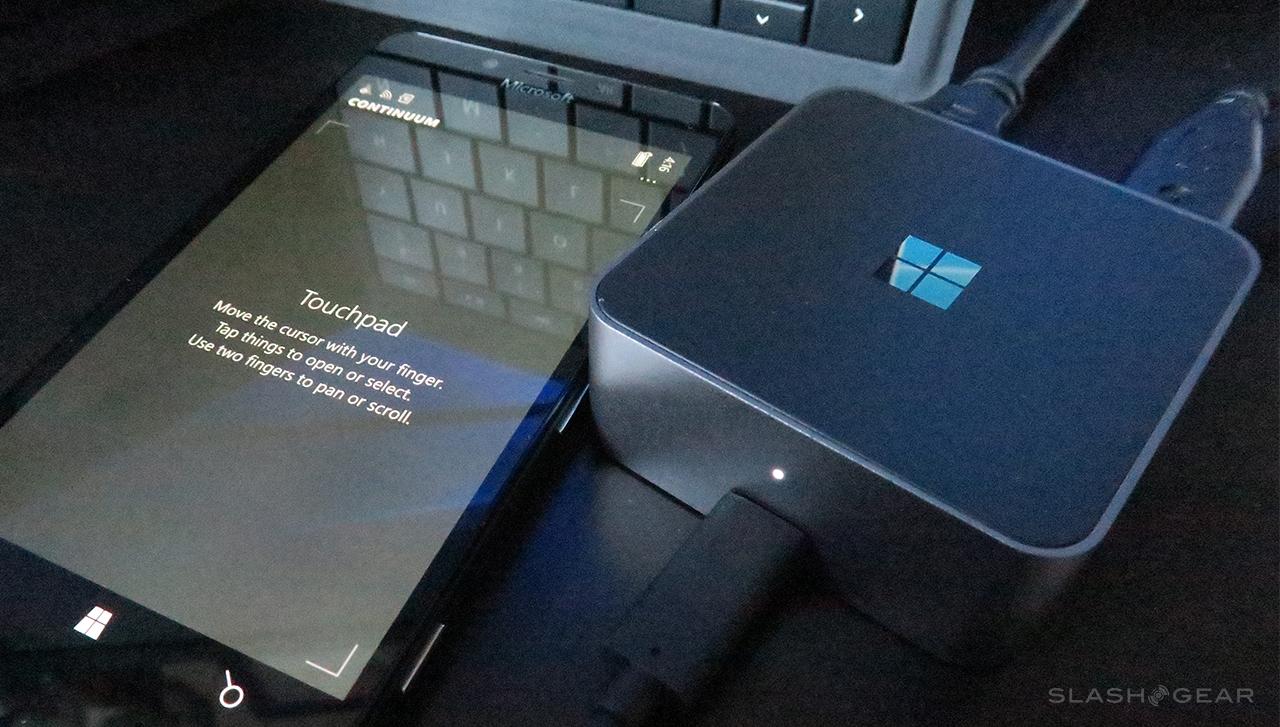 I still get a sense of that here at the tail end of 2015 – I feel like the operating system wants me to do my business and get out. I think it’s the big boxes and the relative lack of negative space in the app store that does it.

With Continuum, I get more of a sense that Microsoft is opening up – asking you to continue to use the phone even when you’re not taking a phone call or answering an email. 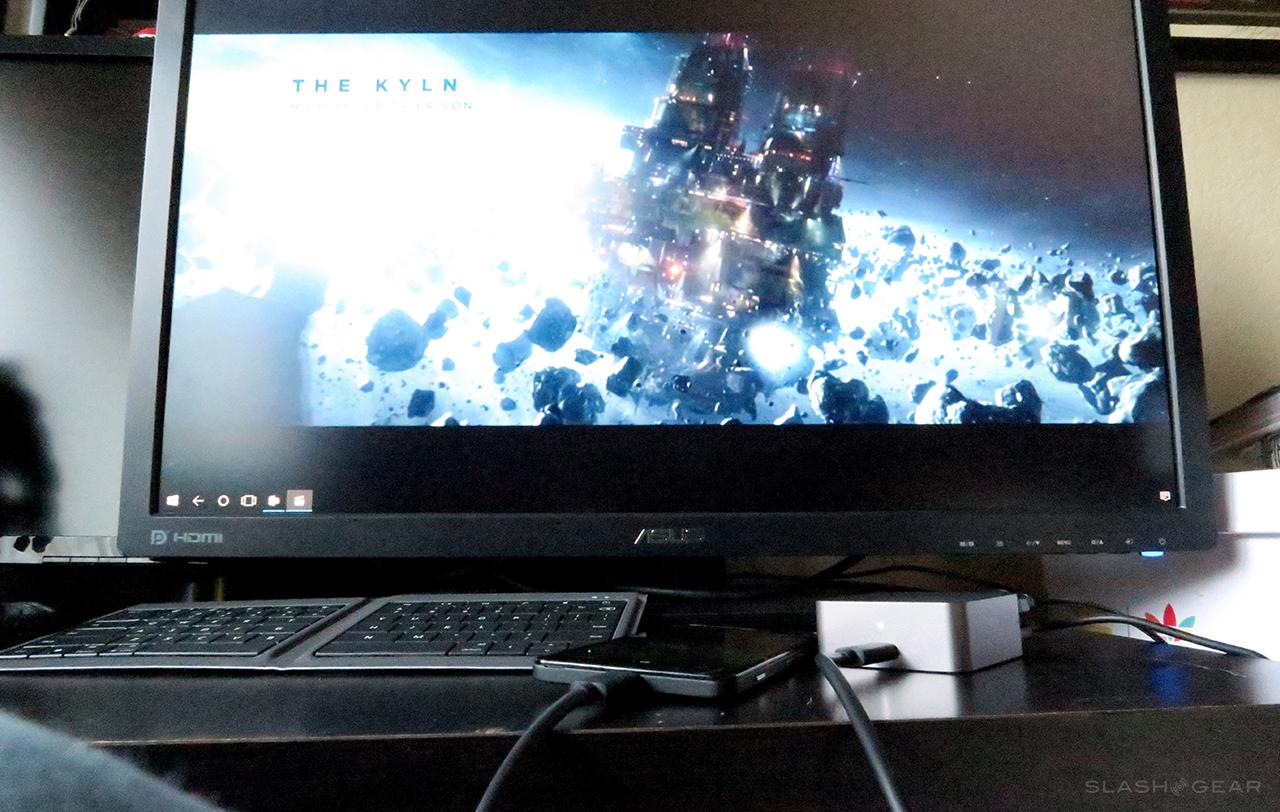 When you plug your device in to the Microsoft Display Dock, your phone takes a few moments to adjust to the newly plugged-in display, you’re asked to adjust your display (if needed), and you’re ready to go. The phone can then be used as a touchpad, and you’ll want to connect any peripherals you have to the Display Dock’s 2x USB 2.0 ports – keyboard and mouse, for example.

Once you’re plugged in, you have access to some of your apps. You’ll likely use this system to type up documents, access your web browser, and watch movies, most of the time. At the moment there’s not one whole heck of a lot else you can do, really – but if the system does indeed take off, we’ll be excited to see what’s possible. 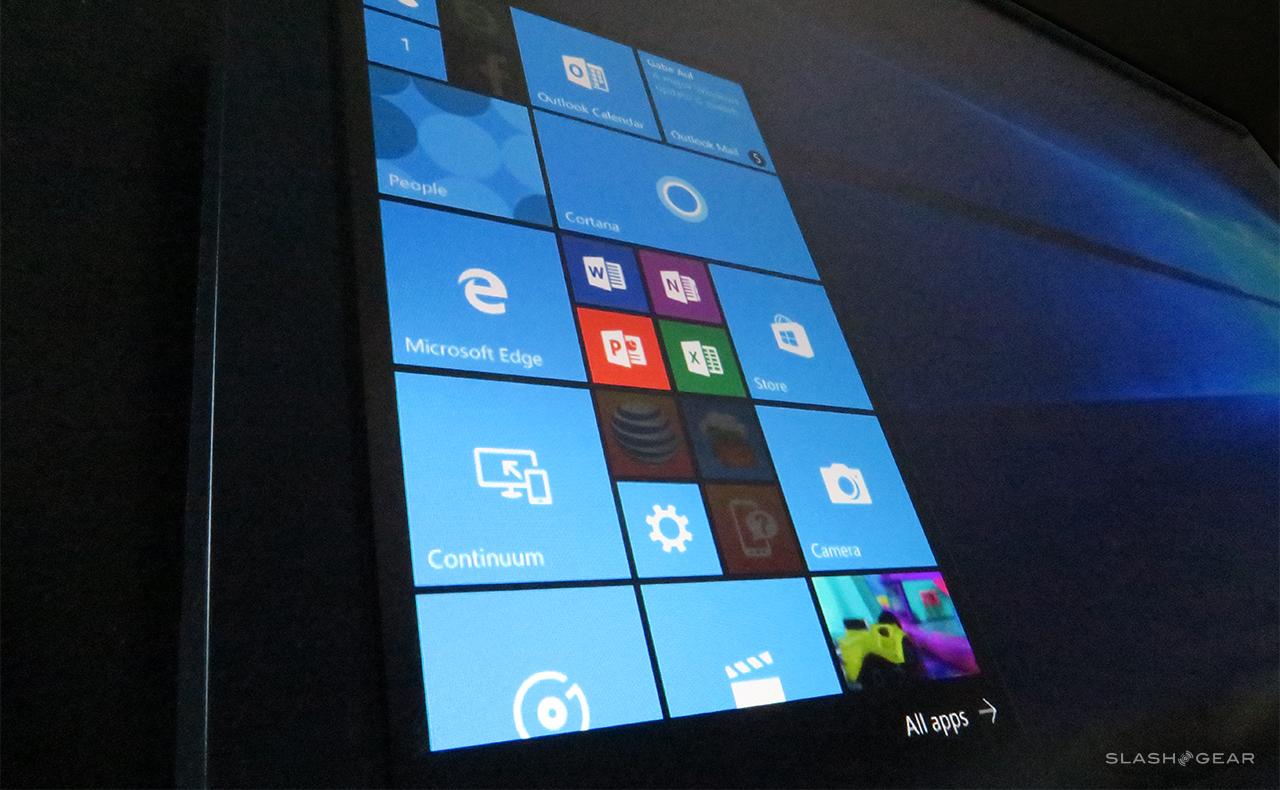 For now, load times between apps, mouse movements, and display quality are just a bit slower than they are on the smartphone alone, but only a little. You get the sense that you’re not really working with a full-powered PC, but that you’re not just running a desktop-looking OS from a phone. Somewhere closer to the good end of the spectrum. We’re hoping for some increased resolution and quickness of processing in the near future. 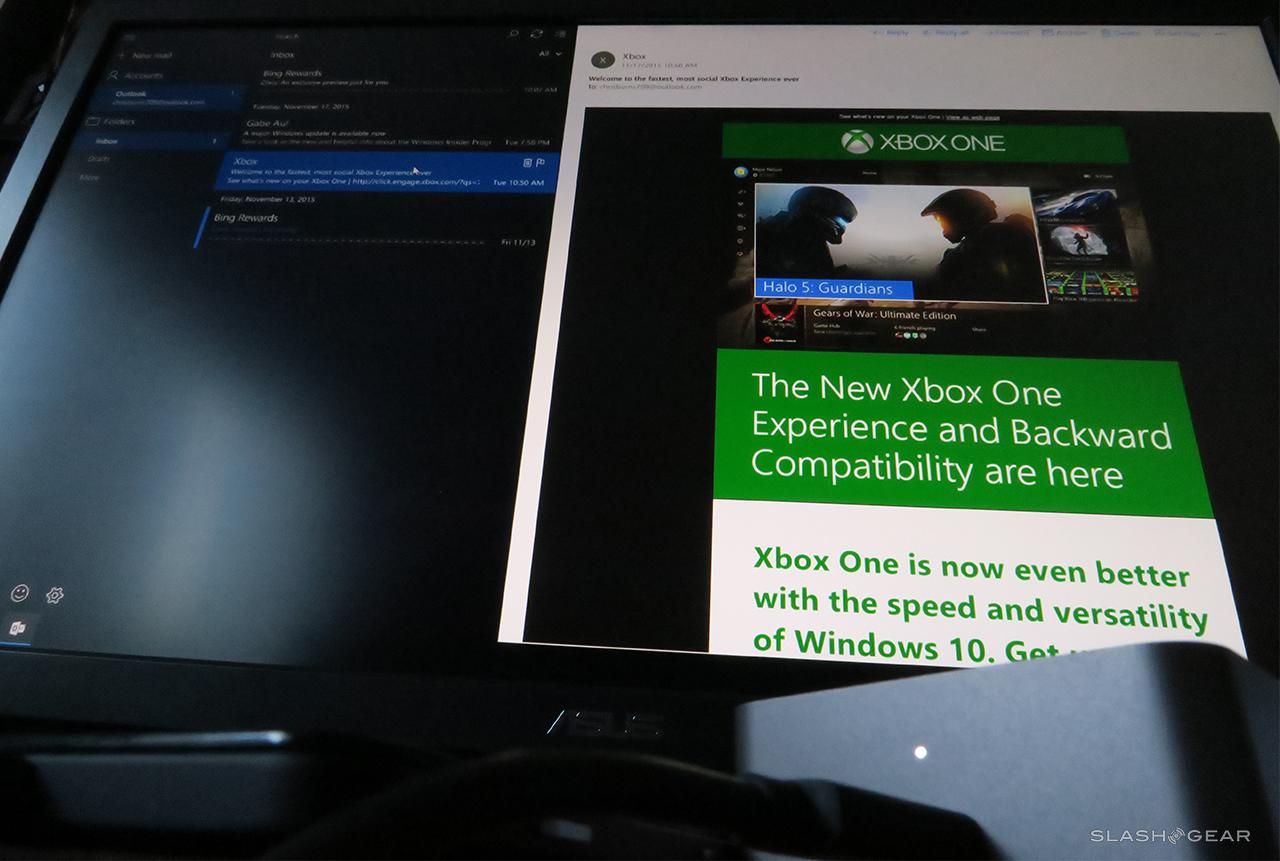 NOTE: You can also use Continuum with Miracast-enabled devices connected to your monitor. This means it’ll be a wireless experience – and just a little bit more laggy as a result.

If what we’re seeing so far is just the beginning – and it is – Microsoft is heading in a really, really awesome direction. Now they just need to make the phone more fun to use on its own – and feel like more than a side project for the real money-maker: Windows 10 everywhere else. 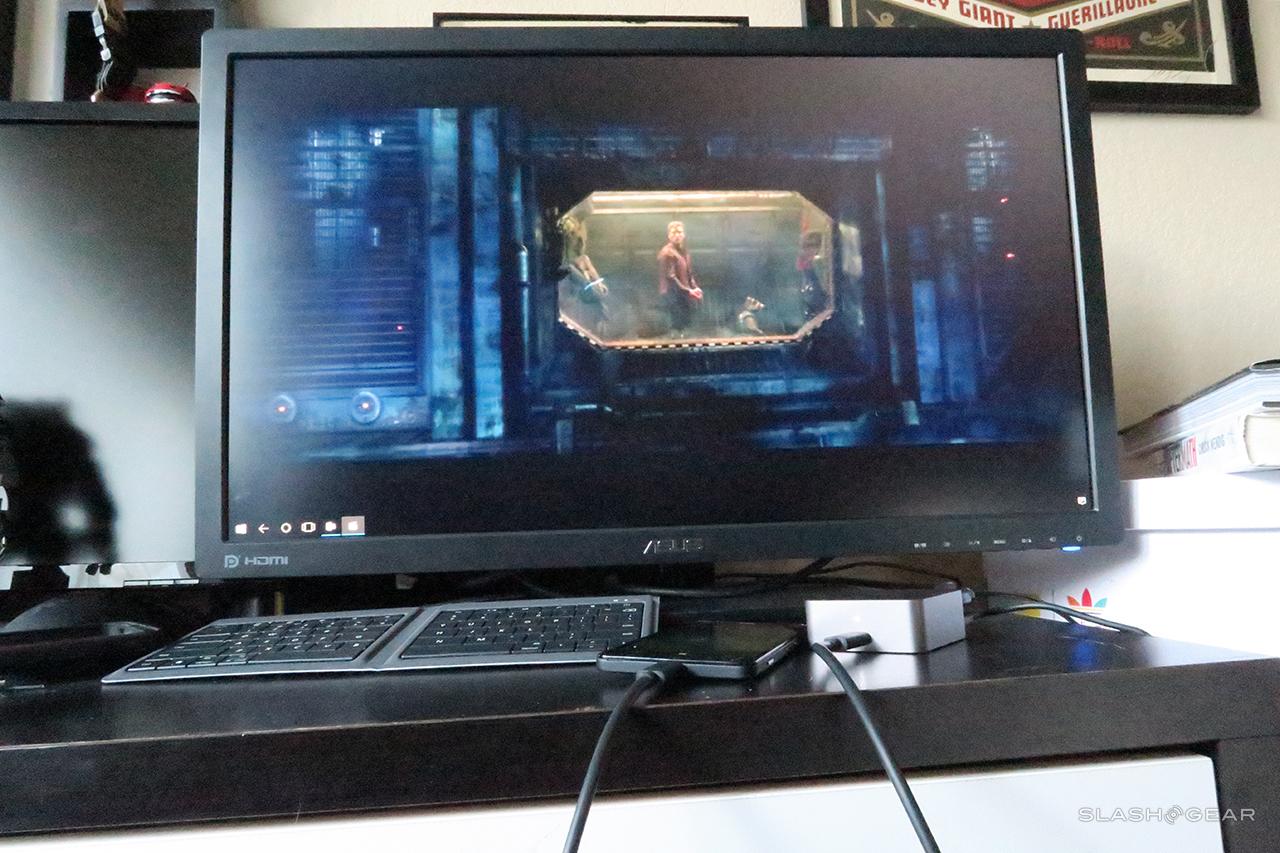 This is just one of a set of reviews we’re doing with Microsoft’s Windows 10 for smartphones and the Lumia 950. Stick around our Windows 10 tag portal for more!