Logitech have finally officially announced the Squeezebox Touch, first tipped back in June, along with the Squeezebox Radio, a new portable media streamer with a full-color display.  Both link into the company’s Squeezebox streaming music system, as well as offering support for internet-based services such as Pandora. 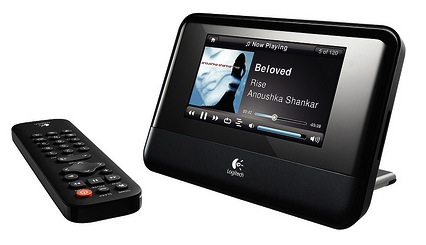 The Touch has a 4.3-inch touchscreen and WiFi b/g, and offers sampling rates of up to 24 bits at 96 kHz for use with an existing speaker system.  Meanwhile the Radio has its amplification and speakers built-in, together with an optional rechargeable battery.

Each also has a new App Gallery system, which allows you to share your now-playing track information on Facebook, together with funnel images from Flickr down onto the mediaplayers’ displays.  The Logitech Squeezebox Touch will arrive in December for $299, while the Squeezebox Radio will go on sale by the end of the month for $199.