Logitech G502 Lightspeed review: A pricey gaming mouse, but a good one

Over the past couple of years, Logitech has delivered a string of quality G-series releases, particularly when it comes to mice. Recently, the company has started to turn its attention toward its more popular models from the past, updating them with wireless sensors and Lightspeed support to turn them into wireless gaming mice for the modern era. First we saw Logitech give the G Pro a wireless makeover, and now it’s the G502’s turn.

The G502 has been one of Logitech’s most successful mice throughout the years, and because of that, it’s enjoyed a few different upgrades. Last year we saw Logitech outfit the G502 with its HERO sensor, but that version kept the cord and, by extension, kept you tethered to your PC.

Given the G502’s popularity among gamers, it was only a matter of time before we saw a version that supported both Lightspeed and Powerplay, two of Logitech’s wireless technologies. How does the finished product perform? If you’ve used any of Logitech’s Lightspeed mice in recent years, you can probably already guess.

First, a small confession before we dig in: I’ve never actually used the G502 before receiving the Lightspeed model. It’s one of those mice that I often saw mentioned whenever someone was looking for recommendations online, but up until this point, I’ve never used one myself. The status behind the G502, then, isn’t exactly something I’m familiar with first-hand. 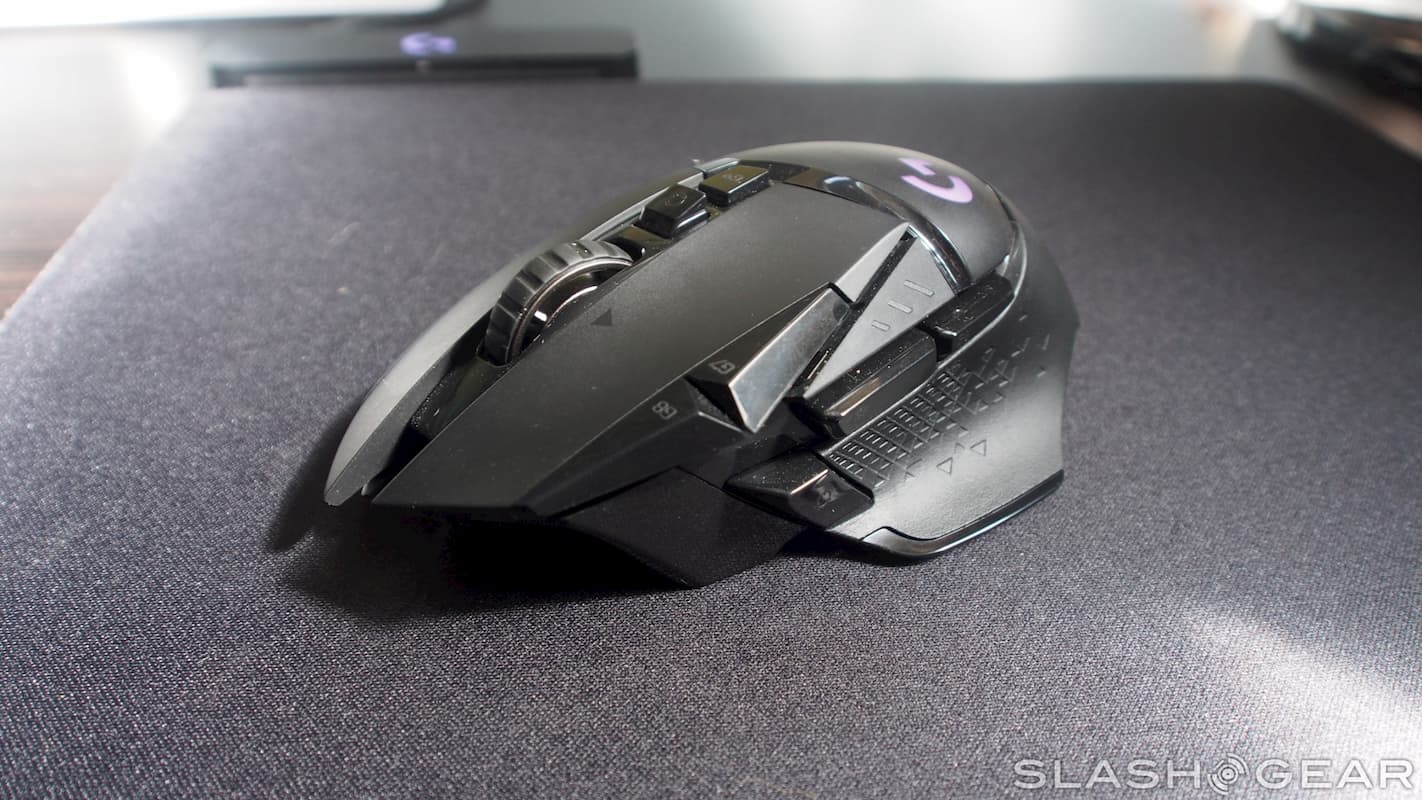 With that being said, it was immediately clear why people seem to think so highly of the G502. From an aesthetic standpoint, the G502 Lightspeed looks more or less the same as the G502 HERO and its predecessor the G502 Proteus Spectrum. There aren’t a ton of differences to be found between all three mice, except for some branding on the bottom.

I’ve reviewed a number of Logitech G Lightspeed mice now, and to me at least, the G502 feels the best out of all of them. That might have something to do with the fact that it’s a right-handed mouse – a fair number of Lightspeed mice are ambidextrous in their design, and while that’s certainly a nice touch for our left-handed brothers and sisters, it can prevent a primary focus on comfort. 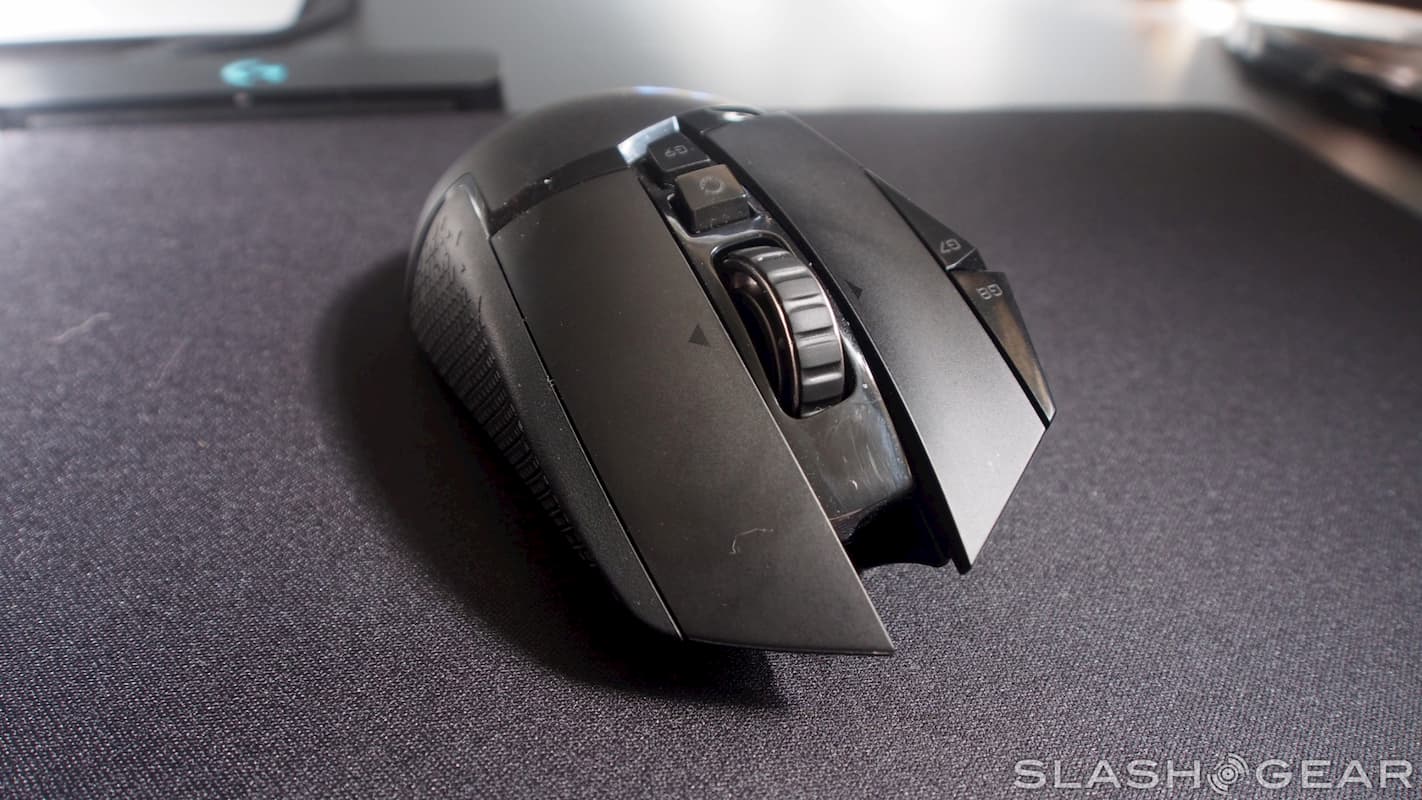 The G502 certainly looks more like a gaming mouse than some of the other Lightspeed mice out there, save for maybe the G903. It has a very sharp, almost polygonal look to it, with buttons jutting out of the sides, a little wing at the bottom that serves as a thumb rest, and of course, two main mouse buttons that each end in a point and look like a pair of fangs or claws. The G502 certainly isn’t discreet in its design, but on the other side of that coin, it’s nowhere near as outrageous as some other gaming mice are.

In all, there are 11 different buttons on the G502. We’ve got the aforementioned right and left main buttons and a scroll wheel that can act as a button by pushing down, to the left, or to the right. There are forward and back buttons positioned just above where your thumb sits, and a sniper toggle that drops your DPI to 400 when you hold it.

For changing your DPI settings in all other circumstances, you’ll use the two buttons next to the main mouse button. Then, there are two buttons in the center – one that lights up a trio of bars on the left side of the mouse as a battery readout, and one to change the wheel between free scrolling and notched scrolling modes. 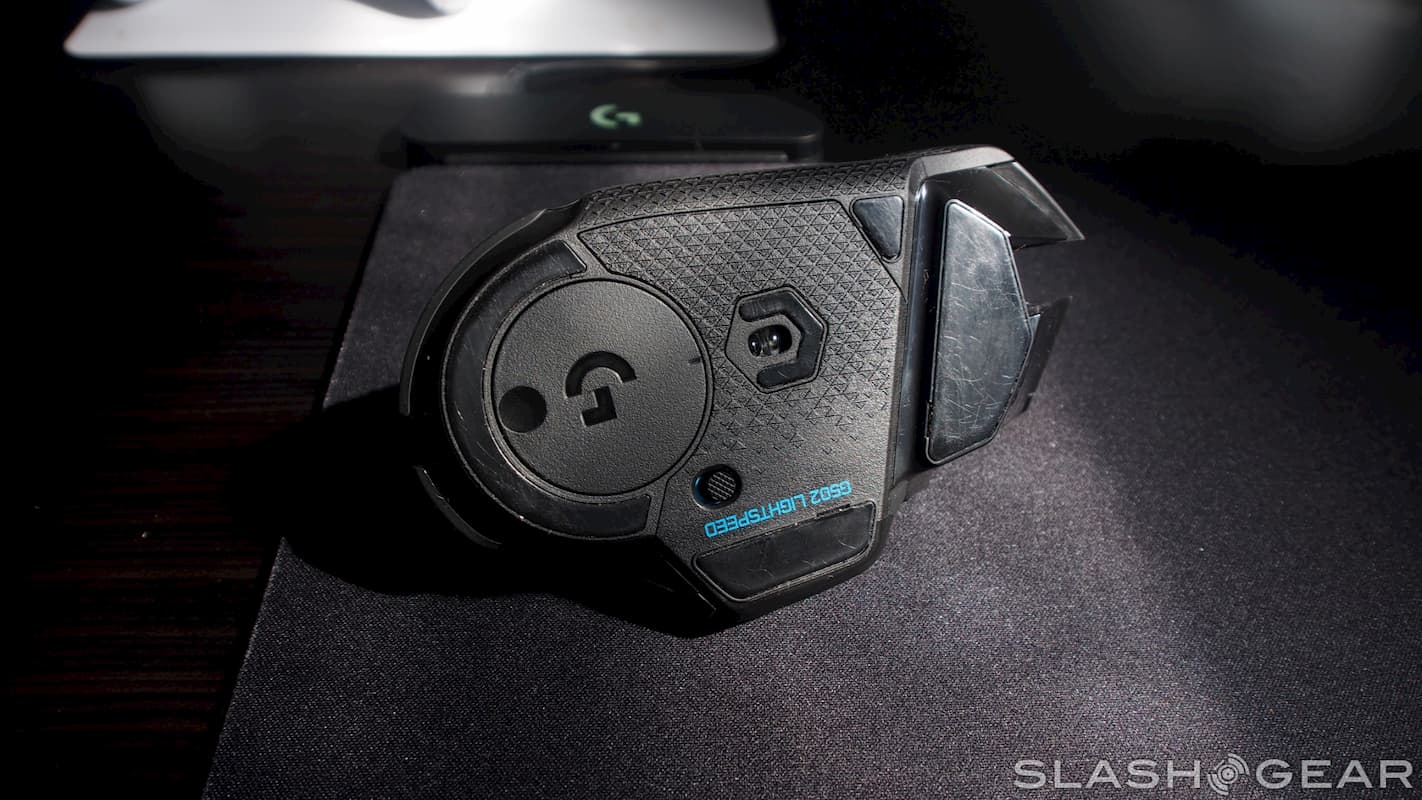 I’d like to take a moment to point out that the free scrolling mode feels super smooth. I hate using the I word “silky” to describe things like this, but it’s silky. It feels really good, it’s just a shame that I’m not going to use the free scrolling mode more often because I definitely prefer the more precise control of notched mode.

In any case, most of these buttons can be customized within G Hub, which can also be used to set macros and customize what few RGB lights are on this mouse. Though we expect Logitech to use RGB lighting to some degree in most of its G-series products, it’s usually never too much, at least as far as the mice are concerned. Here, the only thing that’s illuminated is the “G” logo, though again, there are also those three bars along the left side of the mouse that light up whenever you check the battery or change your DPI settings. 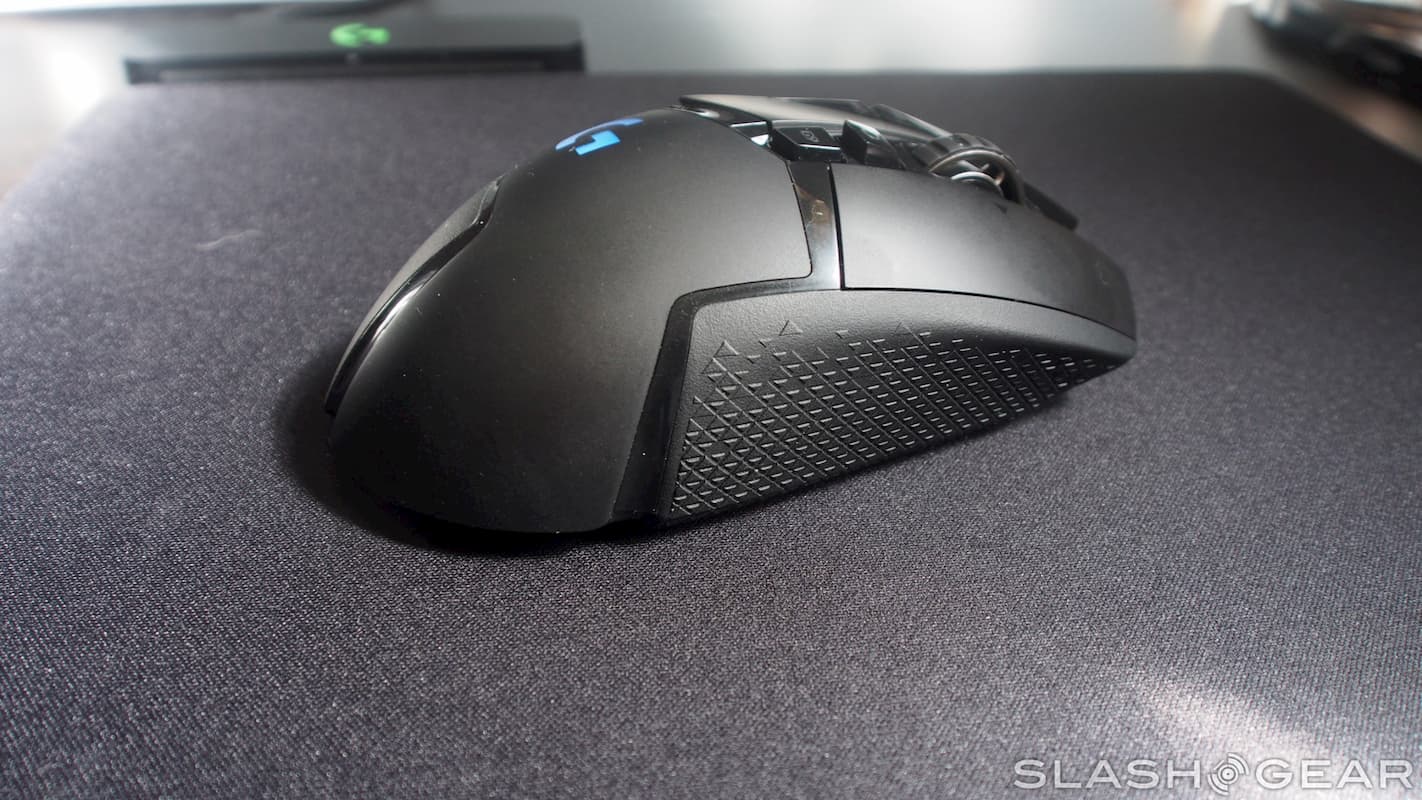 There are no buttons on the right side of the mouse, but there is that distinctive, textured rubber grip that the G502 is known for. It feels great, but I don’t know how much it actually helps during some good old-fashioned high intensity gaming. I can’t imagine it’s hindering my ability to perform in the games I play, but when my performance in any game is typically below average at best, it’s hard to blame anything on the hardware with a clear conscience.

So, the G502 looks great and feels good in the hand. That was already common knowledge going into this release, so how does it perform? In short, it performs like most of the other Lightspeed mice in the Logitech G line: Very well. It’s a relatively lightweight mouse – in fact, it’s lighter than its predecessor by 7 grams, even with the addition of all this wireless technology.

That reduction in weight is thanks to Logitech’s endoskeleton design within the mouse, which has featured in pretty much every modern mouse from the company. If you find it’s too light, you can make the mouse heavier by using the four included 2 gram weights or two 4 gram weights. 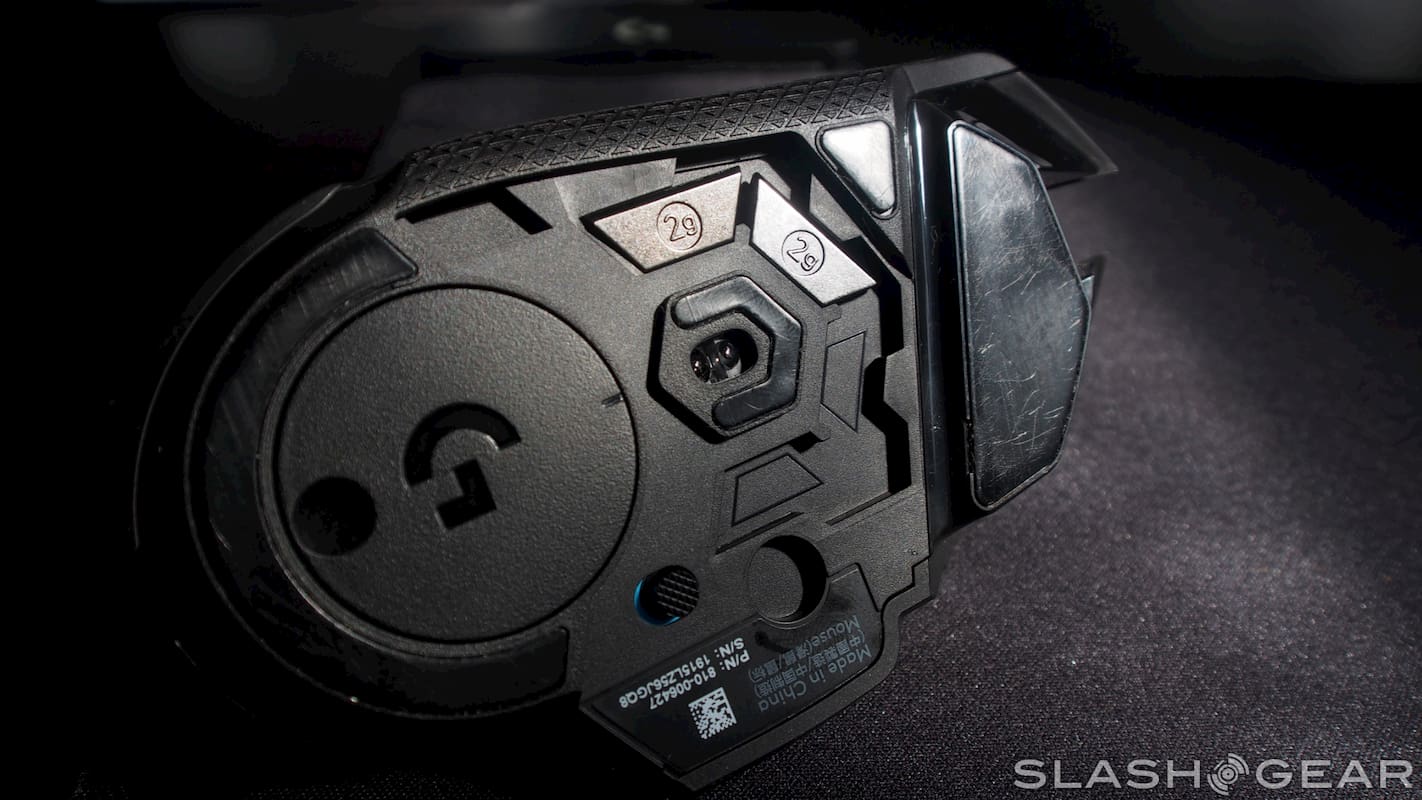 I have no qualms with the way the G502 Lightspeed performs, and in fact, I’d go as far to say that it’s a joy to use. The G502 is outfitted with the second-generation Hero 16K sensor that made its debut in the G Pro Wireless, and the benefits of Lightspeed are great, with its 1ms report times and low latency. Keep in mind, of course, that latency will still be present in any wireless mouse, but I think for the average gamer, using the G502 wirelessly will be almost indistinguishable from using a wired mouse.

When I first encountered Lightspeed, I said it made a very good argument for going wireless, and I still believe that. The benefits of Lightspeed are compounded by the presence of Powerplay, which is Logitech’s wireless charging mousepad.

With this, you can use the G502 wirelessly all the time, as the mat trickle charges your mouse whenever it’s placed on it. It’s a great system, assuming you can afford both the mat and a Powerplay-compatible mousepad.

READ MORE: Logitech Powerplay ReviewTherein lies the only problem I have with Logitech’s top-of-the-line wireless mice, including the G502: price. As great as it may be to have a Powerplay pad and a mouse to go along with it (and it is great), it’s expensive to get to that point. The Powerplay pad costs $100 on its own, and then the G502 costs a further $150, for a grand total of $250 if you want to take advantage of everything the G502 has to offer.

Granted, Powerplay has been around for a while now, which means that some probably already have the mouse pad and simply need to pick up the G502, making everything a little more palatable. If you’re just starting out, though, there’s no getting around the fact that you’ll be dropping a lot of money to get completely outfitted.

Do I think Powerplay is great? Yes. Is the G502 Lightspeed great? Yes, without question. Are they worth $250? That’s up to you. If you’ve got the money for both and you don’t mind spending it, I don’t think you’ll be disappointed. It’s worth pointing out that you can use the G502 without the Powerplay mat and still get the benefits of Lightspeed thanks to the wireless USB adapter that comes packed with the mouse, so you can cut out a rather expensive accessory and still get most of the benefit. 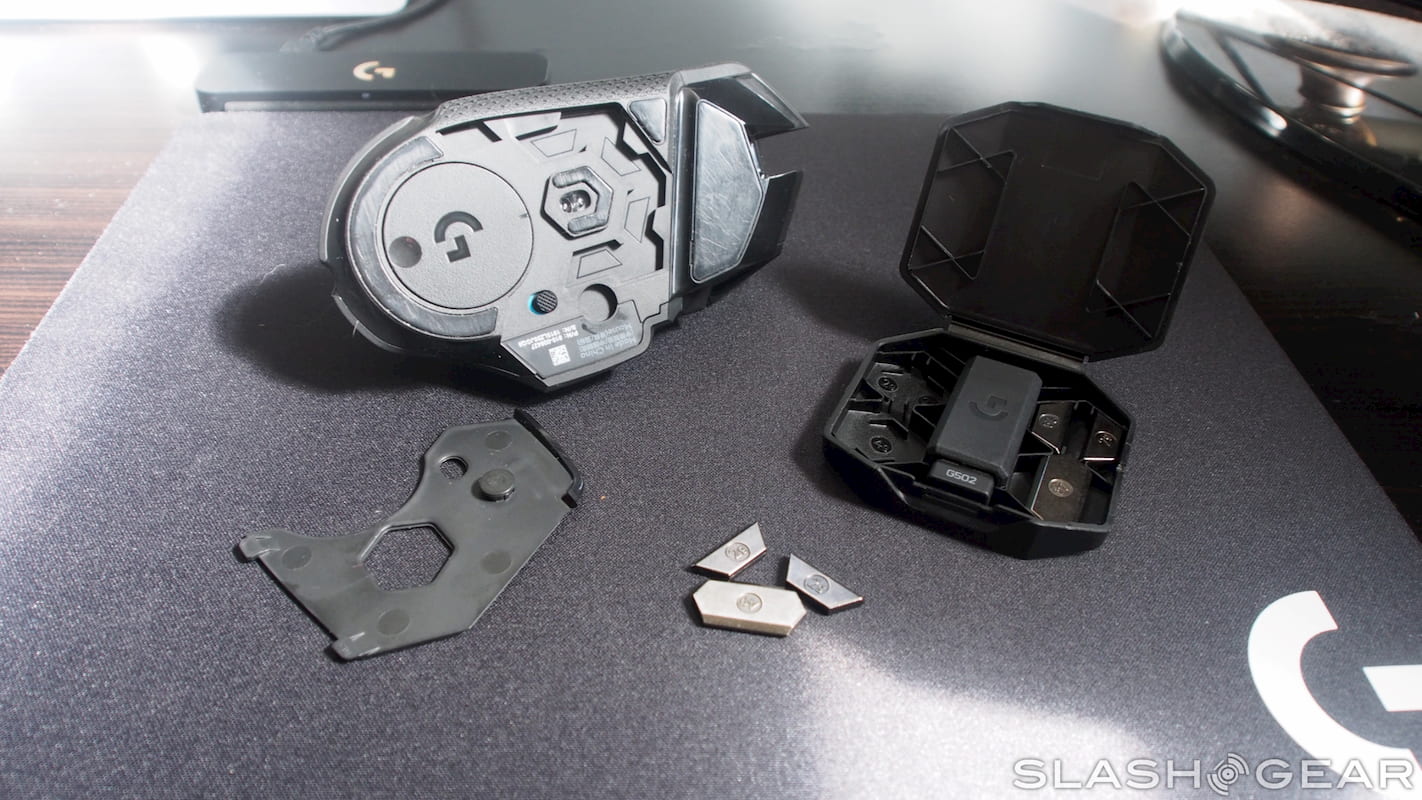 Ultimately, I’d recommend the G502 and the Powerplay mat to anyone for whom price isn’t a limiting factor. It’s an absolutely stellar mouse in pretty much every way, and knowing how nice it is to never have to charge a wireless mouse (along with the fact that Lightspeed functionality is baked into the mousepad itself, which means no need for the wireless adapter), I’d be comfortable spending this much on the whole kit – though maybe over time instead of all at once. That isn’t true for everyone though, so regardless of how good this mouse is, it all comes down to whether or not you can afford it.