Wireless mice have a certain unsavory reputation among PC gamers. Though many will tell you that the latency associated with wireless accessories make wired ones better, that doesn’t usually come into play unless you happen to be so good at the game you’re playing that adding 10 or 20 nanoseconds to your reaction time is the difference between winning and losing. No, for most of us, the reason to stay away from wireless accessories is one of convenience: It’s decidedly not fun to have a mouse or a keyboard die on you when you’re in the middle of a game, so it’s just easier to opt for wired peripherals.

Logitech thinks it has an answer to that problem with its new Powerplay series of gaming accessories. The hope is that it can sell you on the idea of wireless mice by making sure that you never need to worry about charging them in the first place. It’s taken four years for Logitech to get the technology behind Powerplay right, and it’s safe to say that the company’s efforts weren’t wasted.

In all, Logitech sent me three products to review: two mice, the G703 and the G903, and the Powerplay mousepad, which is compatible with both. Before I dive into the review of these devices, let me quickly explain how they work. 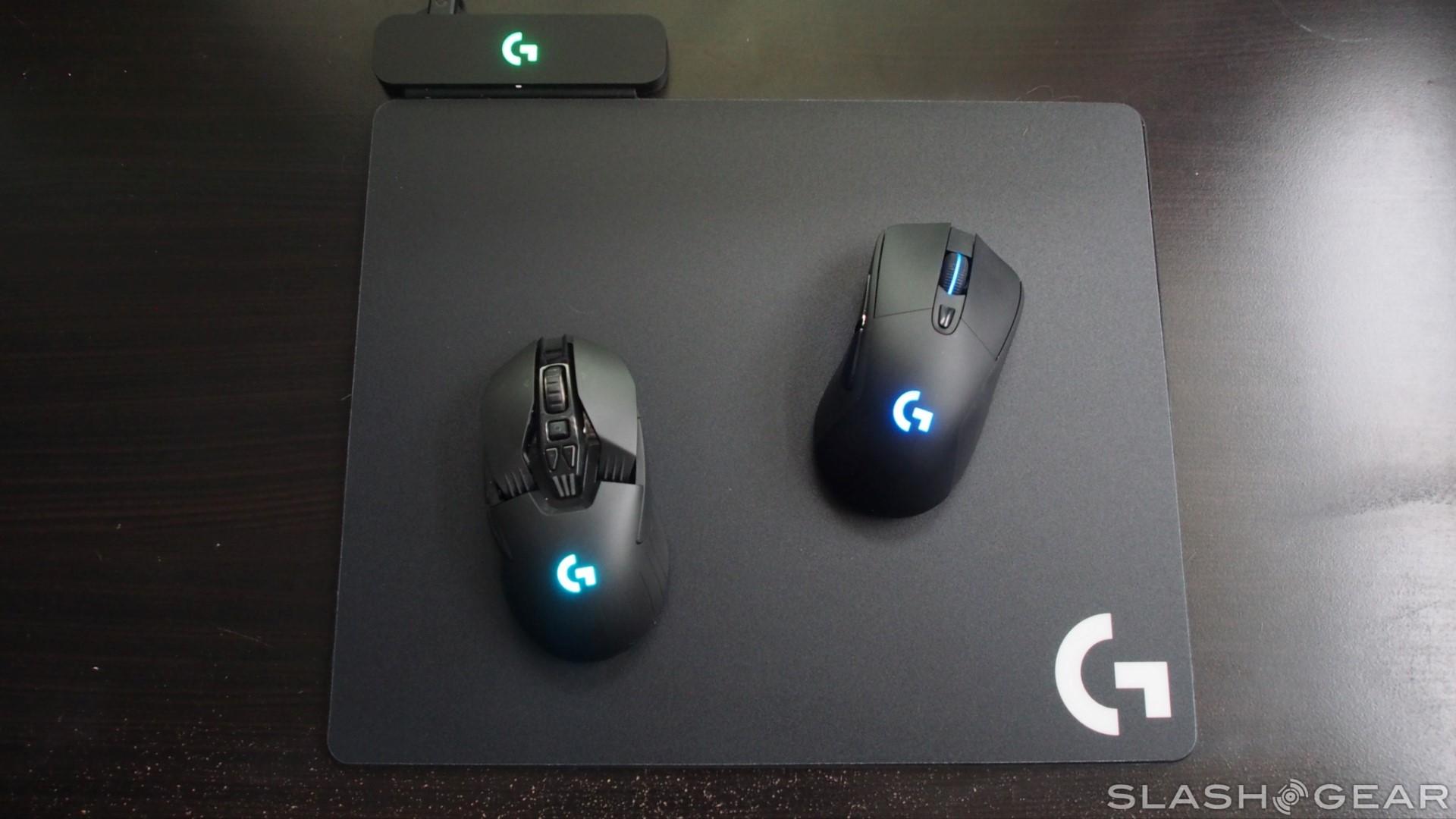 The G703 and G903 are both wireless mice that function mostly as you would expect a wireless mouse to. They both ship with rechargeable batteries and detachable micro USB cables you can plug in whenever you’re running low on juice. Pretty straightforward so far, right?

The difference between the Powerplay series and other wireless mice actually has nothing to do with the mice at all, but rather the mousepad. That mousepad acts as a wireless charger for both the G703 and the G903, keeping them topped up as you use them. As long as you’re using the mousepad, you’ll never need to plug the mouse in, solving the biggest issue with using wireless mice for gaming. 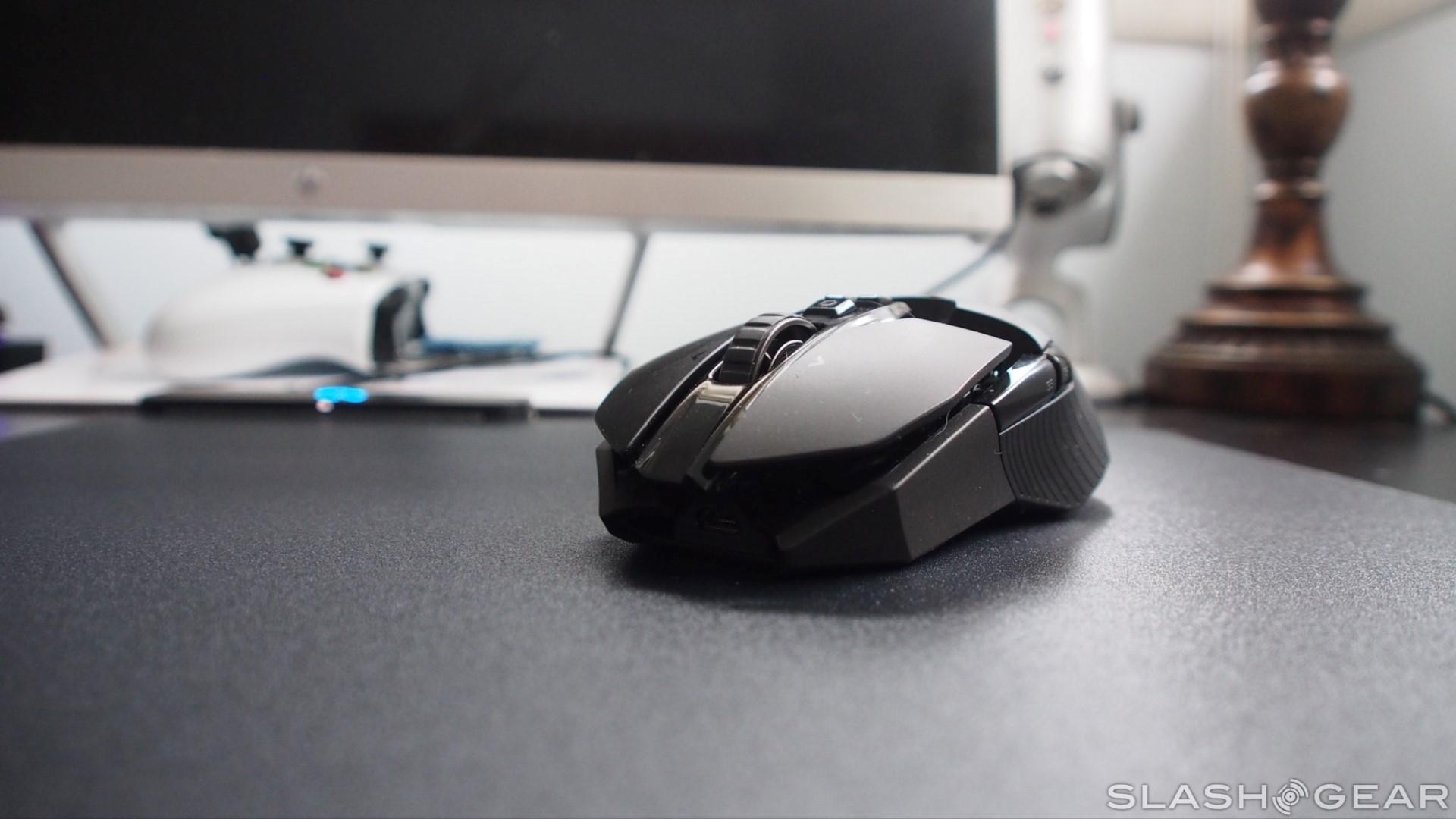 That the Powerplay mousepad acts as a wireless charging pad is exciting enough on its own, but obviously, that’s only one part of the equation here. As cool as a wireless charging mousepad is, there’s no real reason to invest in the Powerplay system if the mice aren’t any good, after all. Let’s take an in-depth look at both of them to figure out if either is worth the cost.

If we were to assign a category to the G703, we’d say that it’s the G-series mouse meant for more mainstream audiences. The mouse itself has just five buttons (if we’re not counting the clickable scroll wheel): left and right, obviously, along with a pair of buttons on the left side of the mouse, where your thumb will rest. It also has a button below the scroll wheel that you’ll use to cycle through DPI profiles. It’s not an overly complex mouse and it should be good for most any type of gamer, unless you prefer mapping hotkeys to a mouse for quick skill rotations in an MMO. 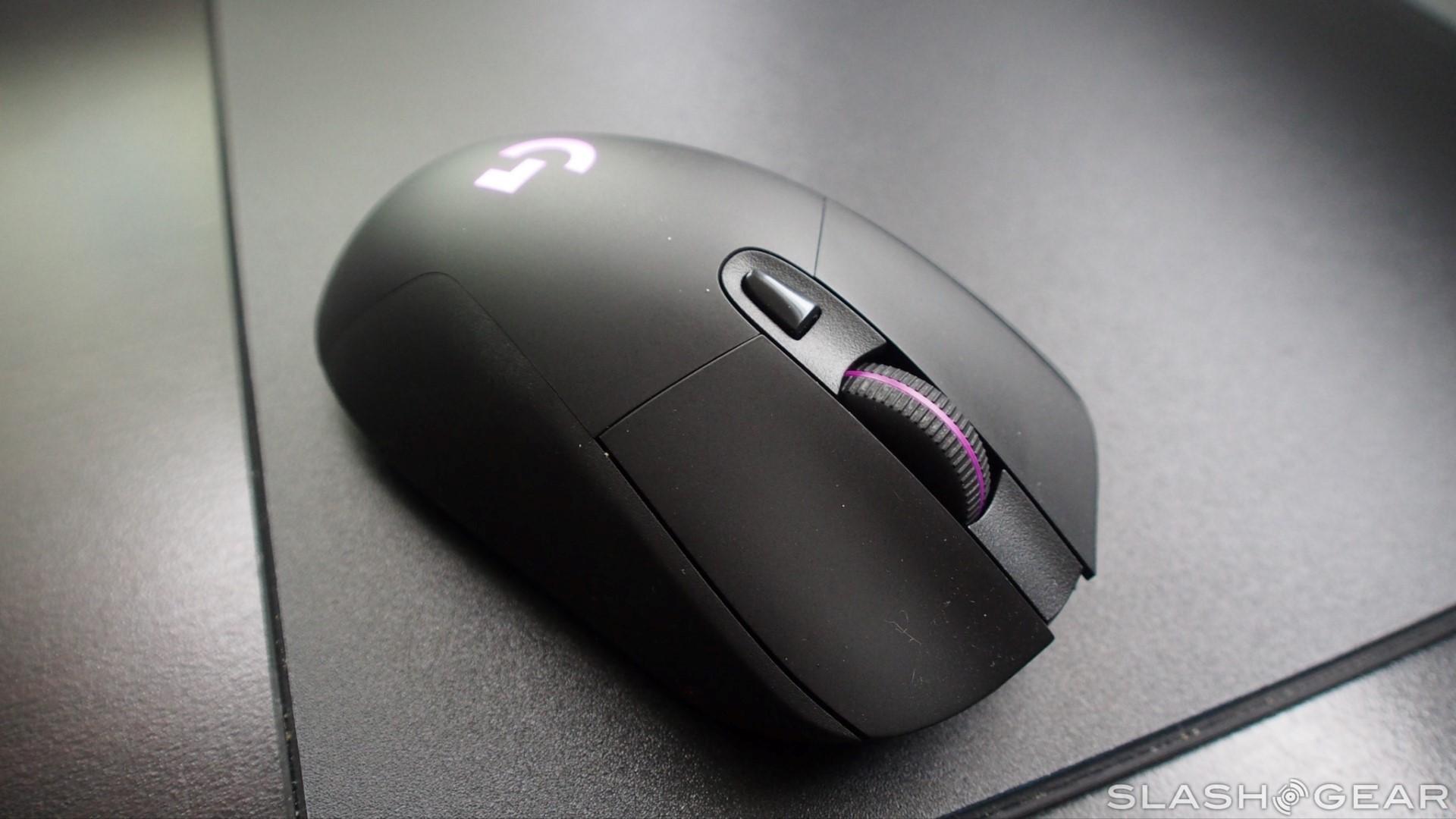 There are a lot of mice out there that scream “I’m a gaming mouse,” but with its all-black design, this isn’t one of them. It isn’t free from that certain gaming flair, necessarily, as the Logitech G and the scroll wheel do light up. All in all, though, this is a solid mouse for people who don’t need RGB lights that sync up with your keyboard or a ton of different buttons.

The buttons that are there seem to work flawlessly, in my experience. In my time with the mouse, I’ve yet to experience anything in the way of dropped inputs or shallow clicks. Speaking of clicks, the buttons on the G703 let off a very satisfying sound when you click them. It isn’t a quiet mouse, but then again, those who have had the pleasure of a truly hefty click know there’s no going back to silent mice anyway. 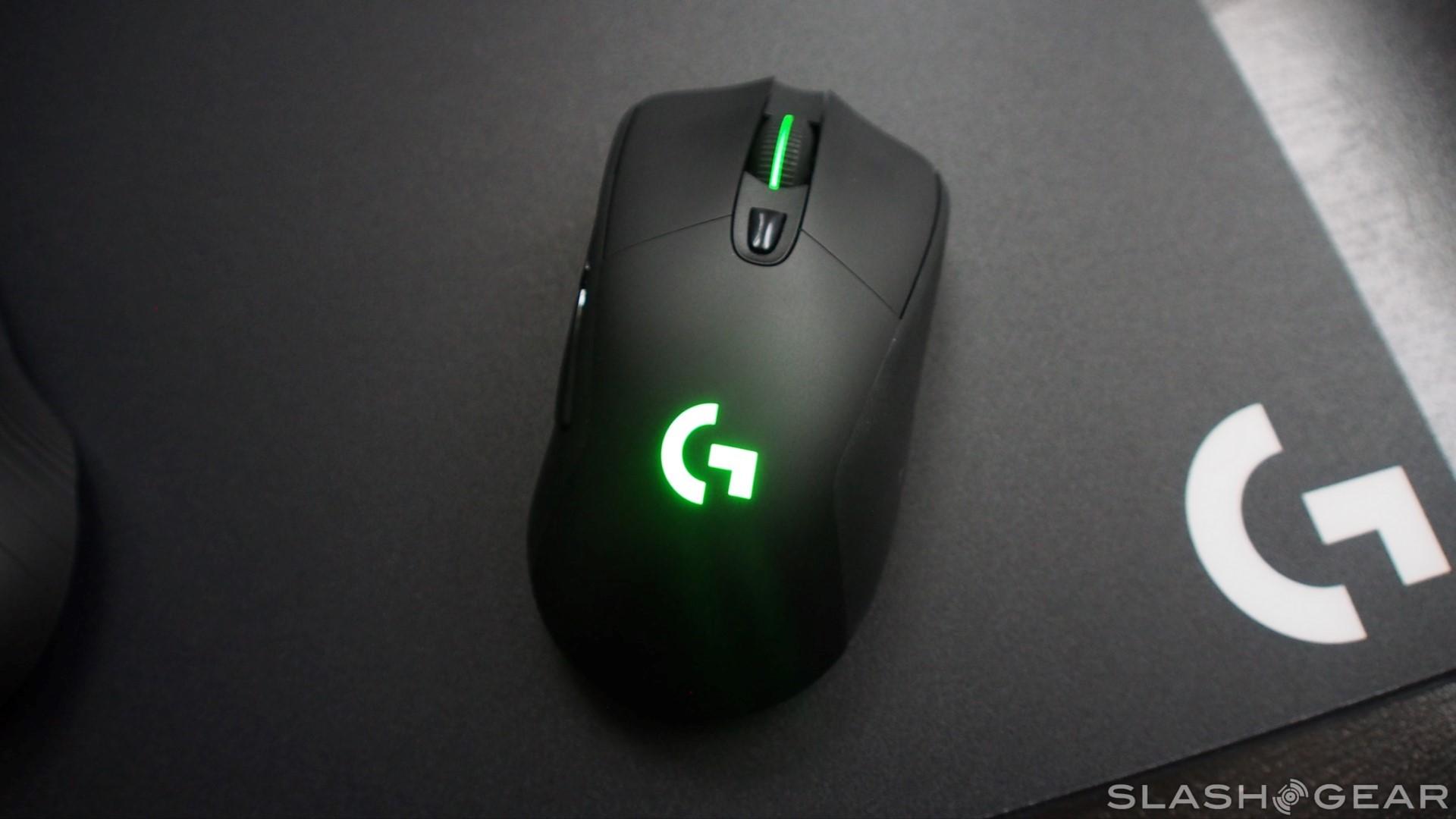 While the G703 might be relatively unexciting compared to its big brother, the G903, that doesn’t mean it’s a bad mouse. In fact, it’s quite the opposite: sturdy but not heavy, with a nice, inoffensive design. It feels good in the hand, and I’d even go so far as to say that it gives off a Microsoft Intellimouse design. Perhaps the only mouse in the world that people actually feel nostalgia for, the Intellimouse is fondly remembered as a no-nonsense mouse that felt good in the hand and held up to some abuse. The G703 feels very similar in that regard.

If, on the other hand, you want something with more of that gaming mouse feel, the G903 is for you. It has the same all-black color scheme as the G703, though its design looks a little more sleek. For that matter, the G903 shares a lot of things with the G703: it has the same two shoulder buttons on the left side of the mouse and those lovely, loud clicks that grace each button press. 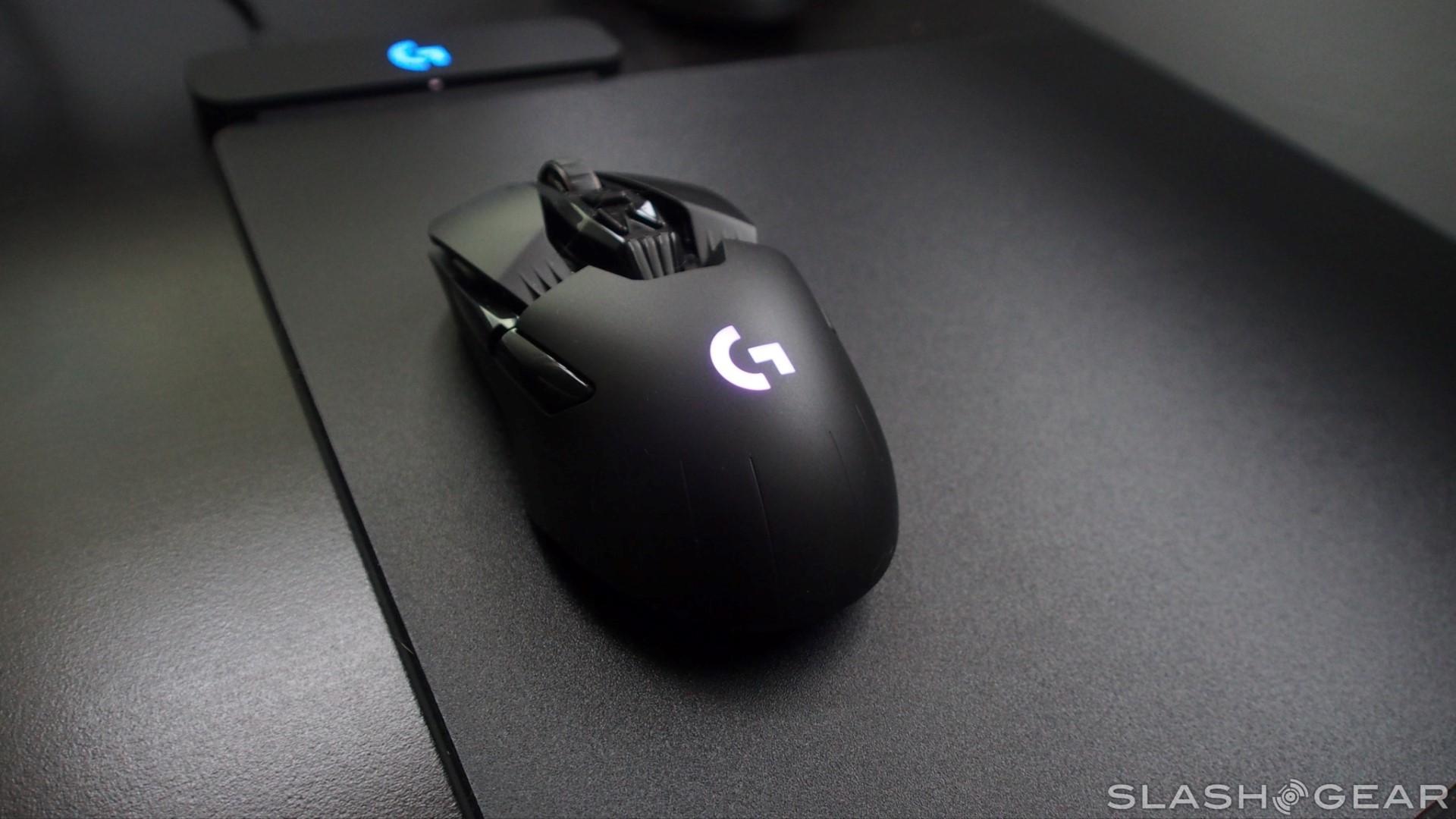 Aside from the design, there’s one major difference in the G903 when compared to the G703. In a shout out to our left-handed brothers and sisters out there, the G903 is an ambidextrous mouse. It isn’t the lazy kind of ambidextrous where the right-handed configuration is still more comfortable to use than the left-handed one, either.

No, the G903 is truly ambidextrous, offering a symmetrical design that even allows you to move the buttons on the left side of the mouse over to the right side. If you’re a left-handed gamer and you’ve been looking for a good ambidextrous mouse, Logitech has you covered with the G903. 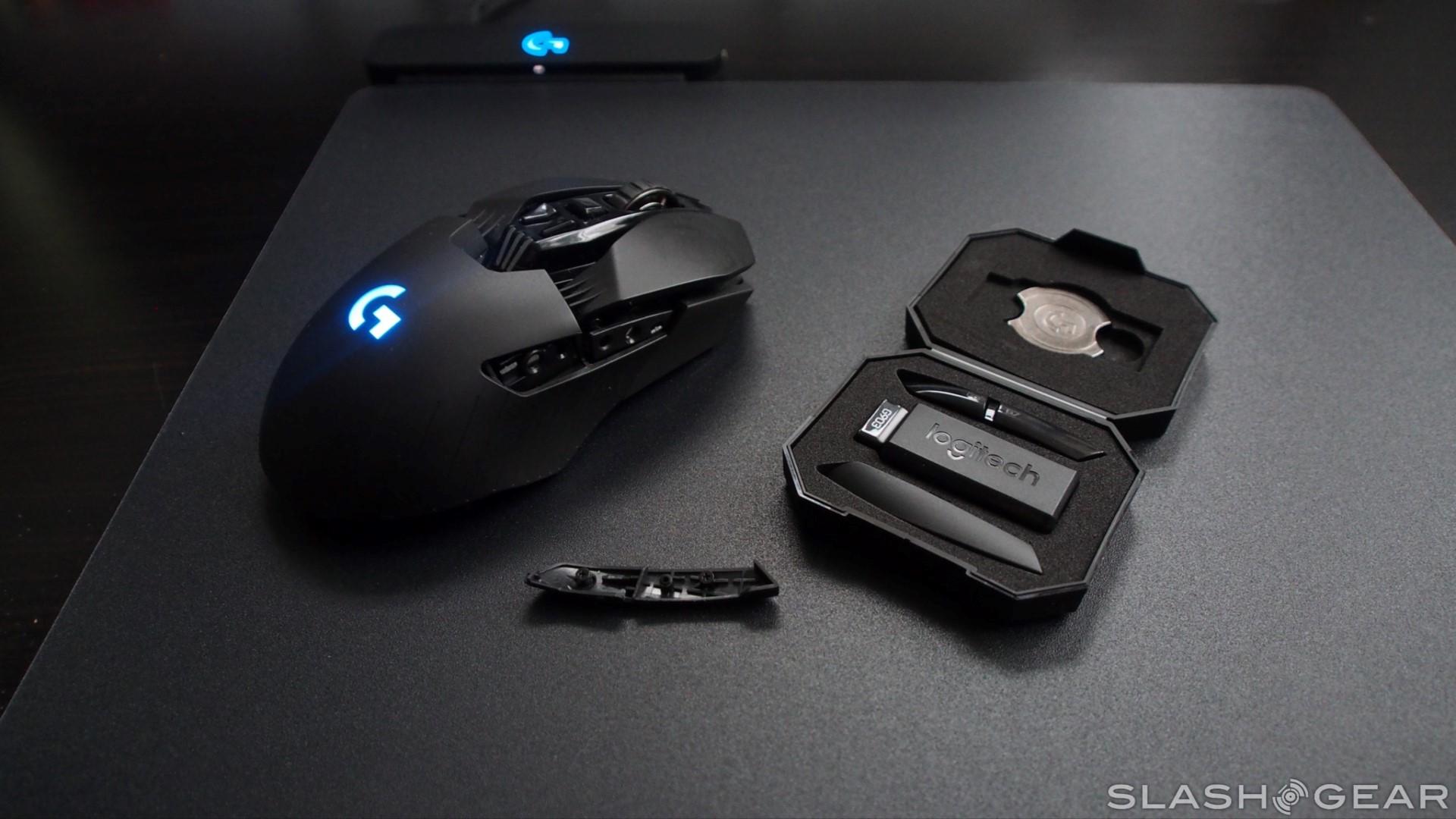 In my experience, ambidextrous mice usually feel a little less comfortable than those which are made with a specific orientation in mind, but that isn’t the case with the G903. This is one of the most comfortable mice I’ve ever used, and I’ve had no problem using it as my daily driver since I started testing it. I will say that it is a little large in terms of length, which isn’t a problem for me since my hands are so big they might as well be baseball mitts, but for someone with smaller hands, this might prove to be a little too large.

Still, that’s really my only complaint about the G903. It’s a fantastic mouse that keeps with Logitech’s reputation for making quality PC gaming peripherals. If you can’t or don’t want to buy the Powerplay mousepad, the G903 is still worth a purchase as a standalone product. Even without its major hook (wireless charging through the mousepad), the G903 is still an excellent mouse that I think most PC gamers will enjoy using.

While the G703 and the G903 make stellar gaming mice, it’s the Powerplay mousepad that’s arguably the star of the show here. After all, it’s the mousepad that makes it so you’ll never have to plug in your mouse, so without it, the G703 and G903 become a pair of excellent-but-still-battery-powered gaming mice. 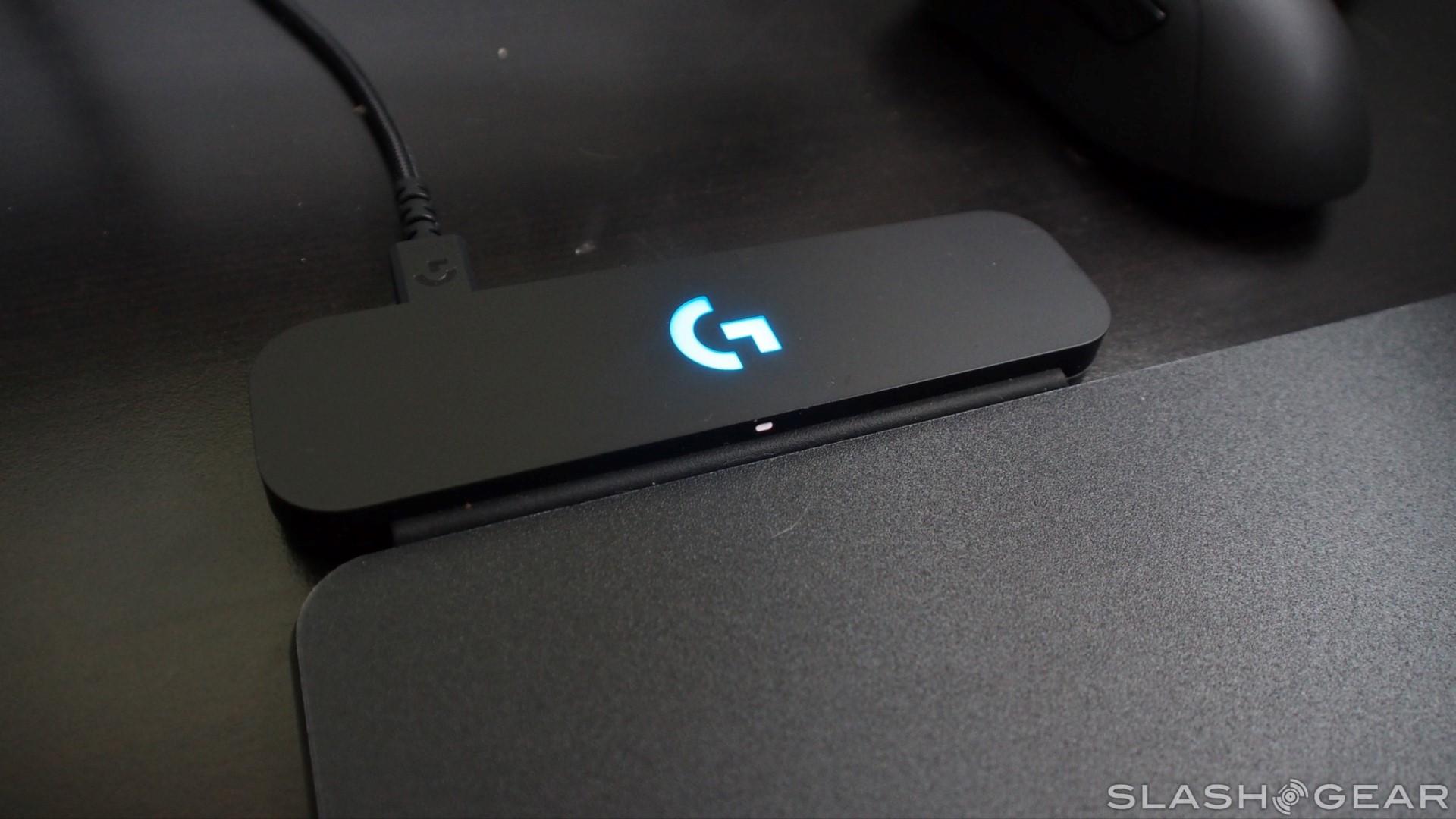 As far as looks are concerned, the Powerplay mousepad is fairly standard. It comes with both soft and hard pads to lay over the wireless charging mat, allowing you to pick the feel that’s right for your set up. These pads seem to be top quality, and having tested them both, I have zero complaints (for the record, the hard pad is the one you see in all of the photos here).

The mousepad features sports a module attached to the upper left that features a light up Logitech “G” just as you see on the mice. It’s this module that plugs into a USB port on your computer, facilitating communication between your mouse and PC from there. That, importantly, means that you don’t need to use the wireless dongle that ships with your G903 or G703 as long as you’re using either mouse with the mousepad. The fact that the entire system can run using a single USB port is impressive and even sometimes necessary when you consider just how many things we’re plugging into PCs these days. 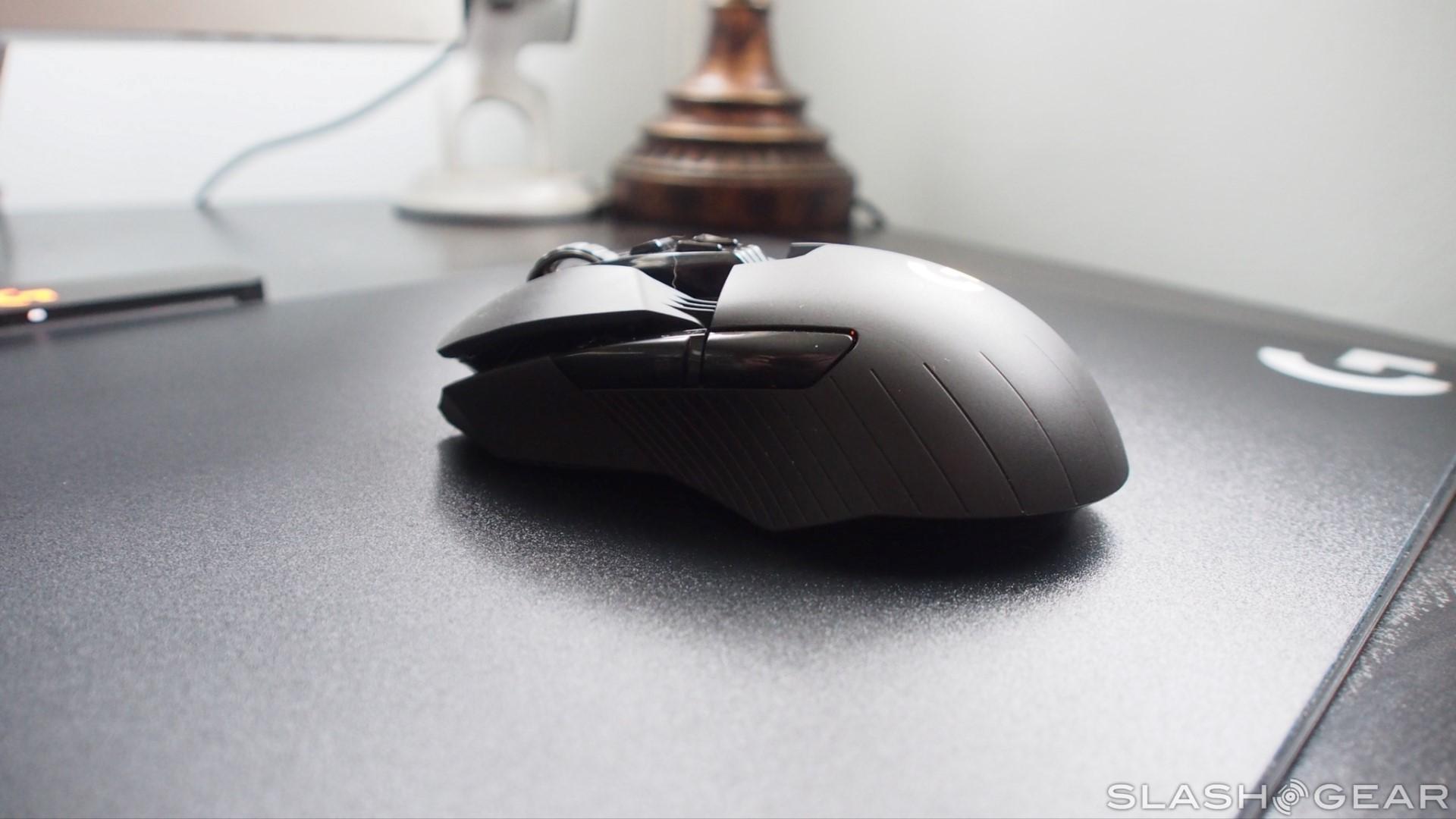 The wireless charging mat that sits beneath the mousepad itself is packed with charging coils that will keep your mouse topped up as you use it. What’s most impressive about the Powerplay mousepad is that it charges your mouse regardless of its position on the mat – a far cry from the wireless charging pads many of us are used to, which require you line up the coils in it and your phone precisely in order to begin charging.

Set up is a breeze too, requiring only four steps. All you need to do is plug your mousepad into your computer, turn in on, then insert the circular battery the pad ships with into the underside of your mouse. From there, you simply turn the mouse on and wait for it to pair with the mousepad (something that happens automatically) and you’re good to go. There’s no going into your Bluetooth settings on your PC or plugging the mouse itself in before you use it for the first time, and while that may not seem super important, it’s always nice to get up and running quickly with new equipment. 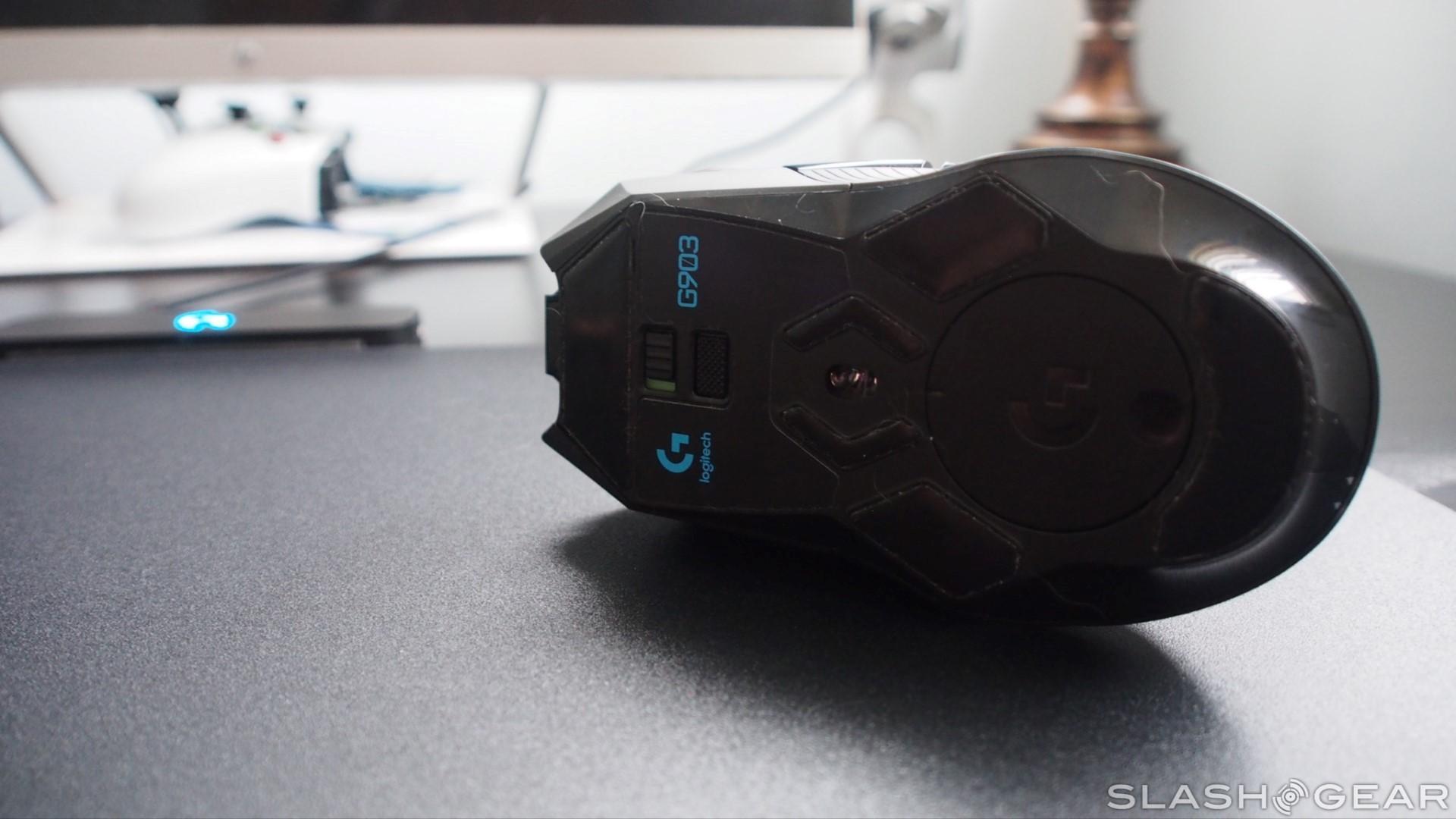 In short, the Powerplay mousepad is an excellent piece of equipment that is truly impressive in its capabilities. It feels a little strange to be raving about a mousepad of all things, but I’m struggling to come up with a negative about it. Its ability to wireless charge your mouse as you use it along with its ease of setup makes this a mousepad that’s just plain cool and a joy to use.

At first, I was a bit skeptical about the whole Powerplay system, but I have to say that I come away from this review immensely impressed by what Logitech has put together. It would have been enough for Logitech to solve the biggest problem associated with wireless mice – something the Powerplay system does very effectively – but as icing on the cake, the hardware Logitech has crafted as part of this ecosystem really is top-notch. 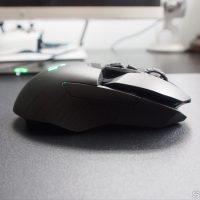 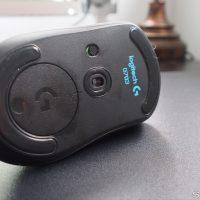 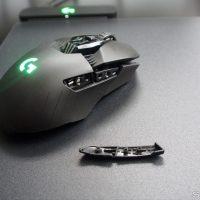 While both the G703 and G903 are excellent mice, the G903 is my personal favorite. Both mice are built around Logitech’s Lightspeed wireless technology, and the result is a pair of wireless mice that feel good in the hand, seem to have no latency problems, and are free from connectivity issues. That means a lot when I’m coming from a battery-powered wireless mouse that would sometimes lag and drop inputs, despite the fact that its wireless receiver was only ever a few feet away.

The only issue that can see here is one of price. The Powerplay mousepad costs a significant $100, while the G703 and G903 clock in at $100 and $150, respectively. That’s a lot to spend on mice and mousepads, but if you have the cash and see no downside to wireless mice aside from the fact that they need to be charged every once in a while, I’d say diving into the Powerplay ecosystem is well worth it. 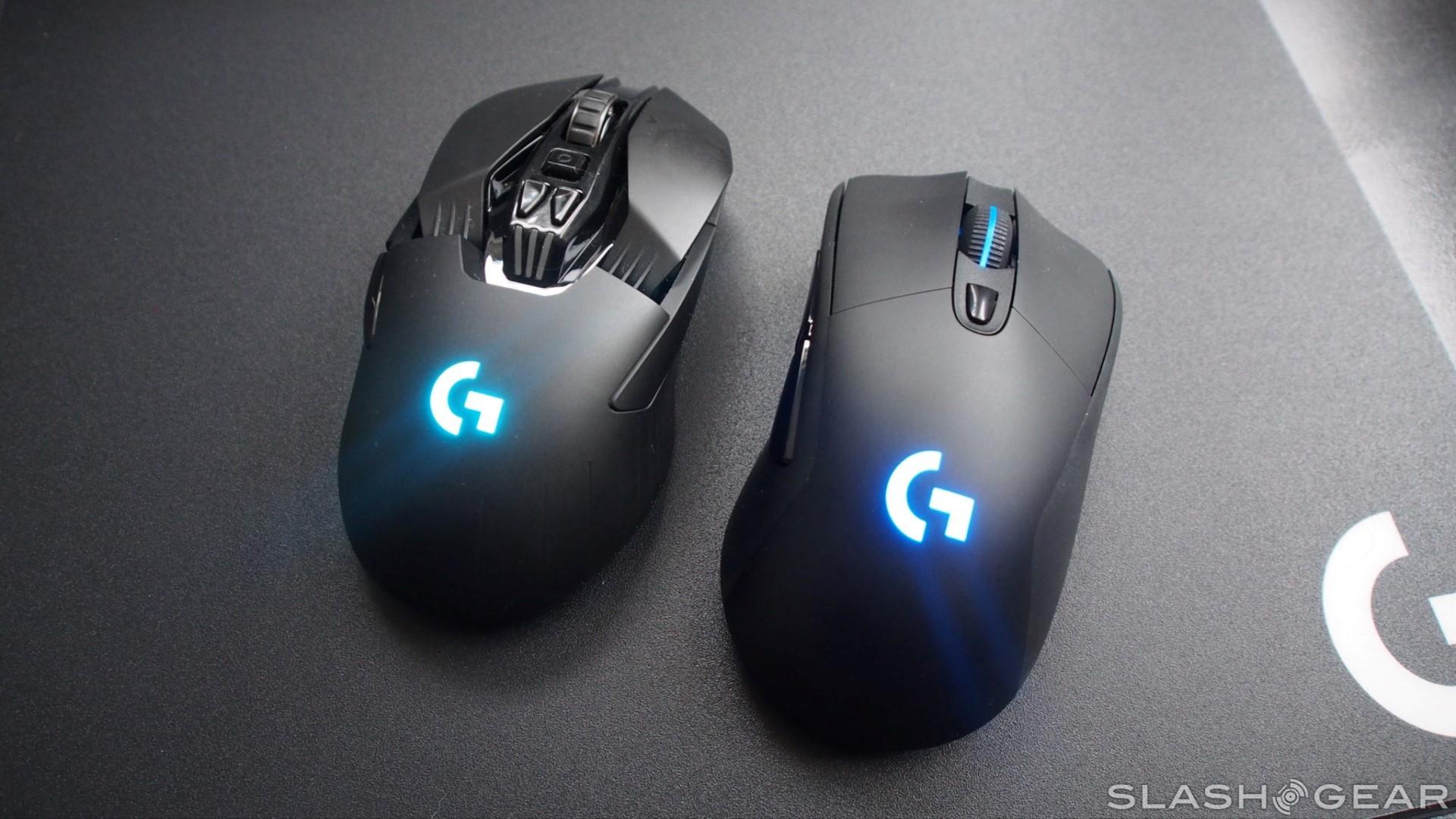 You can, of course, skip the mousepad entirely and buy one of the mice as a standalone product as a way to save some money. You may need to do that for the time being, since the Powerplay mousepad is frequently sold out on Logitech’s website (and is at the time this review is being published). It seems that Logitech is onto something great here, as consumers seem to be onboard with Powerplay’s sales pitch.

Regardless of whether you’re thinking of buying a mouse on its own or buying a mouse and mousepad together, I have no problems recommending any of these products to someone who’s looking for a good wireless mouse set up. Hats off to Logitech, because it could very well get me to ditch wired mice entirely – something I would have never considered a few weeks ago.