For the third time in so many days, the SpaceX group will be attempting to launch mission CRS-6. This mission will be the first to recapture the section of the rocket normally lost once separated from the payload, thus creating an environment in which space travel – and the delivery of goods and astronauts to the International Space Station – has its costs lessened significantly. Today there is a 60-percent chance of a successful mission launch, while yesterday’s launch was canceled by an anvil cloud.

Below you’ll be able to watch the lead-up events and talks preparing for the CRS-6 launch this afternoon. This same video feed will also cover the launch in its entirety, should it indeed be able to take place.

This afternoon there’s also a chat on NASA’s New Horizons Mission to Pluto. As this article is being published, NASA is speaking on how our approach to Pluto can be a reality in the near future.

As of 12:50 Eastern Time, 1650 GMT, Cape Canaveral’s Complex 40 launch pad housed the Falcon 9 rocket and fueling had begun. Both liquid oxygen and RP-1 fuel will be used in today’s launch. A four-hour span is set between fueling’s start and potential launch. 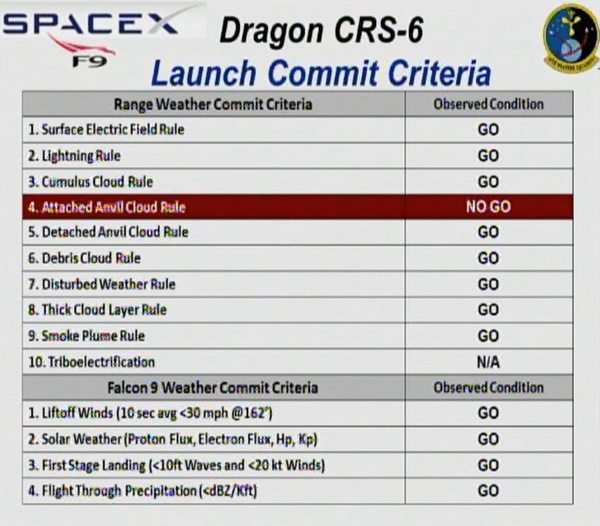 Just so long as all of the following commit criteria are met. See that anvil cloud? Again, that’s what scrubbed the launch yesterday. Watch out for anvils!