CMS and LHCb collaborations describe the first observation in a lab of the very rare decay B0s particle into two muon particles. Why should this matter to you, you might be asking? Why should this science have any effect on your lifestyle? It really won’t – but it will affect the way we continue to unfurl the never-ending scroll of knowledge that is science and physics in our universe. Our very understanding of the nature of the Universe, the start of our existence, and the Standard Model of our universe of particles – all of this is at stake.

Do you know what the Large Hadron Collider is? If not, I demand that you see this surprisingly well put together explanation made by the team at CERN back in 2008. In rap form. Dropping science like galileo dropped the orange.

Once you’ve got that packed in deep inside your brain, get this.

The LHC jams protons together. One of the subatomic particles this machine creates is the strange B meson.

This strange B meson is unstable and decays into lighter particles – every time it’s made. One of the rarest decays is a pair of particles call muons. Before now, scientists have been unable to capture the decay of these particles with the statistical precision needed to “claim an observation.”

You can’t suggest you’ve seen anything until you can prove it, that is to say.

ABOVE: A depiction of how scientists used the Large Hadron Collider to observe the rare trail of the strange B meson particle, bolstering a longstanding theory of particle physics. PHOTO: CERN

“The search for new particles and the study of rare decays are complementary strategies for discovering new physics,” said CMS spokesperson Tiziano Camporesi.

“The precision with which the experiments can measure these key decay rates will steadily improve, thus limiting the viable extensions to the Standard Model.”

BELOW: Event displays of a candidate B0s particle decaying into two muons in the LHCb detector (top – Image: LHCb/CERN) and in the CMS detector (bottom – Image: CMS/CERN) 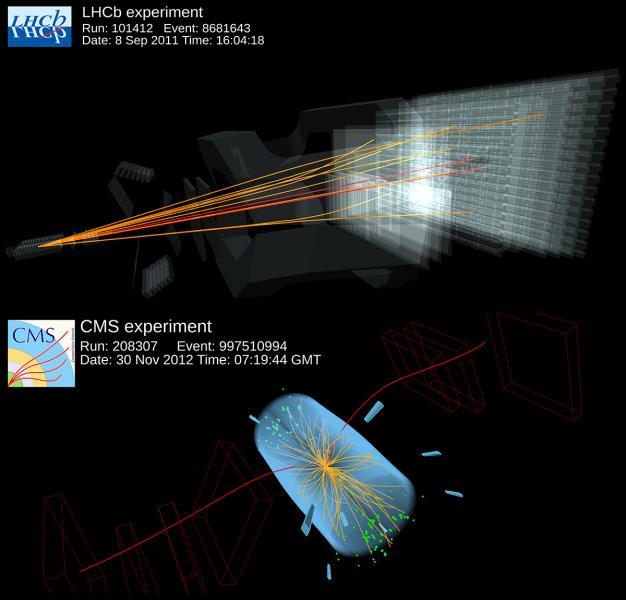 That’s what this is all about – the hunt for new physics.

Decay helps us to understand why the universe is changing – why when the Big Bang occurred, the universe was equal parts matter and antimatter, yet now consists mostly of matter.

Where did all the animatter go?

Thanks to the work of the LCHb at CERN and CMS, we may some day know.