LG may have a massive 84-inch smart TV for those with big rooms and deep pockets, but the company’s TM2792 hopes to bring 3D and internet-connectivity to those with more humble aspirations. Measuring in at 27-inches, the “mini smart TV” announced back in August is LG’s attempt to cater for single-person households who don’t want to give up premium features like integrated WiFi and media streaming.

So, the LG TM2792 still runs at 1920 x 1080 resolution, and has an IPS LCD panel with broad viewing angles. It stands on a metal base and has ultra-skinny bezels, and LG supports 3D and 2D-to-3D conversion using its passive 3D system. 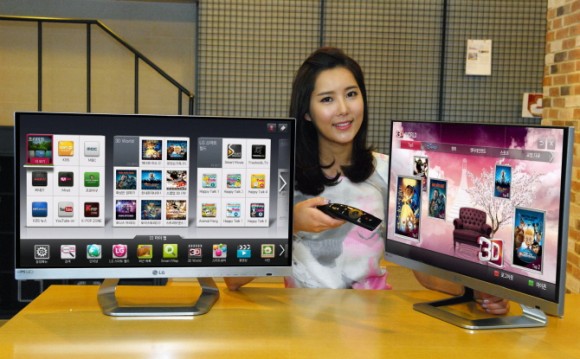 LG’s “magic remote” is supplied, and there’s input support for HDMI, VGA, composite and component, along with SCART, three USB ports, and an ethernet connection. The integrated WiFi supports WiDi and WiFi Direct, and the USB can handle MHL HDMI for directly hooking up your smartphone or tablet.

The new LG goes on sale in Korea this weekend, and will launch internationally later in the year. No word on pricing at this stage, though interestingly there’s already one third-part seller on Amazon UK listing the TM2792 for £563.49 ($908).