LG have officially launched the Prada II cellphone, as expected, and it’s brought along a friend in the shape of a Bluetooth watch, the Prada Link.  Like other such devices we’ve seen, it can show caller ID as well as preview text messages, without requiring you to whip out the handset itself (and promptly get mugged).  As we’ve already seen, the Prada II itself is a 3G HSDPA (900/2100MHz) device with WiFi, a 3-inch capacitive WQVGA touchscreen and a slide-out QWERTY keyboard.

As well as the main, 5-megapixel camera, there’s a front-mounted second camera for video calls.  The Prada II also has haptic feedback, to confirm that you’ve selected things, which works with LG’s new “active flash” menu system, a slick update on the original Prada phone GUI.  Preloaded on the handset are exclusive Prada ringtones, clips and wallpapers, together with the fashion label’s Fall/Winter 2008 Lookbook. 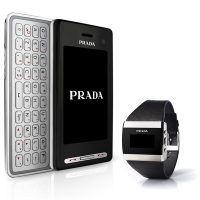 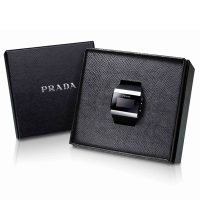 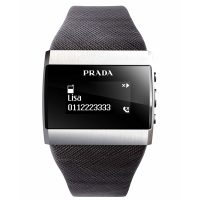