UK carrier Orange may not have secured the Palm Pre, but from the sound of it they don’t really mind; their next high-end device is far more unusual than a simple slider smartphone.  The carrier has revealed that it will be exclusively offering LG’s GD910 Watch Phone in the UK this August, complete with capacitive touchscreen and integrated video calling. 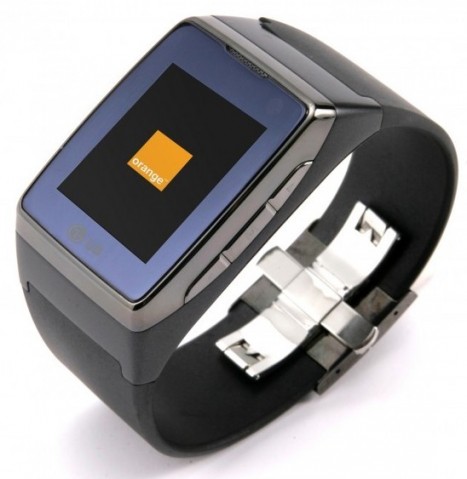 The GD910 also has integrated Bluetooth, for use with a hands-free headset, and 3G UMTS connectivity.  Alternatively a built-in speaker turns your wrist into a speakerphone.  Interestingly, Orange will be selling the Watch Phone on a pay-as-you-go plan, rather than a contract; they also describe their exclusivity as a “limited time period”, suggesting that the GD910 will get a broader release in the not-too-distant future.

Still unconfirmed, however, is price, but it’s expected to retail for around £1,000 ($1,621).  According to Orange it will be just the first of several high-end and unusual devices on offer from the carrier over the next 18 months.

Orange to launch Watch Phone exclusively in the UK this summer – one of several latest must-have multimedia devices from Orange to be announced over the forthcoming monthsOrange today announced that the world’s first Touchscreen Watch Phone will hit UK stores in August. The LG Touchscreen Watch Phone will be one of several new innovative ‘future phones’ Orange will be ranging over the next 18 months, chosen specifically for their unique digital lifestyle benefits that allow users to make the most from the latest shifts in modern technology.
Available from Orange for a limited time period, the Watch Phone will be available at an exclusive price point on Orange pay as you go. The device features a compact and stylish design with a Bluetooth headset, in-built speaker and a full touch-screen interface, as well as 3G+ and video-calling capabilities.
The device heralds a new focus from Orange, to showcase the latest innovative, original, and high-end multimedia devices on the market, with at least three new market-leading devices to be unveiled by the end of the year.

Tom Alexander, CEO Orange UK said: “The Watch Phone is the must-have gadget of 2009. It’s handcrafted, exclusively limited, and will turn heads on the high street.
“Our ambition is to become the best loved communications brand in the UK, and the destination brand of choice for high-end mobile users in the market. To help us achieve this, we have secured some of the most original and innovative devices available.
“The Watch Phone is the first of these devices, all focused on bringing a 21st-century experience to our 21st century customers.
“Over time we also intend to match the power of these devices with bespoke multimedia packages, driving even more inspirational conversations and deeper connections for our customers.”
Mobile Multimedia
Orange has already begun integrating multimedia services into its animal packages, with the company now offering inclusive ‘sat nav’, mobile internet and email services on select pay-monthly price plans.
Furthermore, recent developments in device advancements, matched with the creation of price plans designed for multimedia usage have helped make it easier for consumers to access the content they want when on the move. On average 3.25 million monthly users now use Orange World (Orange’s mobile internet portal) and over one million Orange customers use their handset to access social networks every month.
For more information on all Orange’s price plans and current handset range, please see www.orange.co.uk
-Ends-
About Orange
Orange is the key brand of the France Telecom Group, one of the world’s leading telecommunications operators. With 123 million customers, the Orange brand now covers Internet, television and mobile services in the majority of countries where the Group operates.
At the end of 2008, France Telecom had consolidated sales of 53.5 billion euros (12.7 billion euros for the first quarter of 2009) and at 29 April 2009, the Group had a customer base of almost 184 million customers in 30 countries. These include 123 million mobile customers worldwide and 13 million broadband Internet (ADSL) customers in Europe. Orange is the number three mobile operator and the number one provider of broadband Internet services in Europe and, under the brand Orange Business Services, is one of the world leaders in providing telecommunication services to multinational companies.
In the UK, Orange provides high quality GSM coverage to 99% of the UK population. At the end of March 2009, Orange had almost 17 million customers in the UK – 15.8 million active mobile customers and close to one million fixed broadband customers.
Orange and any other Orange product or service names included in this material are trade marks of Orange Personal Communications Services Limited.
For more information: www.orange.com, www.francetelecom.com, www.orange-business.com For further information, call the Orange press office on 0870 373 1500 or email: Orangepr@golinharris.com or visit www.orange.co.uk/newsroom