LG has outed a range of new IPS LCD displays as part of its 2012 panel push, with the LG DM92, DM82 and DM52 series and D43 3D monitor toting slimline bezels and the sort of broad viewing angles we’re used to from IPS panels. The LG DM92 is likely to be of most interest, a 27-inch display with mere 1mm bezels, paired with a chrome kick-stand and 3D support, though the 23-inch DM82 – with its slim base and support stand – is perhaps better sized for smaller desks.

It still manages to pack in 7W integrated speakers and that all-important IPS display, however, with support for 3D graphics. The DM52 series includes 23- and 27-inch models, with 3D support and both HDMI and USB inputs for showing content from your computer, AV kit or even a thumb-drive.

As for the LG D43, that can actively convert 2D graphics into 3D, without demanding any specific software be running on your computer or AV player. A dedicated 3D button allows for simple tweaking of the depth effect.

LG will be showing off the new range at CES 2012, with a global launch beginning in February. No word on pricing at this stage. 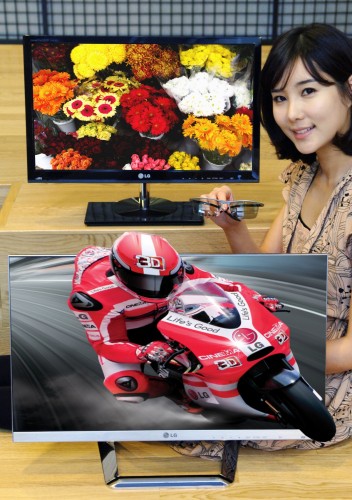