LenovoEMC has revealed its latest high-performance NAS, a four-bay backup and media-streaming center targeted at prosumers and small offices. The LenovoEMC px4-400d can store up to 16TB spread across four drives, and runs up to 25-percent faster than its predecessor, the company claims, thanks to a switch to Intel’s new 2.13GHz Atom D2701 dualcore processor and 2GB of memory. It also includes a new batch of ports, including USB 3.0, for easier expansion.

In fact, there are four USB 2.0 ports, a single USB 3.0, and an eSATA for adding external drives. There’s also an HDMI output for using the px4-400d as a surveillance camera station, and two gigabit ethernet ports; a PCIe expansion card can be used to add analog video output. 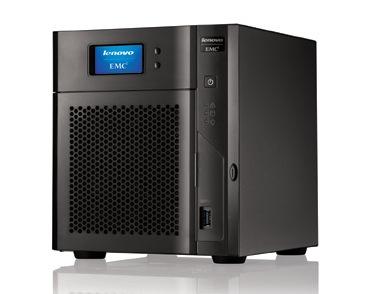 When we asked LenovoEMC managing director Jay Krone why the company had only included a single USB 3.0, he argued that – so far – the NAS segment isn’t really demanding faster external drive support. Not only are NAS chipsets only just starting to include 3.0, but bottlenecks elsewhere – such as network speed – mean USB 2.0 and eSATA are generally “either all you need or all you can handle” Krone explained.

It’s a similar issue with even faster connectivity, like Thunderbolt, he suggested: the cost of including it would be far more than most would pay, considering how few people would actually take advantage of the connection.

Instead, you get RAID, the Twonky media streaming server, a specially-baked version of BitTorrent app Transmission designed to run in standalone-mode on the px4-400d, and support for SSDs if you’re feeling flush with your storage. Those using the NAS with Lenovo laptops and desktops will get auto-discovery, too, with the px4-400d automatically showing up as a network storage option.

LenovoEMC will offer the px4-400d Network Storage in both diskless and pre-populated versions, depending on market. The diskless unit is $729.