A listing has appeared and subsequently disappeared and/or “sold out” on a couple of sites, this listing containing no less that Lenovo’s IdeaPad K1, aka the LePad if you’re in China. This device is slated to be released in June, but these seemingly early-placed spots are popping up as we speak. The two sites that have the listing thus far are Buy.com and Krex.

The Krex listing, which you can see here, shows the device out of stock and has it listed at $510. Over at Buy.com, the listing has no price point, but a much more massive listing with larger images. These images can be found in the gallery below. This device seems to be quite the little number, if all the specs are correct, it running Android 3.0 and an NVIDIA Tegra 2 processor at 1.0GHz out of the box. 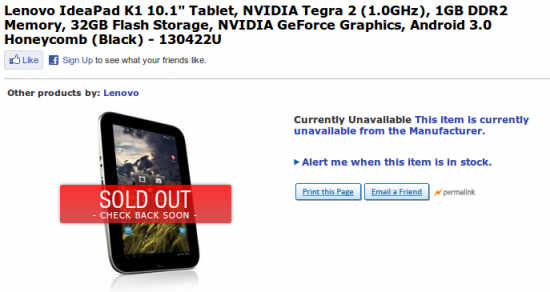