This past August, the (at the time) latest Snowden leak revealed a secret hacking collective at the NSA called Tailored Access Operations, more commonly referred to as TAO. More information surfaced about the unit is subsequent leaks, the latest of which includes a couple pictures of the TAO bugging intercepted network hardware.

Following the original TAO leak, more details surfaced by way of additional documents detailing the division’s widespread network-hacking initiatives. It was in December when word surfaced about the deliberate inception and bugging of network hardware. 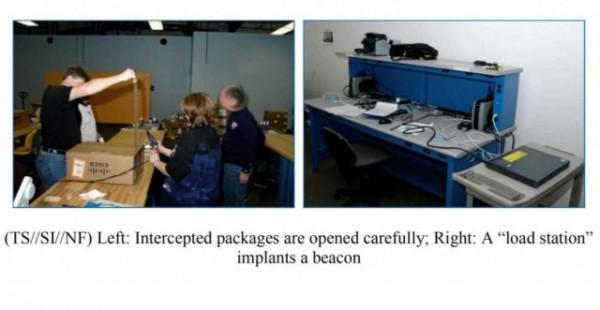 The latest information on this interception and bugging comes from an article by the NSA’s Access and Target Development department in an internal newsletter from June 2010. Included with the article were a couple images showing the bugging in process, featured above.

The hardware includes routers, servers, and similar networking devices destined for targets under surveillance. The packages are intercepted and bugged, then sent on their way, providing access points for spies to monitor the targets’ activities.