Microsoft has been expected to announce a new pair of flagship Windows-powered phones under the Lumia name in October, and while we’ve already seen a few leaked photos and spec lists, now what appear to be official press renders have been discovered. The new images come from Evan Blass, better known as @evleaks on Twitter, a reliable and often correct leaker. What we see now are the 5.2-inch Lumia 950, codenamed Talkman, along with the larger 5.7-inch Lumia 950 XL, codenamed Cityman.

Right off the bat, it’s obvious the new phones maintain the squarish look Lumia is known for. On the backside, just above the simple Windows logo, we can see the cameras have a slight bump. In the image above, the 950 XL is the one in bright blue, while the regular 950 is in black. 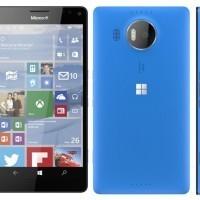 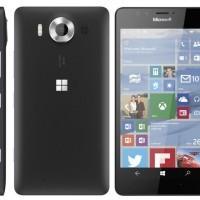 Both of the new Lumias are expected to have a number of identical specs: 3GB of RAM, 32GB of internal storage with microSD card support for expansion, along with USB Type-C ports and Qi wireless charging. Both will feature Quad HD (1440×2560) OLED displays, and while the 950 XL is getting a octa-core Snapdragon 810 processor, the 950’s chip will be a six-core Snapdragon 808.

As for cameras, once again both phones look like top-notch devices with 20-megapixels on the back and 5-megapixels on the front, plus an infrared iris scanner for facial recognition. Both batteries will be removable, with the 950’s being 3000 mAh, and the 950 XL getting a slightly larger 3300 mAh. There’s also been talk about Microsoft’s Surface Pen being compatible with the 950 XL, so stylus fans should be pleased.