Lasers and carbon nanotubes peering into the brain might sound like the stuff of science fiction, but tests that could one day mean precise non-invasive diagnosis of Alzheimer’s, Parkinson’s, and other diseases are already underway. The technology, developed by chemists at Stanford University, has so far been tested on mice, but opens the door to an alternative to physically removing sections of the skull to track cellular-level changes.

Dubbed near infrared-IIa imaging, or NIR-IIa for short, the technique involves injecting water-soluble carbon nanotubes into the bloodstream. A near-IR laser is then directed at the skull, causing the nanotubes to fluoresce at a certain wavelength.

The light produced is actually just bright enough to penetrate through the skull and the skin of the scalp – in mice, at least – while still being precise enough to show the blood activity of capillaries measuring microns across. 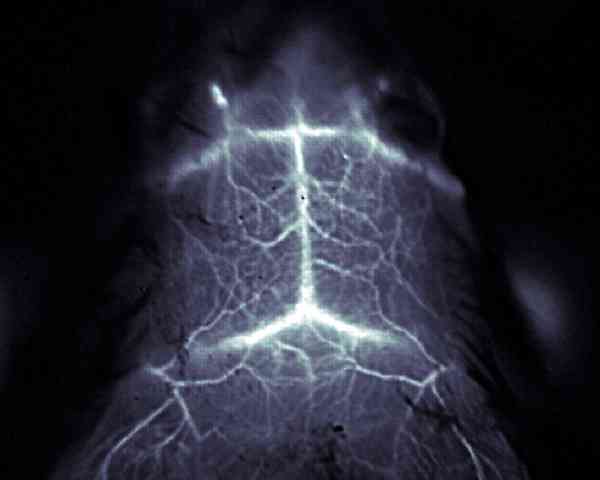 Existing tools to see how a live brain is working are generally either blunt or potentially traumatic. On the one hand, there are non-invasive methods like CT and MRI scans; however, they’re not sufficiently precise to show what individual blood vessels and neuron groups are doing.

In contrast, cellular observations can be made if sections of the patient’s skull are removed; that, though, requires significant surgery and introduces the risk of infection or other side-effects.

Before human trials begin, however, some upgrades will need to be made. For a start, the Stanford team led by study first author Guosong Hong will need to figure out how to increase the light penetration depth, since human brains are deeper than their mouse equivalents.

Perhaps more troublesome, right now there’s no clinical provision for injecting carbon nanotubes into human participants. Hong and the team are currently investigating whether alternative fluorescent agents might be swapped in their stead.

Still, if those hurdles can be passed, the potential is huge. Not only could the effects of diseases and issues like strokes, migraines, and chronic degenerative conditions be identified and monitored, but the technique could also open the door to far greater insight into how different neurons work.