One of the very pair of real-life Google Glasses from Google’s own Project Glass has appeared in England on the face of none other than CEO Larry Page. This pair of glasses is showing its lovely pre-release hardware to the world in brief on the brim of London at Google Zeitgeist. The “Beyond Talk” shared with the world via Google’s Zeitgeist Minds page showed Page speaking a bit about the glasses as well, saying how happy he was to have a pair of the glasses and that they’re working great already.

Page didn’t do a whole heck of a lot with the glasses – or just “glass” as he put it since there is only one, not one for each eye – but the after-talk had him snapping a photo. This move required Page to press a button at the top of the device near his temple, wait for it to be processed, move his head down and to his left, and tap the side of the glasses to “share that with the whole company.” This indicates that there is a physical camera button on the current iteration of the project and that the larger flat area on the side of the device is a touch-sensitive interface. 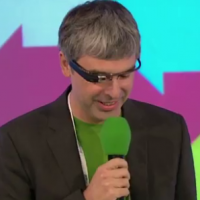 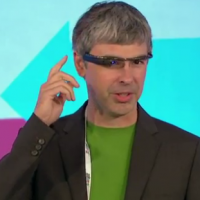 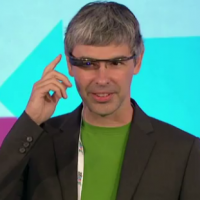 “These are obviously Google Glass, it’s only Glass because it’s only on one side. It’s still in a bit of an early stage but I’m really excited to be able to have one. And to have it working. … It doesn’t yet show me all of your names, but I’m really glad that you’re all here.” – Page

Have a peek at the video of Page wearing and using the glasses here, then head to the timeline below to get all the heavy coverage we’ve got on the project from the past few weeks as well!