Dinosaurs researchers are suggesting could be the largest species ever discovered have been identified from their fossil remains, around 130 feet long and weighing roughly the same as 14 elephants. Despite being considerably larger than a tyrannosaurus rex, the freshly-discovered dinos were herbivores, and belong to the group titannosaurida, or titanosaurs.

“It’s like two trucks with a trailer each, one in front of the other,” Jose Luis Carballido of the Argentinian museum Museo Paleontologico Egidio Feruglio said of the new species.

In fact, the remains are some of the most complete of the genus to have been identified so far. “There are plenty of remains and many were nearly intact, which is unusual,” Carballido observed. “In fact, the fossils from other giant titanosaurs were few and fragmented.” 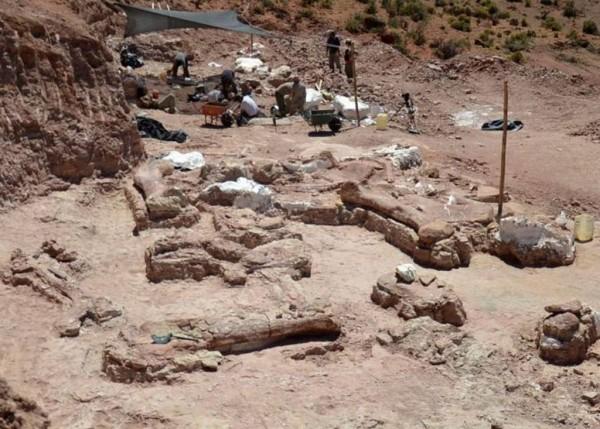 Bones from seven individual titanosaurs were identified at the site in central Chubut Province, Patagonia Argentina. The environment is believed to have suffered droughts, leaving the dinosaurs either too dehydrated to move, or alternatively trapped in drying mud.

They had some company, however. More than sixty teeth from carnivores were also gathered from around the oversized animals, suggesting that they quickly became prey for dinosaurs with tastes for meatier meals.

An official name for the new species is yet to be assigned.

Dating of the remains indicate the dinosaurs roamed around 95 million years ago, during the later Mesozoic Era. The site itself still has plenty of potential for further discoveries, with researchers saying that they are currently only a fifth of a way through excavation work.