Lamborghini has sliced the roof off its hybrid V12 hypercar, with the Sián Roadster offering another supercapacitor-powered option. Based on the striking Sián coupe unveiled last year, this open-top version sticks offers 819 horsepower and promises 0-62 mph in under 2.9 seconds.

Top speed is in excess of 217 mph, Lamborghini promises. However it’s not just about pure figures on paper: it’s also about how that power is delivered to the road, and there the V12 hybrid system comes in. 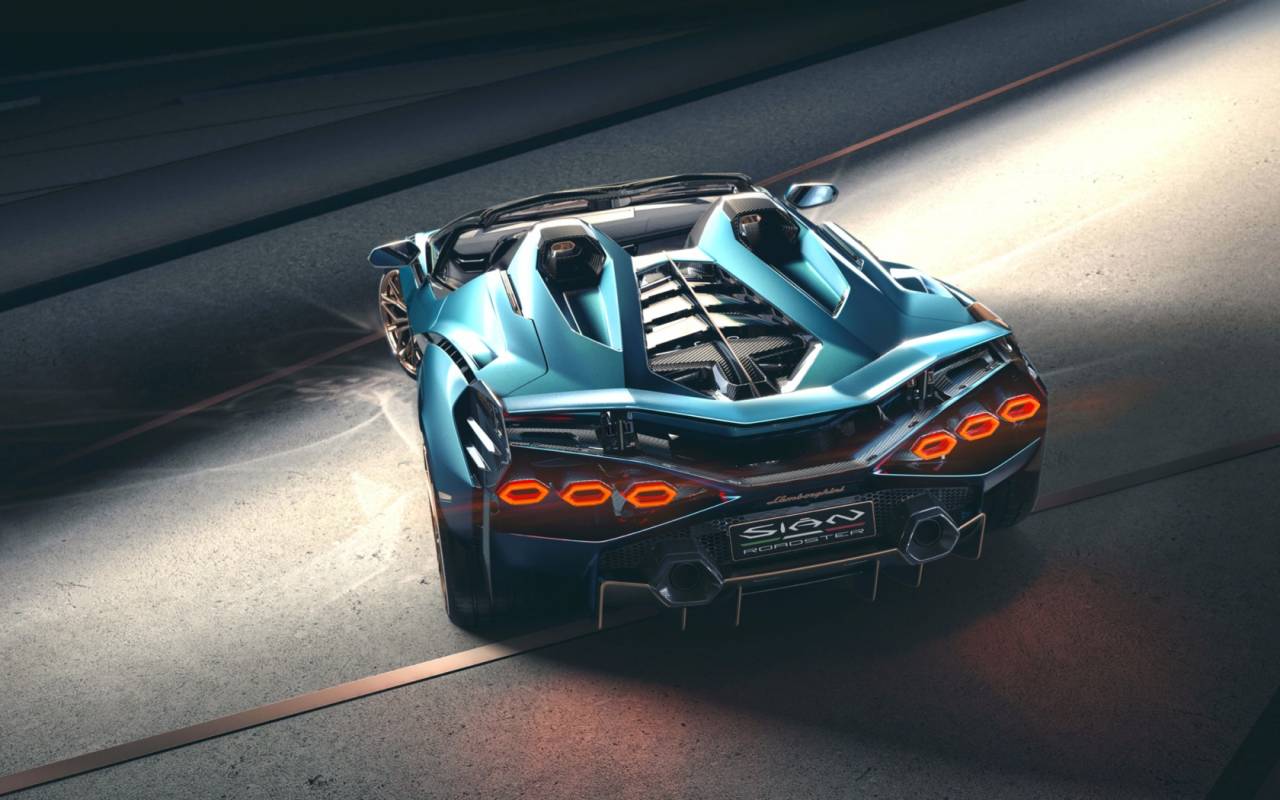 On the one hand there’s a twelve cylinder gas engine positioned right behind the driver and passenger. A 48-volt electric motor is incorporated into the transmission: it’s powered using a supercapacitor rather than the more commonplace lithium-ion battery. That’s located in the bulkhead between the cabin and the V12 engine.

The upside to using a supercapacitor is power density and weight. It can store ten times the power of a lithium-ion battery, and in the Sián Roadster specifically is three times more powerful than a battery of the same weight, or three times lighter than a battery of the same power. Overall, both supercapacitor and e-motor add under 75 pounds to the overall weight of the car. 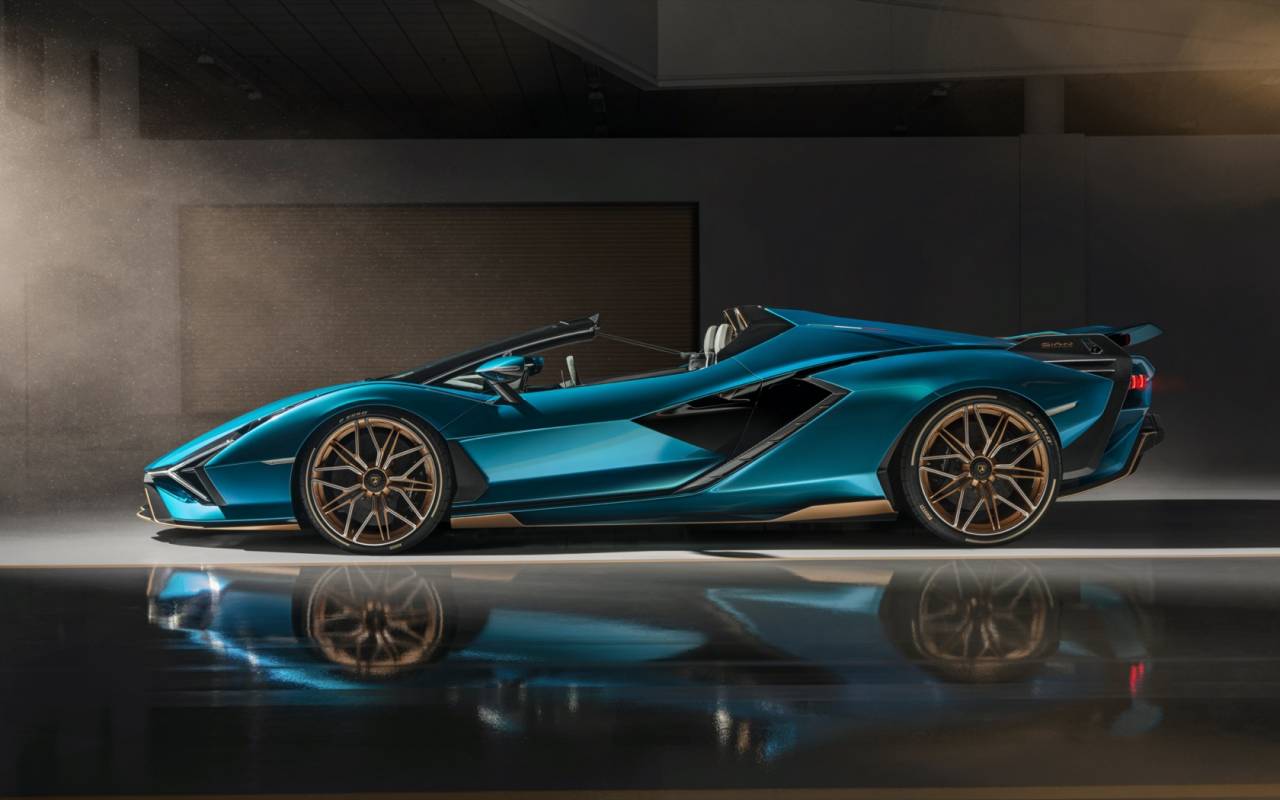 While it only contributes 34 horsepower on its own, Lamborghini is making maximum use of the e-motor’s presence. For a start, it’s called into use for low-speed maneuvering, such as when reversing or parking. During gear changes, meanwhile, the e-motor is used to smooth over the momentary dip in torque as the mechanical gearbox switches ratios.

Instead, Lamborghini promises, there’ll just be the sensation of smooth, seamless acceleration. No jolts or jerks. 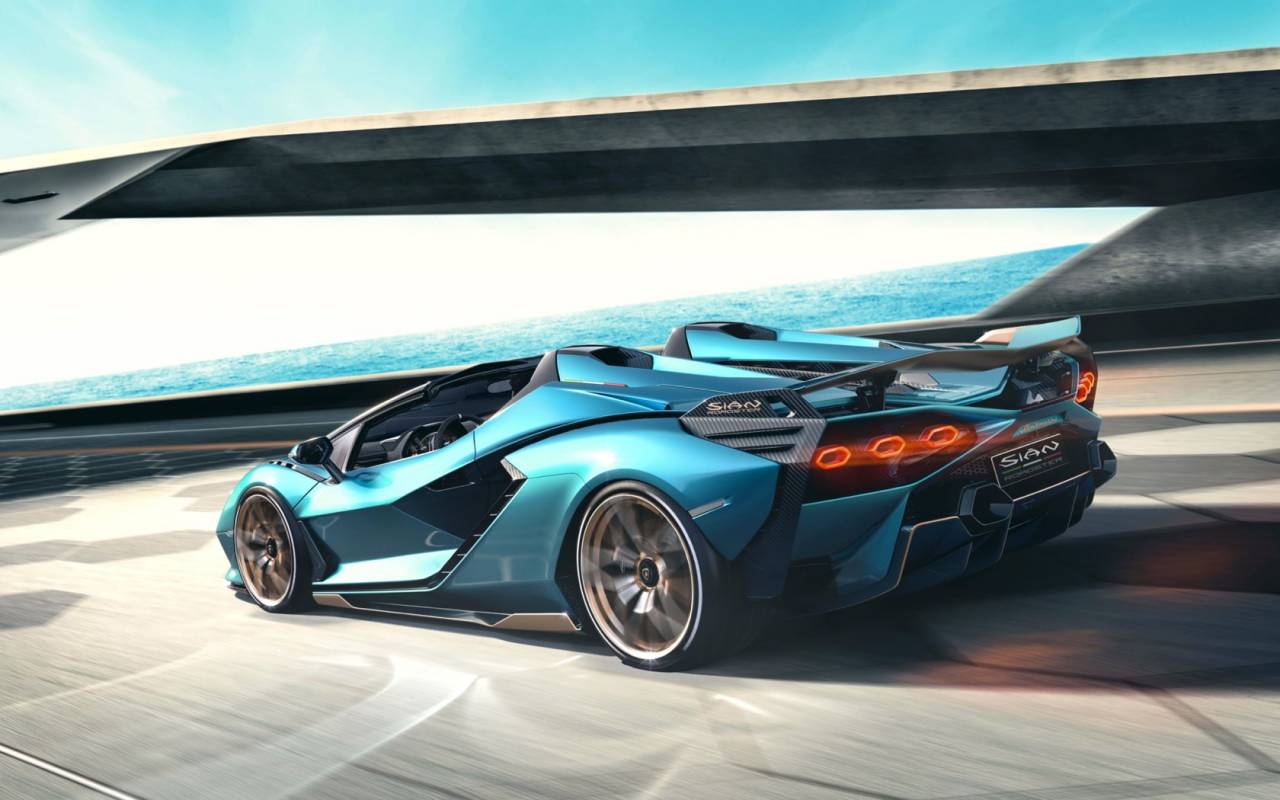 When braking, there’s a regenerative power system designed specially for the car. Since the supercapacitor can be charged and discharged at the same rate – unlike a li-ion battery – it can effectively be fully charged every time the Roadster brakes, Lamborghini says. That power is then instantly available as a power boost for accelerating. From just over 80 mph the e-motor automatically disconnects, which the automaker says improves elasticity.

Outwardly, there’s no mistaking the Sián Roadster for anything less than something special. Lamborghini looked to styling cues from the original Countach, for example, in how the lines running from the cockpit to the rear are poised; bold Y-shaped headlamps distinguish the front, complete with an integrated carbon fiber splitter. 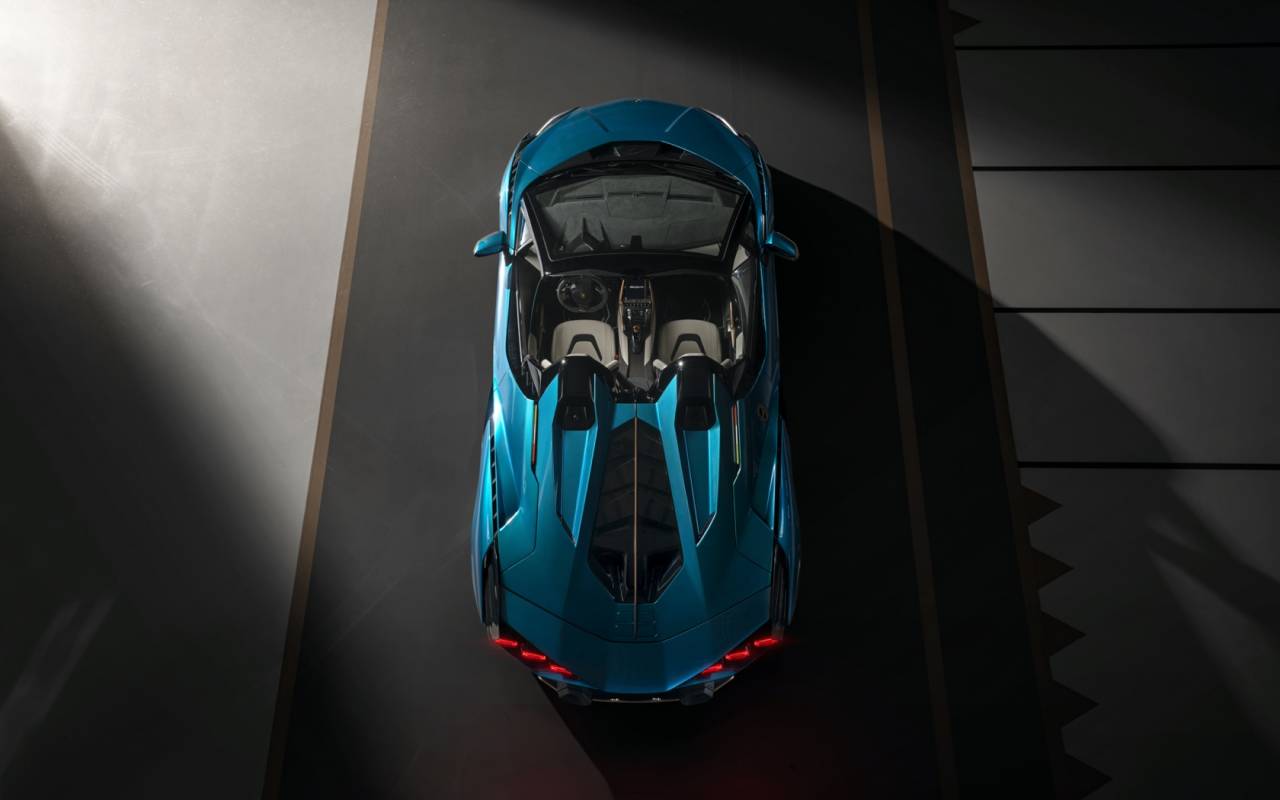 There’s no aero fakery here: everything is designed with real aerodynamics in mind. That includes how airflow is directed through the front splitters, and through the hood, along the side intakes, and outlets, and then over the rear spoiler. Smart-material elements are used for the rear active cooling vanes, which rotate into position when the exhaust temperature is sufficiently high.

The Countach again inspires the rear, with six hexagonal taillamps. As for the sizable rear wing, it extends out of the bodywork when required. 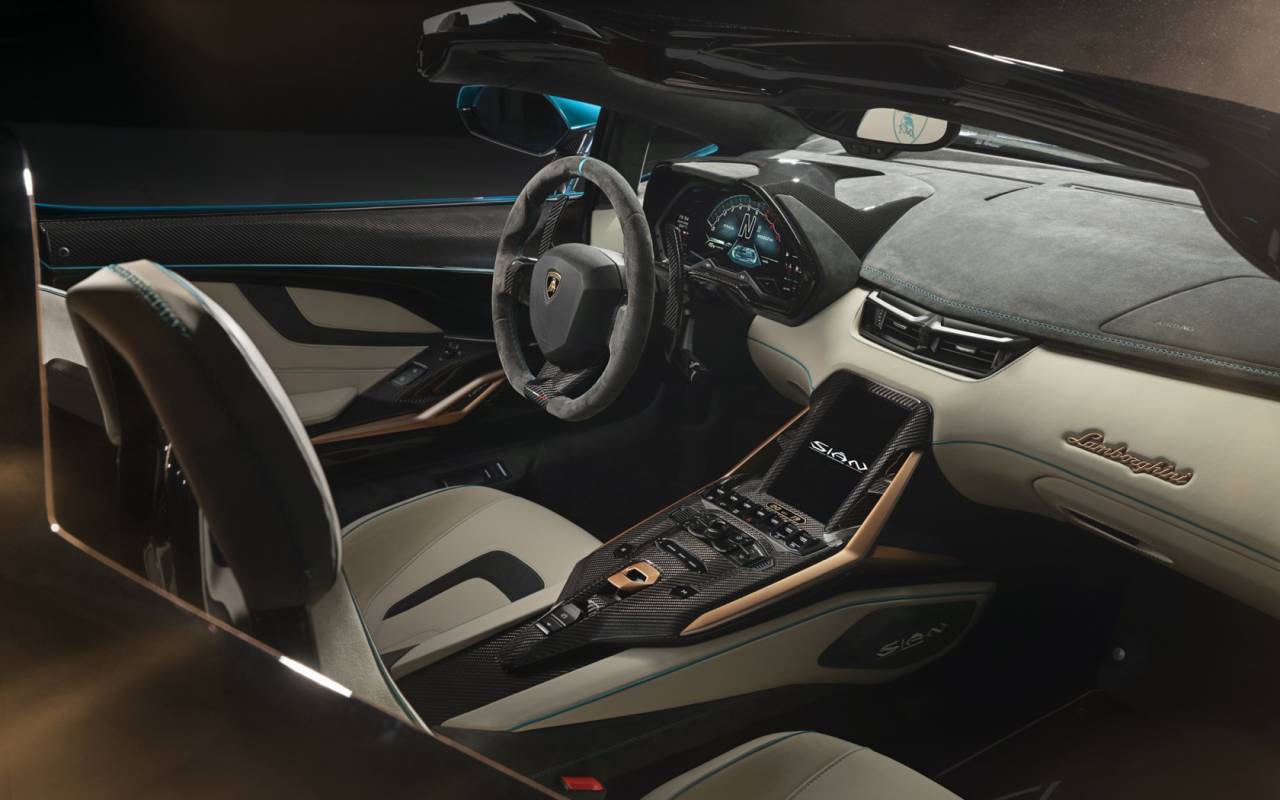 Inside, there’s no hood mechanism to worry about, because the Sián Roadster doesn’t have a roof at all. Lamborghini has used things like 3D printing for the air vents, along with lashings of leather, Alcantara, and carbon fiber. 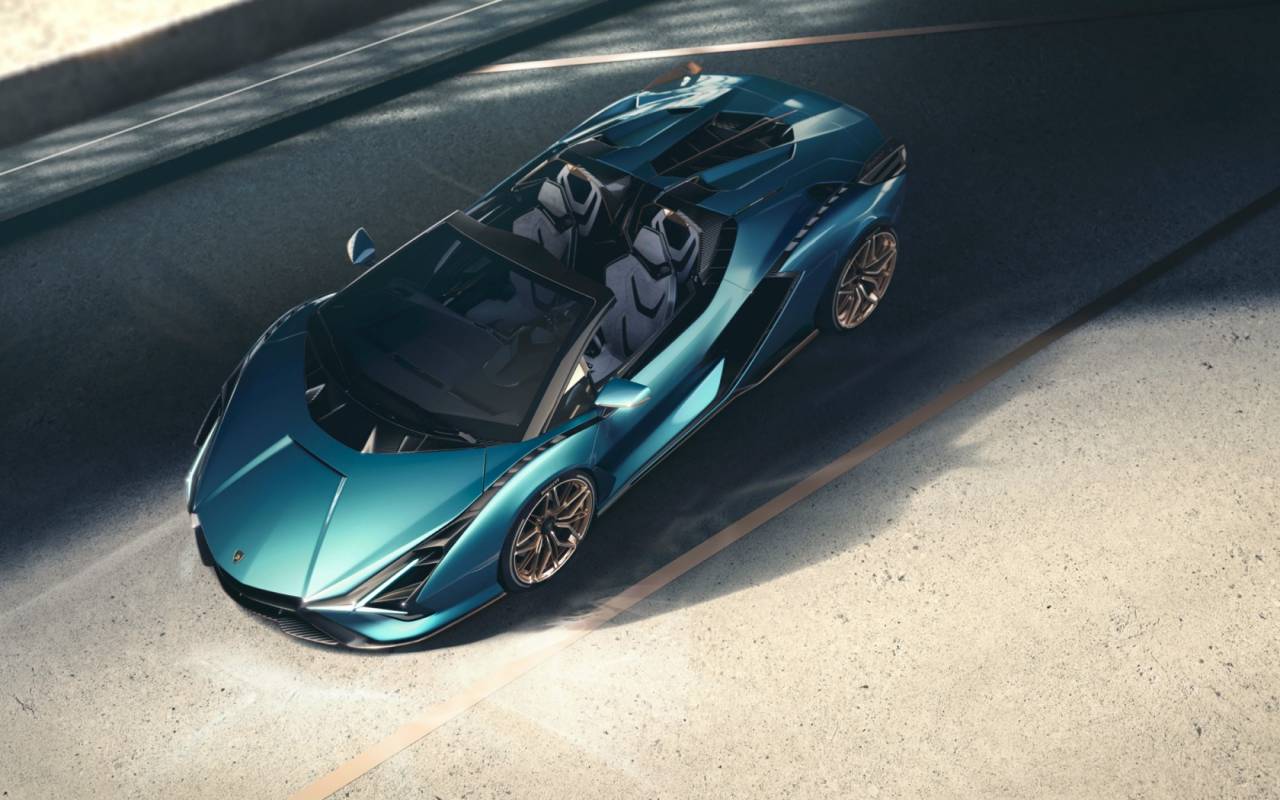 Buyers will get to customize both the exterior and interior finishes completely, something which won’t be quite as time-consuming as you might suspect since Lamborghini is only making 19 of the cars. All have been sold already, leaving the rest of us to look on enviously from the side of the road.