Lamborghini is teasing its latest hypercar, and where better for the new Lamborghini SCV12 to make its camo-clad debut than on the track. That, after all, is the coupe’s intended stomping grounds, where the Italian automaker plans to let loose the most powerful naturally-aspirated V12 it has developed so far.

In fact, you’re looking at over 830 horsepower, Lamborghini claims. It’s doing that by adding what’s known as “aerodynamic supercharging” at high speed, a process which doesn’t actually require a separate, mechanical supercharger. 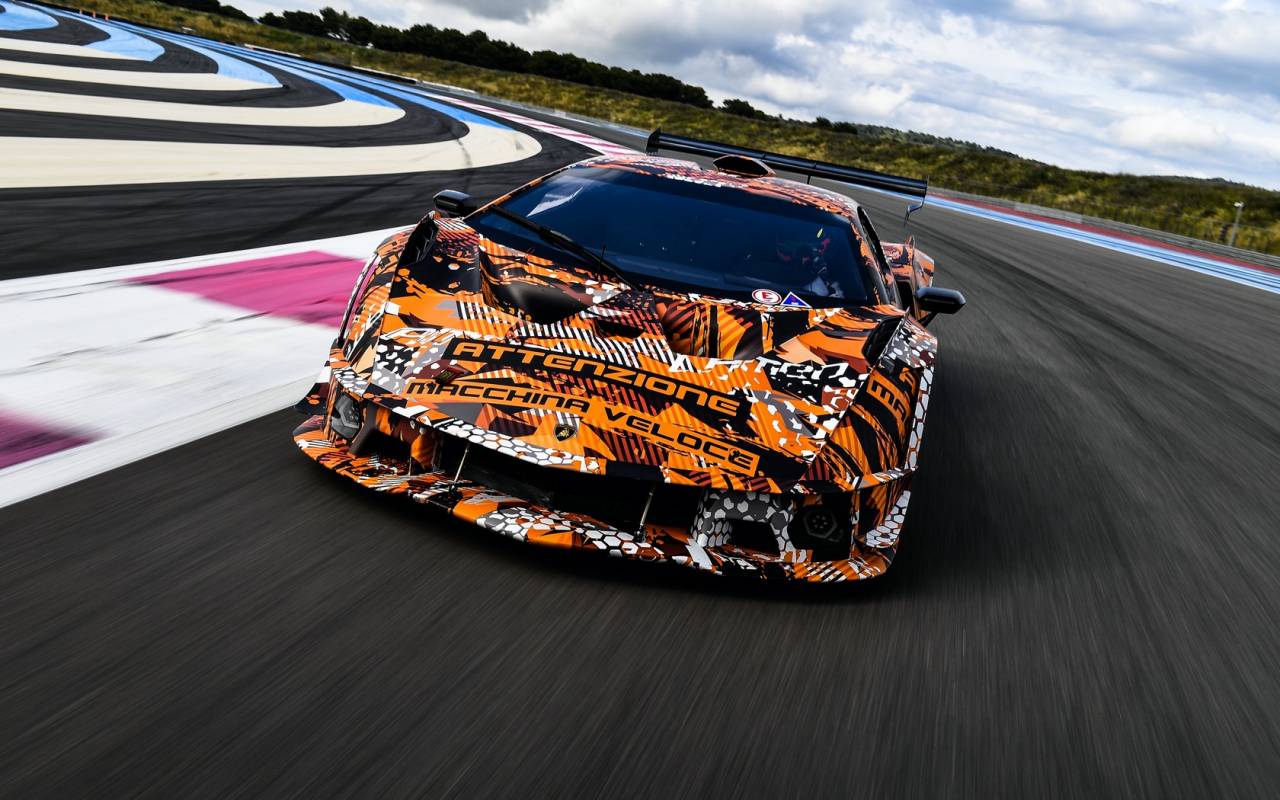 Instead, there’s a huge double air intake on the front hood of the SCV12, with a central rib that directs airflow from the ram-air intake scoop on the car’s roof. As the hypercar drives, the dynamic air pressure created then increases static air pressure in the engine’s intake manifold. The result is greater airflow through the engine, increasing power like a traditional supercharger would but without the actual parts.

Of course that works best when you’re at high speed, and for that you really need a track. Lamborghini says the SVC12 will be track-only, in fact, and isn’t intended for public roads. 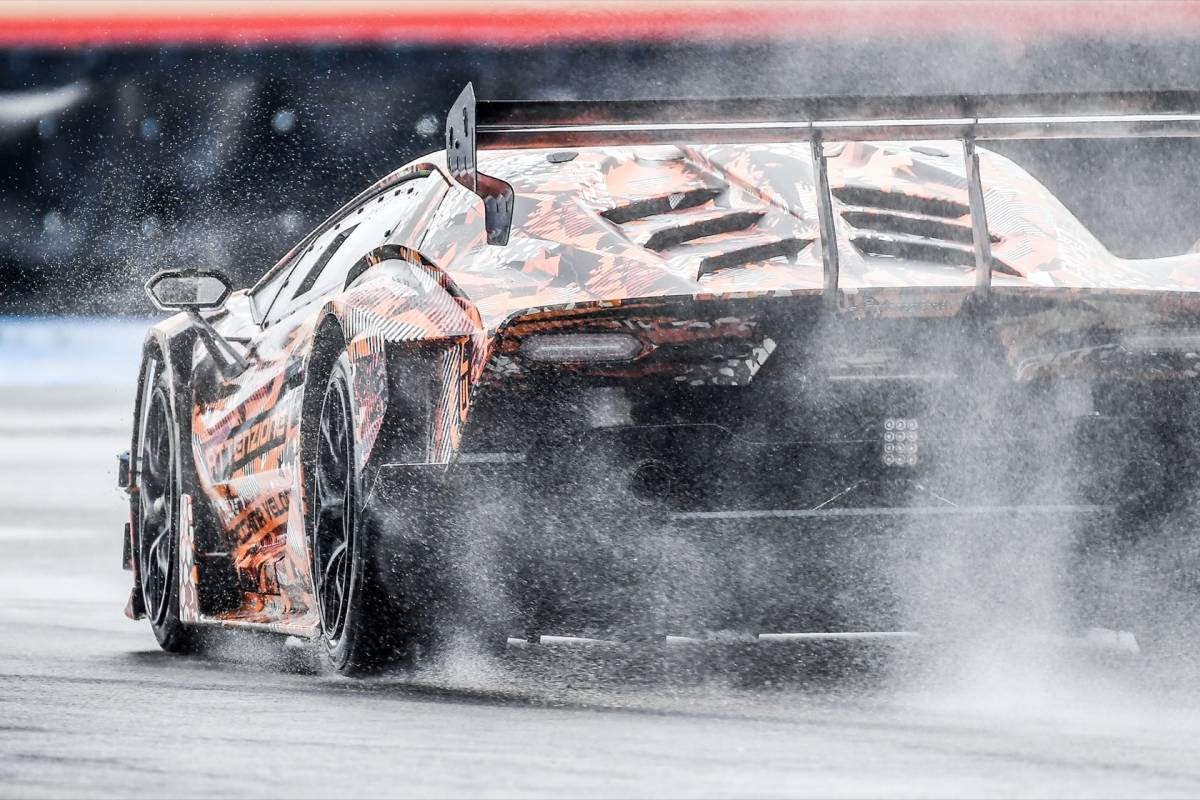 That also helps explain road-unfriendly features like the oversized splitter at the front, together with the lateral flicks and vertical fins on the side sills. A custom carbon fiber rear wing sits proudly at the back, echoing the fully carbon fiber chassis underneath. According to Lamborghini, it all helps the SCV12 achieve higher levels of downforce than a GT3 car. 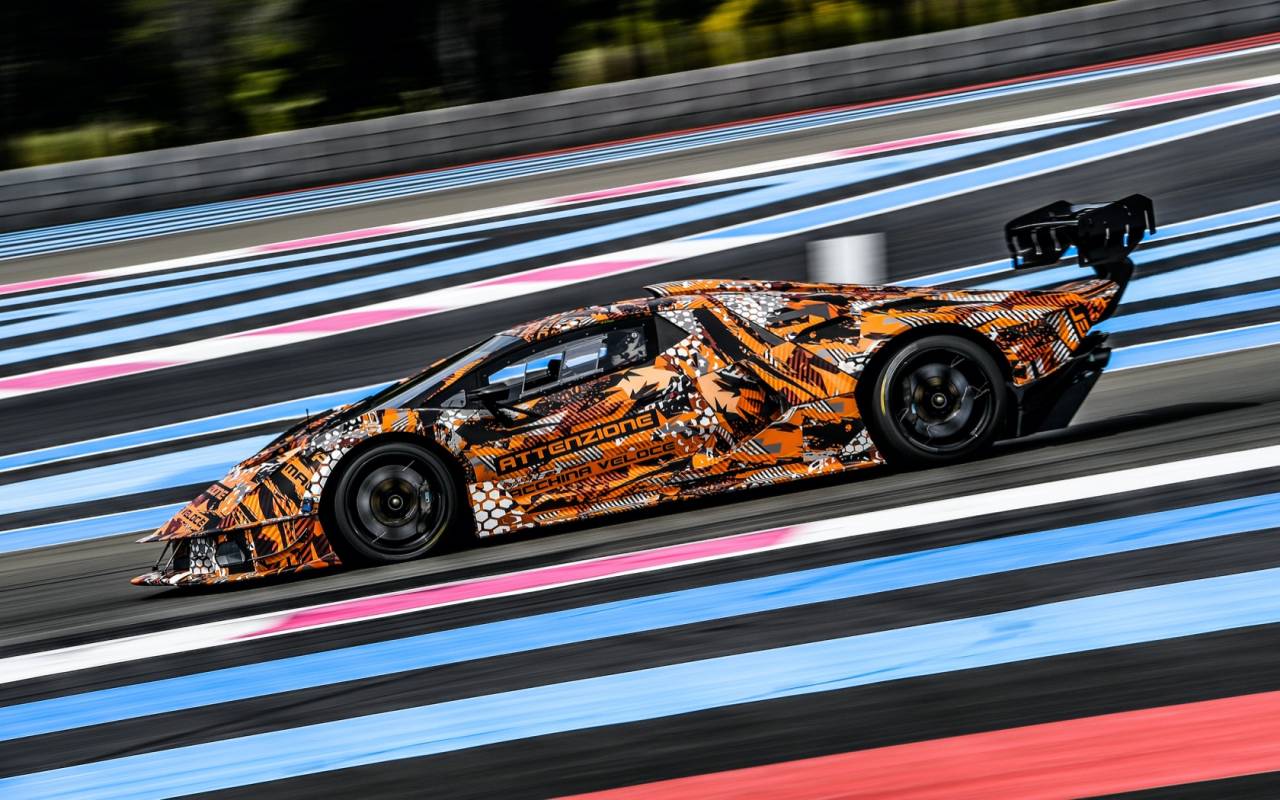 The V12 is hooked up to the rear wheels, via a sequential six-speed gearbox. That has been developed as a structural element within the chassis in its own right, helping to cut overall vehicle weight and improving the weight distribution. In turn, the pushrod rear suspension system is installed directly to the transmission. 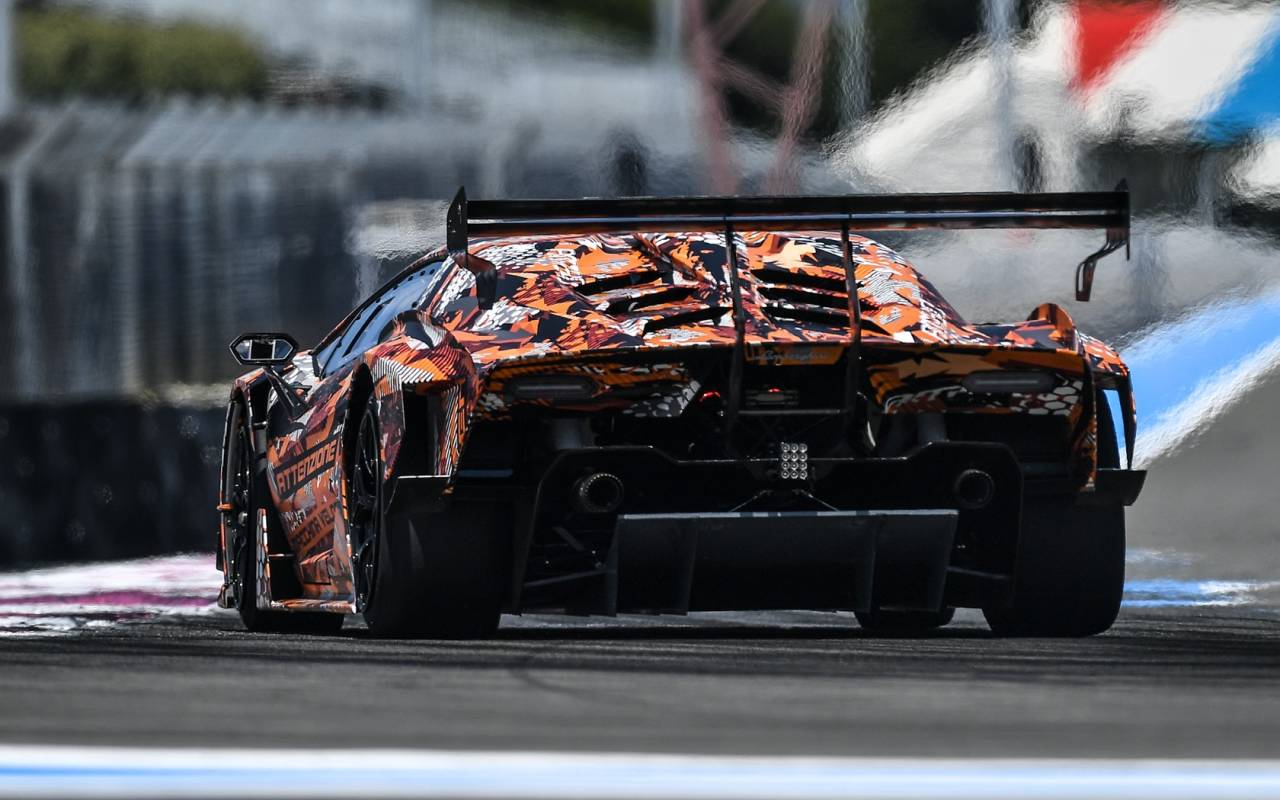 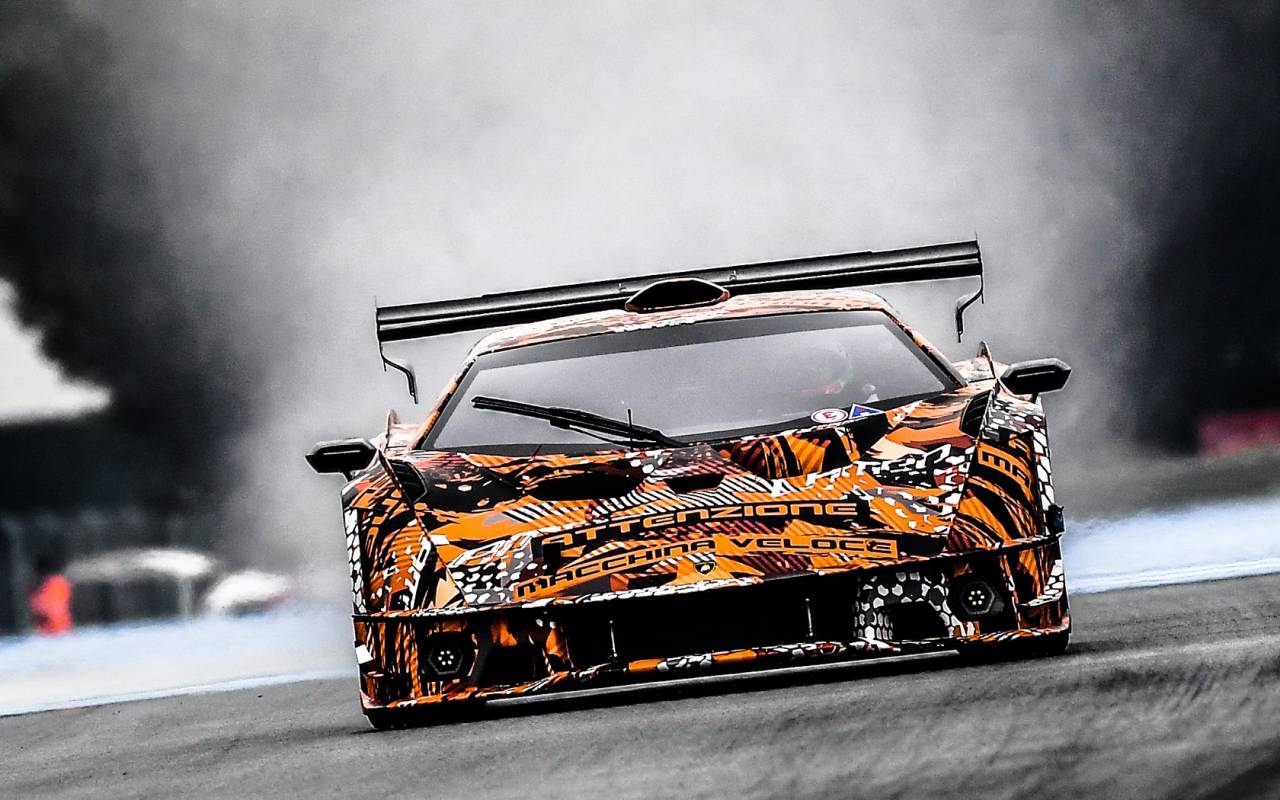 It’ll be an exclusive ride, certainly. SCV12 will be produced within the Lamborghini Squadra Corse factory in Sant’Agata Bolognese, and only a limited number are set to be manufactured. Buyers won’t just get a set of hypercar keys, but also access to advanced driving programs across a variety of circuits across the globe. They’ll have Emanuele Pirro – the five-time winner of the 24 Hours of Le Mans, not to mention Lamborghini Squadra Corse Special Projects Consultant – to tutor them, plus the Squadra Corse engineers on hand to keep the SCV12 at its best. 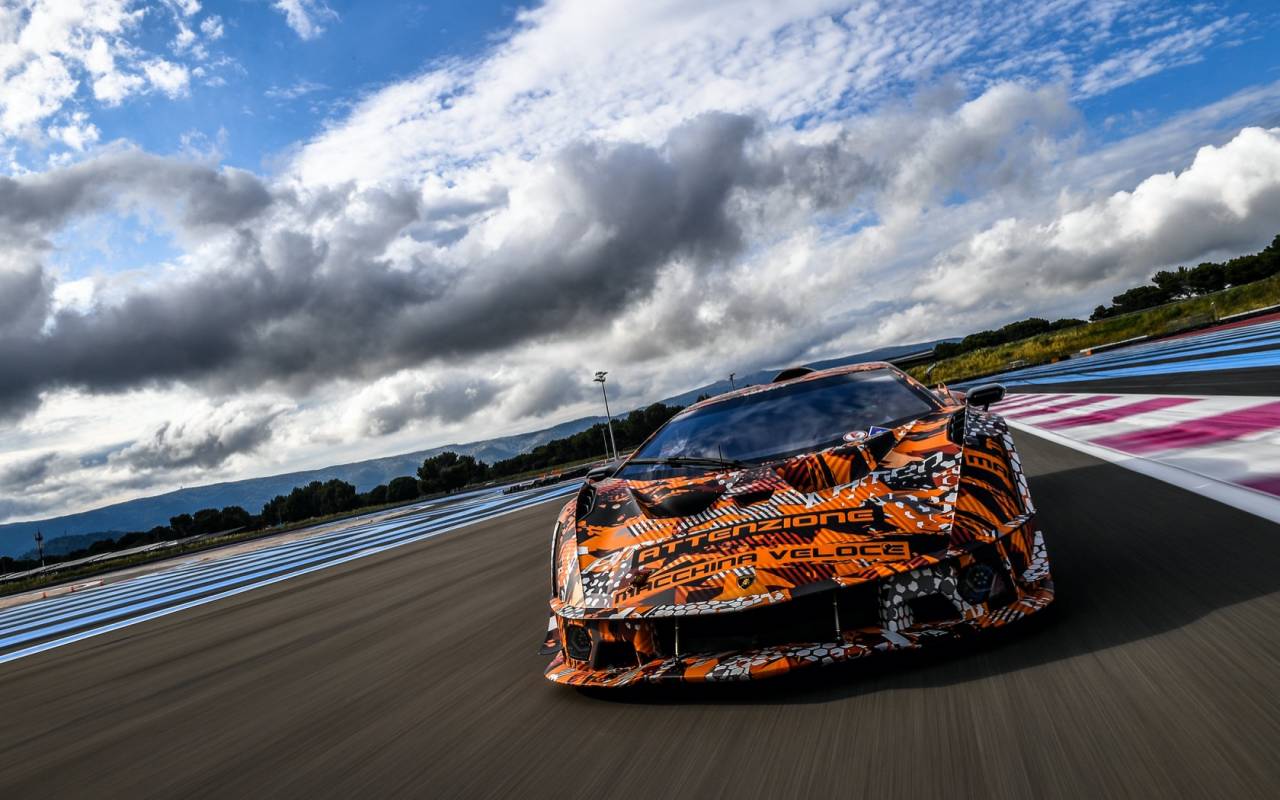 The full unveil of the hypercar is scheduled to take place in summer 2020. Then we’ll also hear more power and performance details, along with just how many SCV12 will be made – and how much membership of that exclusive group will actually set owners back.